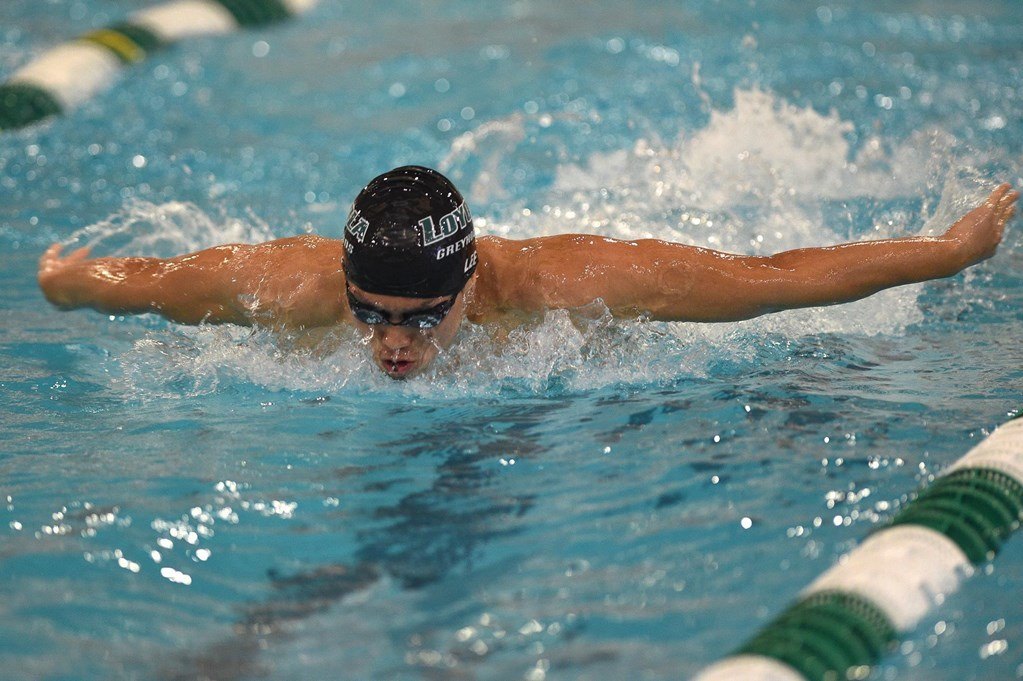 The Loyola (Md.) men and women swept American and VMI in a tri-meet Friday night in Baltimore. Current photo via Loyola Athletics

Both teams are back in action Saturday, hosting Mount St. Mary’s University at noon.

“I’m satisfied with how we performed tonight as a team,” said head coach Andrew Bretscher. “We knew that execution would be the key, and we did what we needed to do to come home with a victory over American on the men’s side.”

“It felt great to finally race some teams. We had tough opponents that forced us to swim at our best. It was great to see four varsity school records fall at the first meet of the year. It is even more impressive that they were all broken by rat (freshmen) athletes.”

“Our divers made a big mark in the competition. John Reed won the 1m event at his first-ever diving competition over some experienced divers so that says great things about our divers and what Coach Timmes is doing for them.”

“We are going to get some rest tonight and try to do it all over again tomorrow at noon. Mount St. Mary’s is a very strong team, so tomorrow will be close. If we can pull it together again, it will be a great home opener.”

BALTIMORE – Sung Lee and Emma Schouten both won three events for the Loyola University Maryland swimming and diving teams, as the Greyhounds men and women opened the 2018-2019 season with wins over American University and Virginia Military Institute.

Loyola won a combined 28 events out of 32 in the meet with the men taking first in all 14 swimming races, and the women earning top honors in 12 races and both diving events.

The Greyhounds women opened the meet with a dominant victory in the 400-yard medley relay. Elizabeth Walsh, Devin Cronin, Anne Hayburn and Megan Dickey combined for a time of 3:54.41, while the Greyhounds’ ‘B’ entry – Taylor Ament, Emma Scouten, Molly Davis and Sophie Jahan – took second in 4:00.64.

Three Loyola women finished second through fourth in the 200-yard freestyle, led by Aly Pacitti‘s 1:58.21 that was just three-hundredths of a second off Alex Brosvik‘s winning time. Lauren Joyce was third for Loyola (1:59.92), while Brooke Sharkey finished a place behind (2:00.30).

Davis won the first individual event of her collegiate career, besting the field in the 200-yard butterfly (2:10.25), topping two American swimmers by more than four seconds. Grace Huckenpoehler pulled into the wall fourth in 2:15.44.

Dickey won the 50-yard freestyle, getting to the wall just six-hundredths of a second faster than Jahan. Dickey returned to the pool later in the evening to post another victory, beating the field in the 100-yard freestyle (53.05). Jahan was fourth in that race (54.99).

Anne Hayburn led off the 200-yard freestyle relay for the women, and the Greyhounds finished with a winning time of 1:38.37. Jahan, Gabrielle Clarkson and Dickey swam the final three legs of the race.

In men’s action, Mark Boran, John Callaghan, Sung Lee and Reid Hussey opened up the meet with a win in the 400-yard medley relay, finishing in 3:28.96 to hold off Loyola’s ‘B’ entry – Jonathan Brooks, David Sears, Richie Kogut and Colin Anderson – that finished in 3:31.74.

Mark Shoemaker won his initial individual event for the Greyhounds, placing first in the 200-yard freestyle (1:46.37); John Sakovich was third in the event (1:48.58).

Stephen Machak set an American Paralympic SB4 record in the 50-yard backstroke with a time of 56.20.

Hussey was another double-winner for the Greyhounds in the season-opener, winning the 500-yard freestyle in 4:42.32, while his classmates Shoemaker and Basalo were second (4:52.07) and fourth (4:54.92), respectively.

The Loyola men’s 200-yard freestyle relay of Jimmy Hayburn, Anderson, Conor Rutigliano and Clisham won the final event with a time of 1:26.65.

BALTIMORE – Alex Brosvik, Ellie Kight and Ben Cook each won events as American University competed in a triangular swimming and diving meet with Loyola Maryland and VMI on Friday.

The American women split the dual-meet scoring, losing to the Greyhounds, but beating the Keydets. AU’s men’s team went 0-2 in the team scoring.

• Brosvik, who participated on four winning relays at last weekend’s Potomac Relay Invitational, won the 200-yard freestyle in 1:58.18, earning the win by 0.03 seconds.