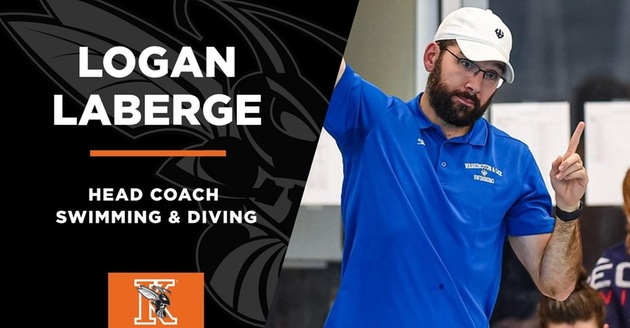 LaBerge comes to Kalamazoo College from Washington and Lee University, where he was an assistant head coach and an associate professor since 2014. Current photo via Kalamazoo Athletics

LaBerge comes to Kalamazoo College from Washington and Lee University, where he was an assistant head coach and an associate professor since 2014. Since he began with the Generals in 2014, the program has set 76 team records, achieved over 100 NCAA time standards, won two NCAA III individual national championships, and earned a program-record seventh place national finish in 2017. In addition, as recruiting coordinator, LaBerge has led the efforts of recruiting 126 student-athletes to the program through last season.

“We are happy to introduce Logan LaBerge as our new head swimming and diving coach and aquatics director,” said Becky Hall, director of athletics. “His energy, knowledge, and readiness to be a head coach really resonated with us during the search process. I look forward to welcoming Logan, his wife, and daughter into the Kalamazoo community soon.”

Prior to Washington and Lee, LaBerge was an assistant coach at the University of Mount Union from 2012 to 2014. In his two years with the Purple Raiders, the program set a combined 22 school records and achieved nine NCAA time standards.

LaBerge began his coaching career as a volunteer coach at Miami University (Ohio) while working on his master’s degree from 2010 to 2012. Team members broke a combined seven school records and had an NCAA Division I qualifier as well as six 2012 USA Olympic Trial qualifiers.

LaBerge earned a bachelor’s degree in psychology at The College of Wooster in 2010. He was a four-year varsity letter winner and was voted team captain for the 2009-10 season. He established school records in the 100 ad 200 Backstroke, lowering each record on three separate occasions. LaBerge was also a member of the 200 and 400 Medley Relay record-holding teams on eight separate occasions. LaBerge was also an NCAA Division III provisional qualifier in the 100 and 200 Backstroke. He earned a master’s degree in sports behavior & performance at Miami University in 2012.

“I am so excited and grateful to be chosen to lead a new chapter in the life of the swimming & diving program at Kalamazoo College,” LaBerge said. “Through rigorous classes both at home and abroad as part of its curriculum, K has established itself as an institution that prepares its students to be successful and truly global citizens. These academics, combined with an investment in a brand-new natatorium, make this program one that is poised to build upon the successes of the past and usher in a new standard on campus, in the community and beyond. I am grateful to the search committee and Athletic Director Hall for this opportunity and cannot wait to get started.”

K College just got a brand new natatorium so this guy is coming in at a great opportunity.