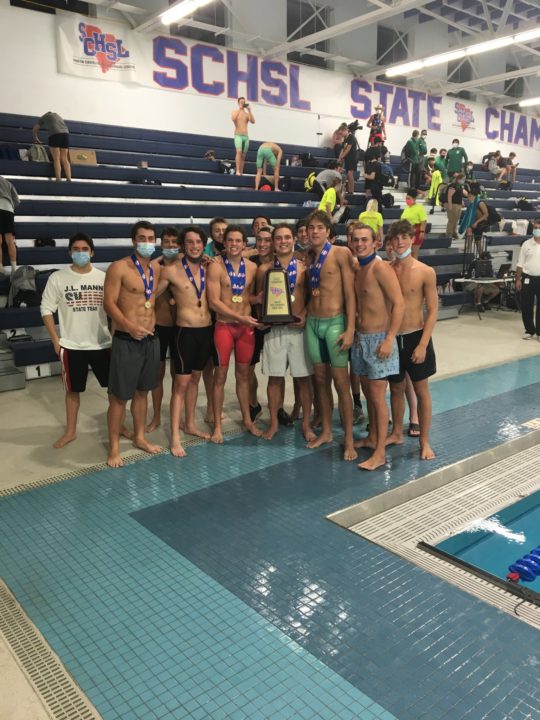 Austin Lockhart and Harrison Clinton both broke meet records at the SCHSL 5A Championships, while JL Mann defended its team title. Current photo via Charlie Mayfield

On October 9, Fort Dorchester High School was forced to pull out of the meet after one of their swimmers tested positive for coronavirus. A member of the 5A division, Fort Dorchester finished 21st overall at last year’s meet.

The 5A Division includes the largest schools of the SCHSL’s three swimming divisions. Schools competing in this division are the largest in the league, under its recent reclassification that was based on enrollment numbers as of mid-2019.

After a 2 point victory over Nation Ford last year, JL Mann ran away with the team title this year, finishing with a total of 376 points. The defending state champions finished over 70 points ahead of runner-up Wando.

En route to its victory, JL Mann showcased its incredible depth as the school only won two events throughout the entire meet: the 200 medley and 400 freestyle relays. However, 5 of its swimmers contributed 35 points or more, which significantly helped the point total.

In the 200 medley relay, JL Mann’s team of Bennett Parramore, Zach Zahorec, Sutton Vanderbloemen, and Ben Bannister combined for a time of 1:37.84 for the victory over runner-up Spring Valley. Notably, Bannister’s 50 freestyle split was significantly faster than anyone else in the field as he contributed a split of 21.12.

At the end of the meet, JL Mann got its other victory via the 400 freestyle relay. The foursome of Parramore, Tristan Bissetta, Julian Lazea, and Bannister narrowly beat Nation Ford for the victory, swimming a final time of 3:13.51. On Nation Ford’s relay, anchor Austin Lockhart split an impressive 43.60 to almost steal-away the victory.

Lockhart had a very good meet, finishing with 2 individual victories and 2 meet records.

In his first event, the 50 freestyle, Lockhart flew away from the field to finish in 20.27. With his swim, he broke the state meet record (20.71) set by Zach Piedt in 2014. Last season, Lockhart did not compete in the 50 during the state championship, instead opting to swim the 200 freestyle, where he finished second.

Next year, Lockhart is committed to swim for the US Naval Academy, where he will have an immediate impact on the roster.

In between Lockhart’s swims, another senior managed to break a meet record. In the 100 butterfly, Carolina Forest’s Harrison Clinton swam to a final time of 49.41 to chip Jordan Berry’s meet record of 49.79 set in 2008. Notably, it marked Clinton’s first time under the 50 second barrier, his previous best was a 50.35 from last year’s championships.

Later, Harrison claimed victory in the 100 breaststroke, finishing in a time of 56.84 to drop over 3 seconds off of his seed time.