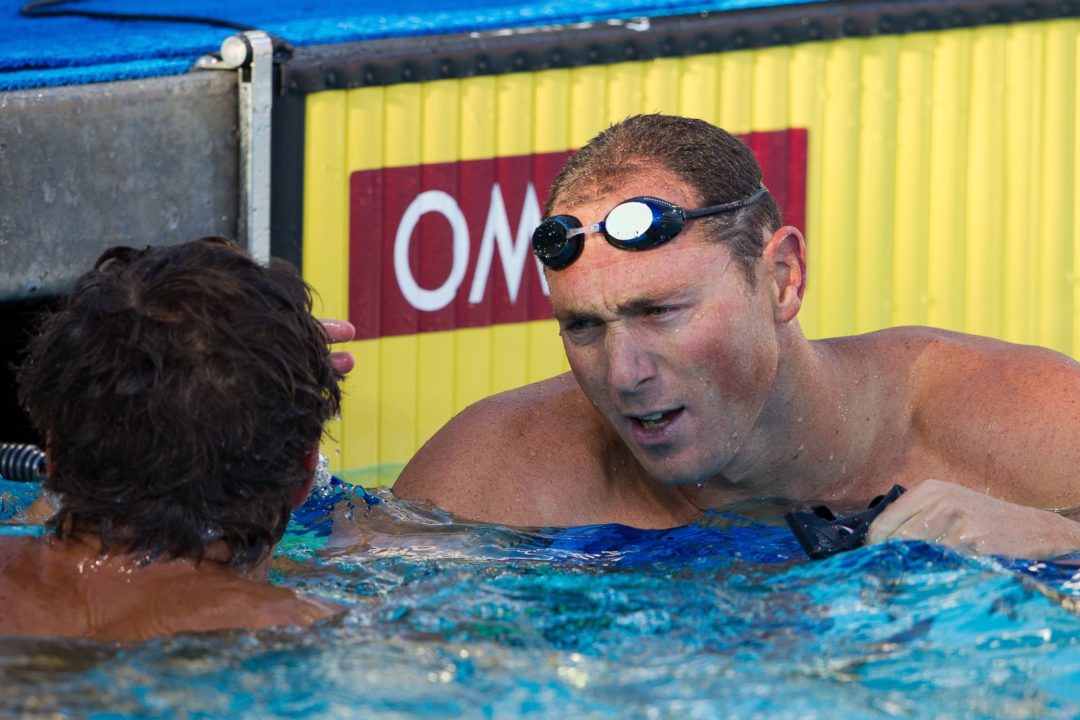 The Americans have assigned morning relay duties to Jason Lezak, Jimmy Feigen, Matt Grevers, and Ricky Berens, with Michael Phelps and Nathan Adrian (at least) starting off straight through to the finals.

As for the Australians, they’ve chosen to go with close to a full relay early on. James Magnussen, James Roberts, Tommaso D’Orsogna, and Cameron McEvoy taking prelims duties for the favorites. Magnussen and Roberts are the two best 100 freestylers in the world this year, and two fastest ever in textile suits.

And the other interesting lineup is the Brazilians, who have again gambled and left Cesar Cielo out of the prelims. They will go with Bruno Fratus, Nicholas dos Santos, Nicolas Oliveira, and Marcelo Chierighini.

After all the anguish above about Phelps, Lochte gave away the race. Too bad Phelps didn’t anchor.

The big question- Does Grevers have enough time in between the 100 back and 400 free relay? There are only 2 heats of girls 100 backstroke, and we need fresh legs that last 25. Scheduling does not work in his favor (or our favor). Heck of a swim this morning.

He’ll probably have at least one medal ceremony, right? How much time off did he have this morning? They’ve gotta put him on the final relay.

Here’s to hoping he lays off the legs and just cruises through to the final in back.

I mentioned Cielo because even if they put him on the relay they still wouldn’t have gotten a medal. Then only other team worth mentioning is the Russians after their morning swim.

Honestly, the race is between Australia, France and the US (If Phelps swims well). Everyone else besides maybe the Russians is a side note, even with Cielo

What does Cielo have to do with The Russians?

The entire coaching staff for Brazil should be sacked for incompetence. Missing the finals again by not swimming Cielo in the morning should be unacceptable.

Could not agree more..

Well, John Lohn from swimmingworld gave the award for “the dumbest decision of London 2012” to Brazilian coaching staff.

Is this a case of over confidence by the Brazilian staff or them trying to the best they can to qualify while dealing with a weeping prima donna they have on their hands who may care more about personal glory than the team, especially when the team probably doesn’t have a great shot at winning the gold right now and worried about getting “tired”?
This is not obviously the first time this has happened and one would think a half intelligent coaching staff would have learned their lesson the first time for sure at this level.
If he didn’t swim because he didn’t want to, then I hope Magnussen blows him out of the water in both races.… Read more »

CBDA staff are FAR FAR from being mildly inteligent.

Probably (90% sure) on Medley they will go full power till the beginning..

Seriously? Lochte could go 47.5 even though he has a 200 Free semi-final. I’m worried about Phelps. My line-up: Adrian, Phelps, Grevers, and Lochte!

Good splits from the Us team ….i am not so surprised . With a grt Adrian and a recovered Phelps , they surely can get very close to the aussies . I beleive in this team all the way .

How can no one be talking about Lochte? He could definately go 47.5 or better!

With that 100 Bk final so close to the relay, I really wonder if they are going to put Grevers on the night relay. Lezak won’t have a semi this session unlike Grevers, Berens, and Lochte.