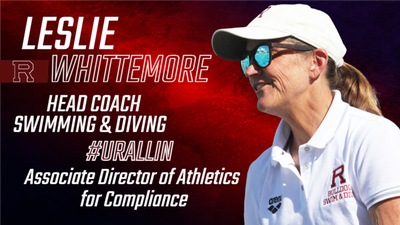 Whittemore was first named head coach of the program in 1996, and led the men's program to seven SCIAC titles and the women's team to three. Current photo via Redlands Athletics

REDLANDS, Calif. – It was announced today, by Director of Athletics Jeff Martinez that Associate Director of Athletics for Compliance and Head Men’s and Women’s Swimming & Diving Coach Leslie Whittemore, has stepped away from her duties with her last day on campus being next Friday, August 19th.

Leslie looks forward to devoting more time and energy to her family, while also pursuing other interests. It will be the first time in the history of the Thompson Aquatic Center (Opened in 1996) that there will not be a Whittemore on the deck.

“I will cherish my memories of Bulldog Aquatics,” Whittemore explained. “The student athlete and colleague connections are what I will miss most. I am excited to watch more of my own kids’ athletic pursuits, and cheer on the Dawgs from the stands.”

Whittemore and Bulldog Swim and Dive have been synonymous for the majority of the past 32 years. She arrived on campus in the fall of 1990 as a student-athlete and had an outstanding four-year team MVP and All-SCIAC career. After earning her degree in Psychology, she became the first aquatics graduate assistant in the program in the fall 1994 and then in June 1996, assumed her current full-time role as Head Coach for the Men’s and Women’s Swimming & Diving programs. She stepped away from the head coaching role from 2010-2014, while her children Tait and Maggie were younger, but returned to provide leadership and direction to the programs in August 2015.

While under her direction, the men’s program won seven SCIAC titles, the women’s program won three SCIAC titles and each program finished in the top three of the final SCIAC Standings all but three times during her 21-year career. Her combined SCIAC dual meet record over her tenure is 210-63 and her combined overall dual meet record is 236-101. The career records and list of individual record holders, All-Americans, and NCAA Championship qualifiers is very extensive and her teams have always consistently been recognized for their commitment to academics performing as one of the top academic programs in the country along with earning numerous Academic All-American achievements.

Leslie has also been a valuable asset to the institution, contributing to Bulldog Athletics in other ways. She served as the Senior Woman Administrator from 1998-2006, coordinating all the eligibility for the department. She then returned to her eligibility coordinator role in 2011 and has provided insight, stability and integrity ever since. According to Martinez, “Leslie’s insight, perspective, passion, integrity, and fairness are matched by very few coaches and athletic administrators that I have been associated with during my tenure. She is without a doubt, a tremendous colleague for all of us to have enjoyed and benefitted from.”

Whittemore will stay connected to Bulldog athletics as she plans to continue her Vice Chair role on the Hall of Fame Committee.

Current assistant coach Jonathan Champagne has accepted the role as Interim Head Coach for Men’s and Women’s Swimming and Diving programs for the upcoming year. He and assistant Ben Field will look to complete the coaching staff for the 2022-23 season. The compliance and eligibility responsibilities will be taken on by Associate Director of Athletics, Rachel Roche.

The Bulldogs Athletic Department thanks Leslie for her dedication and passion she has provided the institution and wish her the best in the future.

Congratulations on a great coaching career Leslie! I was always impressed with your teams competitiveness and passion.