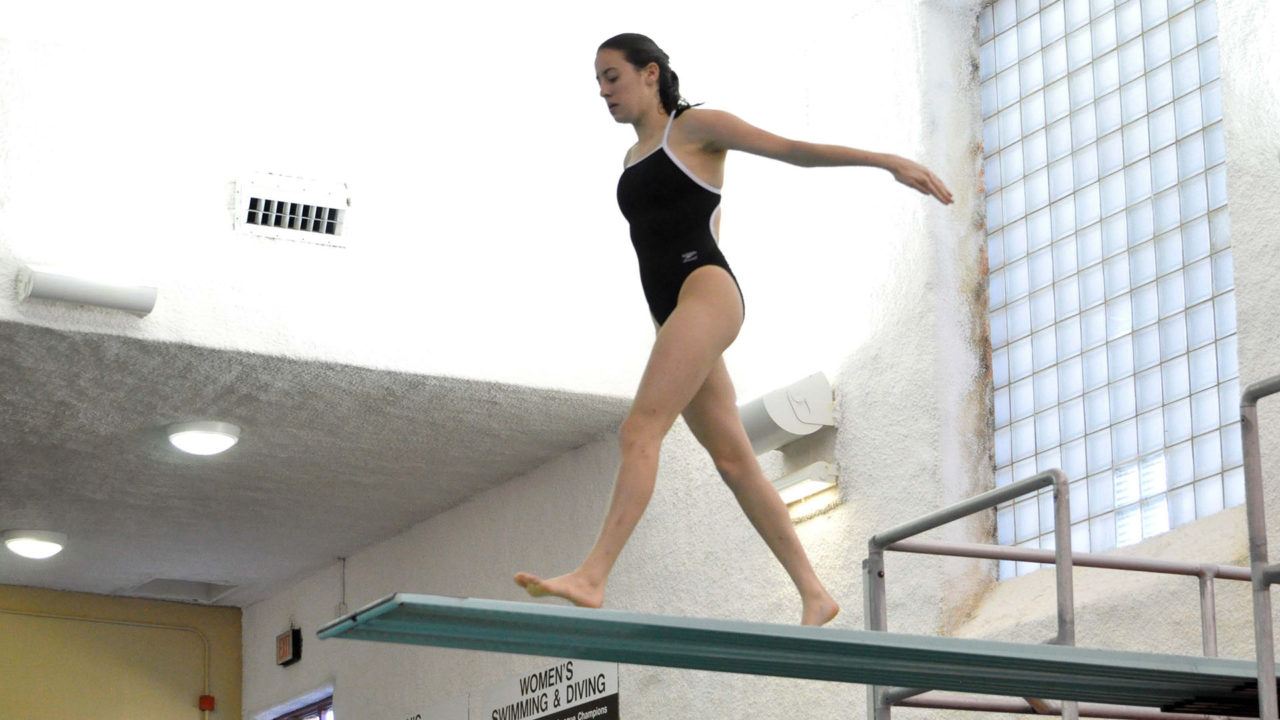 EASTON, Pa. — Different year, same story for the Lehigh women’s swimming and diving team against Lafayette on Friday night, as the Mountain Hawks won their 11th straight meet over the Leopards, 224-68.

Patriot League Female Swimmer of the Week Ann Foley continued to dominate in the pool with more outstanding performances on Friday night. She took home first place honors in the 200 free with a time of 1:48.14, beating out teammates Courtney Ferreira and Samantha Gallego. Foley also won the 50 free event with a time of 23.39. Payton Miles came in second with a 23.68, while Evie Gieseman finished third at 24.19.

Foley also came through with a victory in the 100 free at 50.45, while Payton Miles finished second at 51.67 and Olivia Giampietro finished third with a time of 52.18.

Ferriera made history on Friday night, the only member of both men’s and women’s teams to capture a school record, with her performance in the 100 IM, a 57.50, beating Julianne Koch‘s record of 58.39 set in 2017.

Tori Connolly won the 1000 free event with a time of 10:14.51, good enough to break the Weinstein Natatorium pool record set by Lehigh’s Allison Rolish in 2006.

The 200 medley relay team of Anna Francisco, Allison Morel, Malia Wolf and Miles led off the entire meet with a victory to a time of 1:44.07, a Lehigh-Lafayette meet record. Francisco also broke the meet record for the 50 backstroke after leading off for the event.

In addition to the other stellar nights from many individuals, senior diver Rayna Smilowitz qualified for the NCAA Diving Zone Championships in the one-meter dive. Her 266.08 was good enough for second place in the event.

The women’s win is their fifth straight on the season, improving Lehigh’s season record to 5-1 on the year.

It was another dominant performance for the Lehigh men’s swimming and diving team, who defeated Lafayette on Friday night 202-80 for their 27th straight victory dating back to the 1991-92 season.

Patriot League Male Swimmer of the Week Walker Wilson, along with freshman Connor Sept, junior Teddy Smith and freshman Glenn Lasco led off the meet with a win in the 200 yard medley relay to a time of 1:32.51. Wilson, who led off the relay, broke the Lehigh-Lafayette meet record for the 50 yard backstroke. In addition to the meet record, Lehigh also broke the Weinstein Natatorium record.

Kevin Fleck, Greg Gardner and Patrick Champagne finished as three as the top four finishers in the 1000 free. Fleck won the event with a 9:28.99. Fleck’s time broke Lafayette’s pool record, previously held by Binghamton’s David Holmes in 2007. Fleck also won the 500 free event with his winning time of 4:36.16.

Glenn Lasco continued his stretch of dominance in the 50 free with a first-place time of 20.82, beating out Greg Giannella by 0.16 seconds. Lasco also won the 100 free event with a time of 42.25, beating out fellow freshman Joey Rogers by 2.22 seconds. Finally, Lasco picked up a big win in the 100 individual medley with a victory at 52.23.

It was James Mauk who picked up the victory in the 200 yard backstroke, with a winning time of 1:52.51, while Huber and Thomas rounded out the top three for the Mountain Hawks.

The win for the Mountain Hawks is their fourth straight on the season, starting year out 4-1, the team’s best start since the team started the 2011-12 season off 7-0.

Next up for Lehigh is the U.S. Winter National Championships in Greensboro, N.C. with Walker Wilson competing in the 50 freestyle event. The team will commence again on Dec. 5 at Emmaus High School against La Salle.

EASTON, Pa. – The Lafayette swimming and diving team were back in action Friday night as they hosted rival Lehigh in Easton for a dual meet. Lehigh got the better of Lafayette for both the men and women, but two school records were broken by the Leopards in the process.

Head coach Jim Dailey was pleased with the results from the meet, saying, “It was an amazing meet. There were so many best times and performances. I’m proud of our student-athletes for racing with everything they had.”

On the men’s side, Justin Lloyd broke the Lafayette 1000-yard freestyle school record, finishing second in the event with a time of 9:34.33. The record breaking performance was almost eight seconds faster than the previous record of 9:42.05, set by Stephen McCormick back in 2010.

On the women’s side, the Leopards were lead by Lauren Lapsley and Tara Leininger, who both broke the 100-yard IM school record, with both finishing in a record timing of 1:02.71. The record breaking times from these two was .25 seconds faster than previous record holder, Alexa Overeem, who set the record back in 2015.

“Our top five times and our all-time top ten times really took a beating today, said Dailey. There were several new additions from this meet.”

With some solid performances behind them now, Dailey believes that both the men and women know exactly what they have to do to be on the Patriot League Championship teams now.

Up next for the Leopards is the ECAC Winter Championships in Nassau, N.Y., starting on Friday, November 30th, and concluding on Sunday, December 2nd.