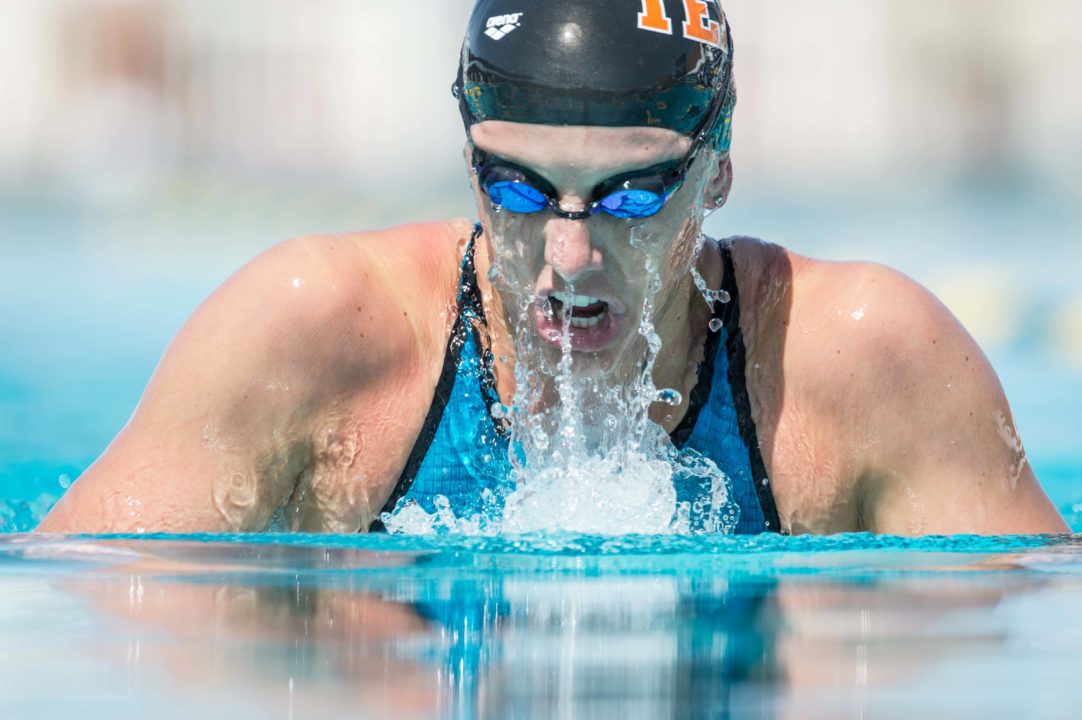 After swimming her slowest time in almost three years in prelims, Laura Sogar has scratched finals with what seems to be an allergic reaction. Current photo via Mike Lewis/Ola Vista Photography

The heat sheets are out for the day 1 finals at the 2014 Mesa Grand Prix, and the only real notable result is that Laura Sogar has scratched the A-Final of the women’s 200 breaststroke.

Sogar swam through the prelims as the 8th seed with a 2:34.46 (which was 2nd in her heat), but according to her Twitter account, she’s been “having a crazy allergic reaction to something that’s got (her) feeling some type of way.”

That explanation makes some sense, as her time in prelims was her slowest, in prelims or finals, since 2011.

This is Sogar’s best event, and she’s a former NCAA Champion in the yards version. It’s also her best shot at breaking through onto the Pan Pacs team this summer. With three spots available for tickets to the Gold Coast, Australia, Sogar, along with Breeja Larson and Micah Lawrence, are the three big favorites to score at Nationals this summer.

Other than 100 Fly, most intriguing is Hoffer v. Andrew side-by-side in both 100’s. They should award the winner a learner’s permit!

On paper, based on yards times, Mr Hoffer is much faster but it looks like he still struggles in long course.
Seriously, when you swim 43.13 in yards, if you swim as well in long course, you must swim around 49.50. Caeleb Dressel was in 42.85 last year and swam 48.97.
Hopefully Ryan Hoffer will follow in his footsteps.
The difference is that Caeleb had proved he could swim fast in long course in 2011 and 2012.
Ryan still has everything to prove in the big pool.
It’s one of the most interesting stories to watch in USA swimming this year.

Oh no! What happens with the 200 breast in Mesa?
Kevin Cordes, BJ Johnson, Laura Sogar.
The races are decimated.
But the women’s final still looks much more sexy than the men’s race.