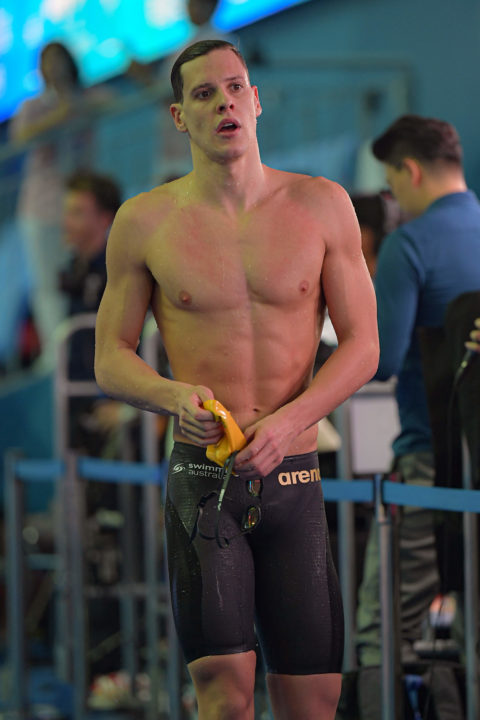 Mitch Larkin cranked out a time of 1:57.26 in the 200m IM to come within .20 of the World Cup Record he produced last week in Tokyo. Archive photo via Gian Mattia D'Alberto - LaPresse

The World Cup Records continued to roll on day 2 of this 2nd stop of the 1st FINA World Cup Series cluster for 2019. This 3-day, LCM stop is taking place in Jinan, China, a new city for the circuit, with swimmers descending upon the Olympic Sport Centre from America, Europea, Australia and beyond.

Russian Vlad Morozov fired off a time of 24.43 to take the men’s 50m backstroke in a mark that ties his own World Cup Record. Morozov originally hit the time last year at the World Cup stop in Kazan, but tonight he matched it to beat out runner-up Michael Andrew of the U.S. and Xu Jiayu of China.

But Morozov wasn’t done, as the 27-year-old nailed his first sub-48 second 100m freestyle in over a year to take the meet title in a new World Cup Record mark. Morozov fired off a time of 47.99, composed of splits of 22.85/25.14, to carry on his gold medal form from last week.

In fact, the top 3 finishers from last week carried through to this week, with Blake Pieroni of the U.S. taking silver in 48.15 and Hungarian Sebastian Sabo collected bronze 48.63. For Pieroni, his time behind Morozov represents the 5th fastest of his career, with his personal best resting at the 47.87 he produced in semi-finals at Worlds this year.

Aussie Mitch Larkin came close to cracking his own World Cup Record in the men’s 200m IM, hitting the wall tonight in a time of 1:57.26. That sits just .20 outside the 1:57.06 he put up in Tokyo last week at the 1st stop of the series, with both outings checking in faster than the 1:57.32 he produced for 7th place in the final at this year’s World Championships.

China’s crowd cheered loudly for runner-up behind Larkin, Qin Hiayang, as the 20-year-old also finished in the 1:57-zone with a silver medal-worthy 1:57.34. That time overtakes Qin’s previous season-best of 1:57.50 he produced at the Chinese National Championships last October.

Hungary’s Iron Lady Katinka Hosszu powered her way to 2 individual wins on the night, first cranking out a 400m IM time of 4:36.99 to smoke the field in the only mark under 4:45. Hosszu owns the World Record in this event with the 4:26.36 clocked at the Olympic Games when she won gold, but has been as fast as 4:32.20 already on this FINA World Cup circuit last week. That time in Tokyo checked in as the new World Cup Record.

Fellow Hungarian Zsuzsanna Jakabos got on the board with silver tonight in the 4IM in 4:45.28, while Liu Xin of China, was also in the mix with 4:49.72 for bronze. American Erica Sullivan finished off the podium in 4th, but her time tonight of 4:51.26 represents the 2nd fastest of her young career, sitting only behind her 4:48.97 from 2017’s Junior Nationals.

Hosszu got it done in the women’s 100m backstroke event as well, beating out Aussie Emily Seebohm in the process. Hosszu touched in 59.65, while Seebohm hit the wall in 59.76, both reaping the only sub-minute efforts of the field.

The pair are enjoying a game of cat and mouse in this women’s 1back event, with Seebohm having gotten the upper hand in Tokyo with a time of 59.44, while Hosszu settled for silver at that 1st stop in the exact same time as tonight.

Cate Campbell was another Aussie making some noise tonight, producing a winning 50m fly time of 25.63. That scorched her 4th place finish last week, which stood at 26.06, and also falls within striking distance of her own national record (25.47).

30-year-old Holly Barratt was next to the wall in 25.66, just a fingernail behind C1, while Danish Olympian Jeanette Ottesen was faster than last week in 25.86 for bronze.

Grant Irvine, also from down under, nearly hit a lifetime best to win the men’s 200m fly, taking the gold in a time of 1:55.94. That outing represents just the 5th time the Olympian has been under the 1:56 threshold in the event. His teammate Nic Brown took silver in 1:57.32 this evening.