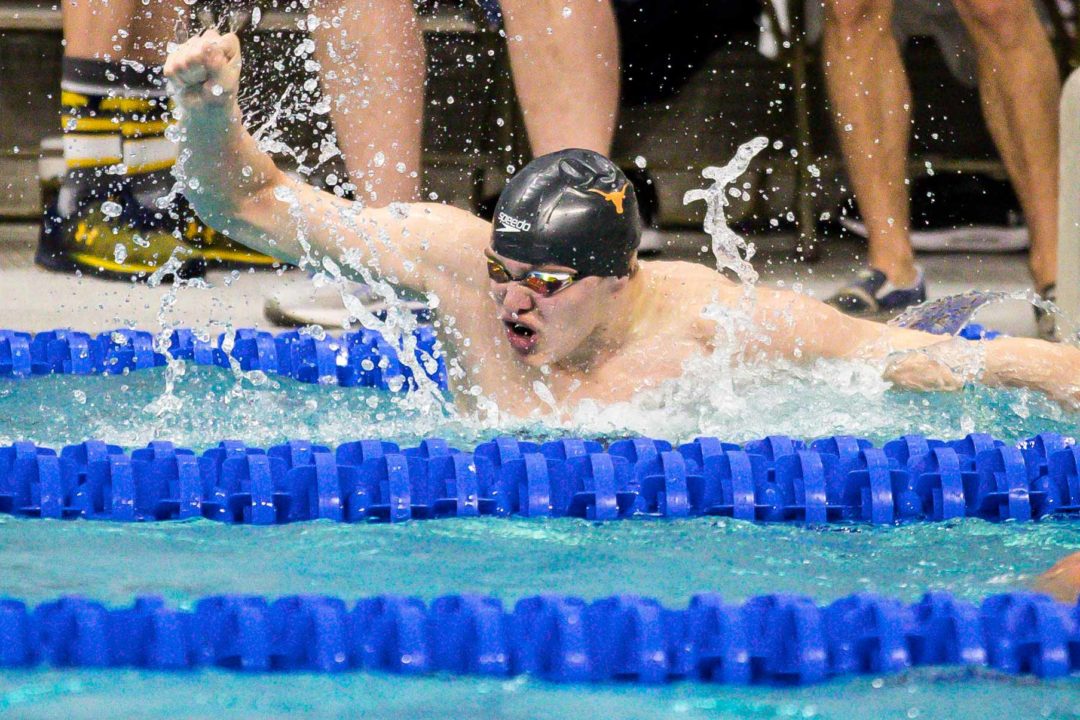 We’ve gotten used to seeing some outrageously fast times at the Texas mens’ annual intrasquad meet over the past few years, and Friday’s traditional Orange-White proved to be no exception, as some big names came close to lifetime bests.

Keep in mind that these times aren’t official, and we don’t whether or not everyone was suited up, and the Longhorns probably aren’t yet in the middle of heavy training, so take this for whatever it’s worth, but it’s still exciting to see some super quick times in September.

The most eye-popping times belonged to sophomore Daniel Krueger, the top 100 free returner from last year’s NCAAs. Texas has a deep sprint group, but Krueger came out on top in both the 50 free and the 100 free, putting up times of 19.32 and 41.99 (not to mention a 18.9 relay split) that are usually unheard-of this early in the season.

Last year, no one matched those times until the fall invites, and even then, that 41.99 would’ve ranked as the 3rd-fastest time in the country heading into January.

Krueger led a Texas sophomore sweep of the freestyles. Drew Kibler, also representing the White squad, took the 200 free in 1:33.97 and the 500 free in 4:20.84. Given the explosion in the 200 free over the past four years, that 1:33 isn’t quite as impressive as it used to be, but like Krueger’s time, it would’ve been by far the quickest time in the country last season until the big invites.

Alex Zettle, repping Orange, actually started the meet by ripping a 8:58.07 in the 1000. That’s an event that’s not swum tapered as much, but it’s still worth noting that it would’ve been the 10th-fastest time all last season. He also nearly topped Kibler in the 500 free, finishing just behind in 4:21.19.

The final sophomore to win an event was Charlie Scheinfeld (Orange), who took the 100 breast in 52.86.

While former Florida swimmer Maxime Rooney was the biggest name in the trio of transfers Texas got this season, he didn’t come out on top in any races, but Alvin Jiang (Orange) did. Jiang, coming from UNC, popped a lifetime best of 46.05 in the 100 fly to take the win.

The Longhorns talented backstroke crew was also on display. Senior Ryan Harty (Orange) was less than half a second off his lifetime best in the 100 back, winning with a 45.49. Junior Austin Katz (White) won the 200 back, an event in which he was the 2018 NCAA champion and 2019 runner-up, in 1:41.68.

Unsurprisingly, junior Jordan Windle (Orange) swept both the 1m and 3m diving events. Windle’s led the diving corps the past two years, making all 3 A-finals at last year’s NCAAs, and the Longhorns will be counting on diving to come up big in 2020 if Texas has any hope of toppling Cal.

As a wise man emblazoned with the number 11 across his chest once said:

So what we all want to know: if the Texas guys are this fast now, how fast is Dean Farris?

he did a couple quick time trials between sessions i hear…

I swam a 41 in practice yesterday.
No seriously, I swam for 41 seconds. Did 50 yards, wasn’t feeling it, hit the weight room.

Now they will get crushed in “rocktober” and post slow times the rest of the fall, and we’ll see the annual “what’s wrong with TX?” questions. They will be there in March.

A :41 100 free is legit no matter when it’s swum — even if it’s at NCAAs. Wow. Harty 45.4 was next most impressive swim (to me). Lots of other incredible swims. And Jiang going a literal lifetime best in September?! I’d say that move has been good for him already.

I was expecting some crazy times from this….but 41.99 at this stage is nuts

carol didn’t release results of women’s relay last year. She keeping it close to vest again for some reason?

The reason is she is smart. Why give opponents information unless one he’s to.

Guess that makes Eddie Reese an idiot who doesn’t know what he is doing?

Hard to tell much from times this early, but on a relative basis, “new to team” guys scored a lot of points.