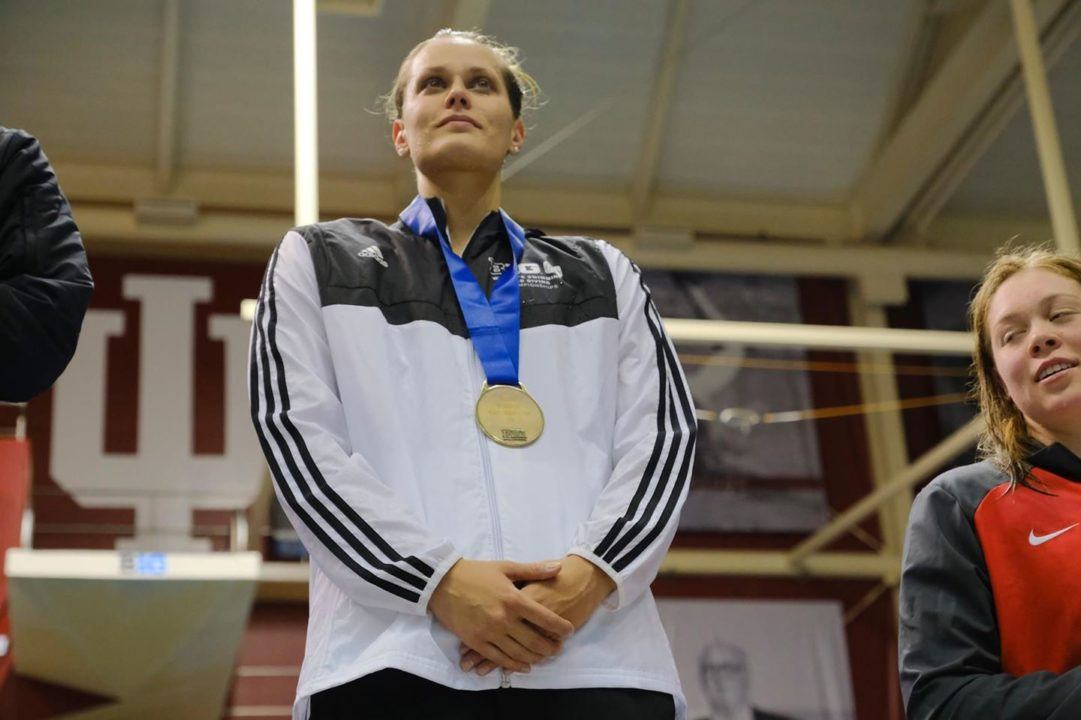 Senior Vera Koprivova made history on Friday at the Big Ten Championships, earning Rutgers’ first ever swimming medal at the conference meet by claiming bronze in the 100-yard backstroke in a school record 51.83 seconds. Current photo via Rutgers Athletics, AJ Mast

BLOOMINGTON, Ind. (Feb. 22, 2019) – Senior Vera Koprivova made history on Friday at the Big Ten Championships, earning Rutgers’ first ever swimming medal at the conference meet by claiming bronze in the 100-yard backstroke in a school record 51.83 seconds.

The historic effort culminated the fastest day in Koprivova’s career. She broke the five-year old 100 Back record during the preliminary heat in 52.23 seconds on Friday morning, while also qualifying for the consolation final in the grueling 400-yard individual medley just an hour prior. She placed 14th in the Big Ten in the 400 IM before bringing home the Big Ten hardware.

“I am very, very happy,” Koprivova said. “I am happy because, finally, Rutgers is able to celebrate being in the Top 3 of a swimming event. I worked my butt off for this. I’m also happy because it wasn’t a plan to prioritize the 100 and try to medal, so I’m excited to see what I can do in the 200 tomorrow. It’s a testament that what we worked on all year worked out so well.”

The third place finish earned 27 team points for Rutgers, who bounced back and vaulted into 11th place with 259 championship points, just a single point behind Nebraska. The Scarlet Knights scored big points with four women in championship finals on Friday, and the 200-yard freestyle relay team placing ninth.

“It was a special night,” said head coach Jon Maccoll. “It was Rutgers’ best swimming night at the conference meet since we joined the Big Ten. We’re swimming at a world class level, and this is just the beginning. We’re using this as a stepping stone for the NCAA Championships, joining national teams and entering world competitions. Tonight was a surprise to everyone except us. This was the plan.”

Inseparable as teammates and Italian countrymates, senior Francesca Stoppa and junior Federica Greco were just three-hundredths of a second apart in the championship final of the 100-yard butterfly as Stoppa placed sixth overall in 52.64, and Greco in seventh in 52.67. Earlier in the prelims, both swimmers broke Stoppa’s old school record in the event, but it will be Stoppa who carries the record onward at 52.34 seconds, again just a nearly-immeasurable three-hundredths of a second ahead of Greco.

Senior Rachel Byrne scored significant diving points for Rutgers by qualifying for the championship final off the 3-meter boards. Her career-high score of 316.30 in the preliminary session earned a trip to the finals, where she finished in eighth with 300.70 in the evening.

A pair of freshman scored their first Big Ten Championship points on Friday. Terka Grusova swam a lifetime best 52.02 to win the 100-yard backstroke consolation final and take ninth place overall in a time that would have placed fourth in the championship final behind Koprivova.

Katie Dougherty crushed her lifetime low in the 400 IM prelims, dropping to 4:19.59 from 4:22.03 to qualify for the bonus final on Friday night. She finished 24th in the Big Ten and grabbed a point for the Scarlet Knights.

The 200 Free Relay team of Stoppa, Grusova, junior Clare Lawlor and Greco finished ninth for 40 championship points in 1:31.95, just 0.34 seconds short of the school record set back in 2006.

RU was nation leading with George Kojac over 80 years ago. About time for this new dawn.