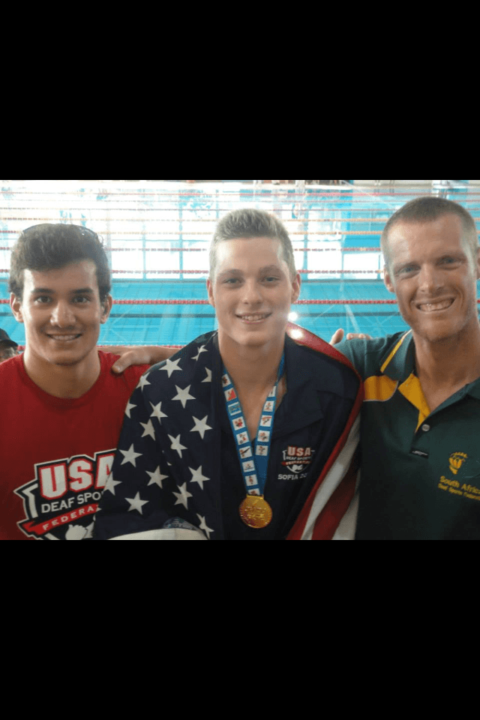 The 2013 DeafLympics took to their final day on Friday in Sofia, Bulgaria, but not before American Matthew Klotz threw up one more dagger.

Klotz is going to be a high school senior this year, and trains with the Sierra Marlins in California. Though trying to work with a deaf athlete could be intimidating to a college coach, Klotz is actually a special case: he doesn’t know much in the way of sign language, but is fully lingual, which means his speech is indiscernible from a hearing person and he reads lips. Those are keys to his in-water training, though he can hear quite normally out of the pool with his equipment on and active.

Other winners on the last day of this meet include Belarusian Aksana Petrushenka in 27.09 in the 50 free, followed by Ukrainian 43-year old veteran Ganna Lytvynenko. Lytvynenko set the Deaf World Record in this event in 2010, and was contrasted by the likes of Russian Eleonora Brykanova, who took bronze at only 15 years old.

That was one of three gold medals for Petrushenka on the meet’s last day, bumping her total to 6 titles. She also won the women’s 200 IM in 2:25.79 and the women’s 200 breaststroke in 2:36.33. The latter of those races is a new DeafLympics Record.

The men’s 100 free title went to Russia’s Vitaly Obotin in 52.56. He ended this meet with an astonishing 9 medals (7 gold) over two days.

Ultimately, the Russians dominated this event with 39 medals, including 16 golds, over 6 days. Belarus was 2nd with 13 medals (7 gold), and China also took 7 golds as part of 14 overall.

The Americans finished 5th in the medal standings with 6, including Klotz’s two golds.

Congratulations to these gifted and hard-working athletes. It’s nice to read of their big accomplishments. Keep up the hard work.