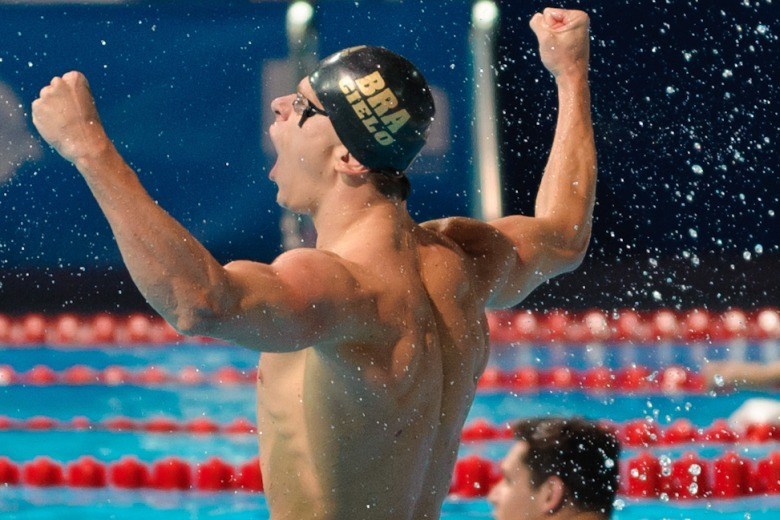 The men’s 50 freestyle final was one of the most anticipated races of the evening at it featured the three of the last four Olympic Champions in the event.

Coming out on top was 2008 Olympic champion and world record holder Cesar Cielo of Brazil. Cielo who has had to contend with injuries since the 2012 Olympic games in London was in top form posting a time of 21.32, which is the fastest time he has recorded since breaking the world record in December of 2009.

For Cielo this result was surprising because he had lost a lot of confidence in his start and questioned whether he would ever swim with the best on the international level without as much power off of the blocks. For that reason much of his concentration in training this year has been on the second 25 meters of his race, which definitely paid off.

After a marvelous first 50 split of 21.94, in the 100 freestyle final in Barcelona Morozov faded to fifth. Showing that speed earlier in the meet it was a given that he would be challenging for the top spot on the podium.

Morozov finished second in a time of 21.47, improving on his previous lifetime best of 21.64.

Four time Olympian George Bovell of Trinidad and Tobago finished third in a time of 21.51. It is incredible to see him this primed for the event since coming into the World Championships Bovell had not swum the event this season. His finishing time is also his best since January 1, 2010.

100 freestyle Olympic Champion American Nathan Adrian finished fourth in a time of 21.60. Adrian did not look good in the 100 freestyle where he finished third and his finishing time in the 50 was off his season’s best of 21.47.

happy for him, go cesar