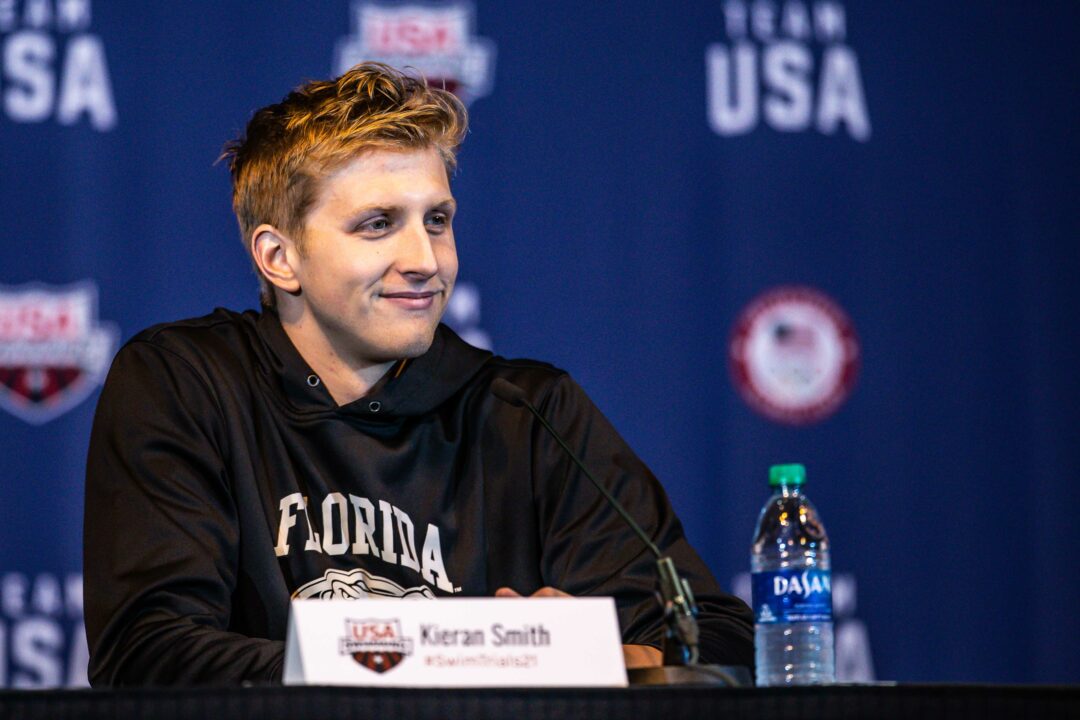 American swimmer Kieran Smith is using a unique new relay start at the Short Course World Championships this week in Dubai, starting with two feet behind the starting wedge before jumping over and diving in.

The move was noticed by Arizona State assistant coach Herbie Behm, who posted a clip of the technique on Twitter.

Kieran Smith starts with both feet behind the wedge on relays pic.twitter.com/RG4YRNczG3

Smith, who trains collegiately at the University of Florida, raced on Sunday as a member of the American men’s 200 free relay. With Michael Andrew heading home early, the Americans had to force some pieces onto this relay, and that included Smith, who anchored the team in 21.30. In prelims (where the above video was shot), he split 21.20 on the team’s 3rd leg.

In finals, he left the block in 2nd place but was run down by Italian anchor Alessandro Miressi (20.61) and Dutch anchor Thom de Boer (20.41).

A version of this start, where a swimmer starts with one foot on the starting wedge and one foot behind it, known as a step-over start, was first popularized by the Texas Longhorns in NCAA swimming. That has now become the standard for many top collegiate teams in the United States.

Smith’s version, with both feet starting behind the wedge, is probably an evolution of the “hop jump” start that was being used by some swimmers before the wedge, where a swimmer starts at the back of the block and hops toward the front – in theory to create more potential energy toward the water.

The most obvious pitfall here is the potential to clip a foot on the wedge, which would be disastrous – both for the result and with the potential for injury. Shy of that, the precision needed to still land the front foot at the front of the block is very high. And even then, the timing becomes very complicated – especially on international relays, where an athlete might be less familiar with the swimmer coming into the wall.

It also adds complexity without an obvious benefit. As UNCW head coach Bobby Guntoro said in reply to Behm’s Tweet – “While it is intriguing…but a simple movement has the ability to generate more power.”

Guntoro says he would not recommend that start, even acknowledging that Smith “executed (it) perfectly.”

Guntoro was an assistant coach leading the sprint group at NC State when they swam some of the fastest yards legs in NCAA history.

Smith was the leadoff leg of his only relay swim in Tokyo in the finals of the 800 free relay. Race video from the 2021 NCAA Championships, where Smith swam the 3rd leg of Florida’s 200 free relay among other swims, shows him doing a more traditional one foot step-over start. That indicates a relatively new technique for Smith, who is versatile enough to swim sprint relays even as the Olympic bronze medalist in the individual 400 free.

There is probably more research that needs to be done to determine if this start is, in fact, faster, but even then, the conversation will still circle back to a challenging risk-reward proposition.

I also thought if both feet leave the block at the same time it could be considered a false start. It’ll be interesting to see how this evolves.
I saw the false start called on a kid jumping and cheering in a relay leg, so the language may need some tweaking for this to work.

I believe at at one time a relay swimmer, other than first leg, could run up to the start; so there is some precedent. Our Y coach told us, but that was back in the 1960s…and the rule was changed by then

I remember people doing this before the wedge and I thought it was risking over stepping. This type of start is the equivalent of Tom Jagger’s superman start.

The stupidest version of this was a team at a high school district meet that would start from the back of the block. Jump to the edge and drive off as if they were trying to spring board. Their coach was watching with a big smile as if he came up with something brilliant. (In hindsight I don’t know how this was legal since the feet leave the block).

But they contact the block again when they do the two-footed push, right?

I remember messing with that kind of start in high school too, just never seemed worth it from a risk-reward standpoint. Two steps was like 90% as good and significantly less likely to cause you to just jump off the block on the first hop.

Yeah you jump from the back to the edge and drive off the edge.

Basically some boys showing off.

This should be outlawed as dangerous. Some poor girl or boy will trip and get severely injured – this is irresponsible.

You didn’t have to step over a 5 inch wedge.

Wedges have been FINA approved since late 2008. There were some high-level meets in early 2009 that used wedged blocks, but for some reason, they weren’t used for Rome 2009.

That’s too much coordination for me

I love watching age groupers and high schoolers do the step over the wedge start. Conservative estimate is 90% failure rate at actually placing the front foot correctly.