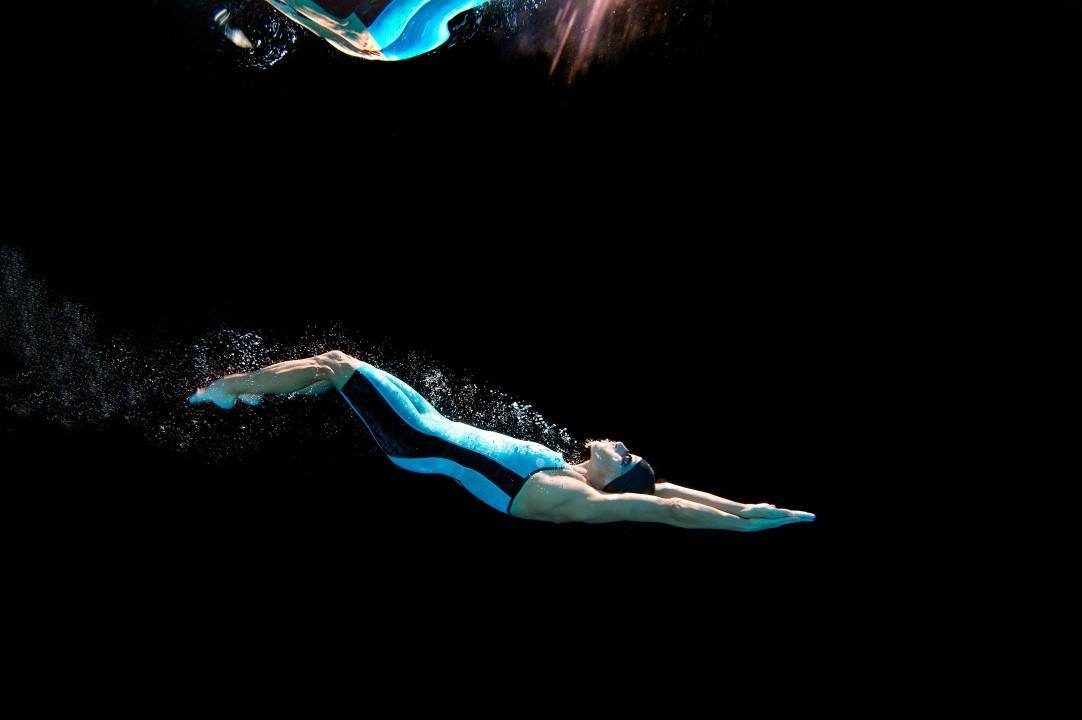 How well do you understand Dolphin Kick? This may be the most important quiz of your swimming career. Correct answers are at the end. Current photo via Mike Lewis/Ola Vista Photography

Dolphin kick is now called the Fifth Stroke because it is such an important technique in all swimming races. It is a complex subject and not well understood by many. Test your knowledge about dolphin kick by taking this pop quiz. Let’s see how much you understand about the dolphin kick technique.

1- During one kicking cycle, how many potential acceleration points (places that generate propulsion) are there?

2 – On one kicking cycle, how many major deceleration points (places where drag forces are much greater than propulsion) are there?

3- In dolphin kick, the feet must move backward in the water in order to generate propulsion.

4 – On the down kick (while kicking on the stomach) the feet should be pointed straight backward.

5 – In dolphin down kick (while on stomach), nearly all of the propulsive force occurs at

6- While dolphin kicking on the stomach, the greatest velocity can be achieved

7 – While dolphin kicking on the back, the peak velocity (highest velocity) is nearly always achieved

11 -On a breaststroke pullout after the start, the legal number of dolphin down kicks that can be taken is

13 – Before the up kick, the ideal flexion of the hip seems to be around

14 – The recovery period on the dolphin kick should occur

16 – While dolphin kicking under water, the hands and arms held tightly in a streamline position above the head should not move.

17 – Kicking dolphin underwater on the back is generally faster than dolphin kicking on the stomach.

18 – How many dolphin kicks are usually taken in a single butterfly stroke cycle?

1 – D. 4. (link – https://theraceclub.com/sc-videos/classroom-dolphin-kick/) Nearly all of the propulsion of the kick is generated by the feet. The feet use the vortices caused by the body moving forward through the water and the feet moving upward and downward to generate propulsion. While four potential points during the kicking cycle (two from the foot vortex and two from the body vortex), seldom do we see all four being used. More commonly, we see one, two or three points of acceleration actually happen.

2 – B. 2. The majority of the deceleration in dolphin kick is caused by the amount of knee bend (flexion) before the down kick and the amount of hip flexion and the duration and amount of the feet hanging prior to the up kick.

3 – B. False. While the hands must move backwards in the water to generate propulsion, the feet are moving through water that is flowing or moving. Consequently, the feet can generate propulsion without moving backward relative to a fixed point in the pool. The direction of motion of the feet in dolphin kick is nearly straight up, then forward, then nearly straight down, then forward again. There is almost no backward motion of the feet during the dolphin kick.

4 – B. False. (link – https://theraceclub.com/sc-videos/introduction-to-dolphin-kick/)
During the down kick, more propulsion can be generated by having the tops of the feet traverse the body vortex perpendicular to the slipstream, rather than parallel with the stream. To increase propulsion on the way down, the feet should turn inward, so called pigeon-toed plantar flexion.

5 – D. Feet. Don’t confuse the muscles responsible for moving the hands and feet through the water with the location of the propulsive force itself. Remove the hands and feet from a swimmer and he or she will barely be able to make it down the pool.

6 — D. All of the above. (link – https://theraceclub.com/sc-videos/dolphin-kick-marcus-schlesinger/)
Depending on where the swimmer puts forth the greatest effort, the peak acceleration and velocity can occur at the beginning of the down kick, through the body’s vortex on the way down, or during the up kick.

7  – A. During the down kick. Because of the large foot vortex caused by the strong up kick and assistance of gravity, the down kick of a swimmer on his back becomes very powerful. Typically, we see the swimmer’s maximum speed reached during the down kick, not the up kick.

8 – C. Immediately. Unless you are a Masters swimmer, when perhaps no dolphin kicks should be used, the best time to initiate the first kick is right when the toes leave the wall. The longer you glide, the slower your time will be to 5 meters.

9 – B. Up kick. As the swimmer pushes off the wall, in order to maximize speed, the legs need to be straight and toes pointed. A down kick cannot be initiated until the knees are bent. Therefore, the first motion is always an up kick (albeit weak).

11 – C. 2. This is a trick question. Most swimmers and coaches do not recognize that the first dolphin kick on any start occurs when the feet first enter the water. With the angle of the body at entry the feet will generate propulsion as they move downward and forward. The swimmer is allowed to take one more down kick which is recommended while the arms are still in the streamline position, rather than simultaneously with the pulldown.

12 – B. 60-70 degrees. To get meaningful propulsion on the down kick, the knees must bend. If they don’t bend enough, not enough propulsion is generated. If they bend too much, the swimmer will slow down too much before the next down kick. The ideal amount of knee bend depends on having good ankle plantar flexibility and seems to be in the range of 60-70 degrees.

13 – C. 20-30 degrees. In order to get any meaningful propulsion during the up kick, swimmers need to flex their hips. Over flexing the hips will increase frontal drag and take too long. The ideal amount of hip flexion seems to be in the range of 20-30 degrees. However, to maximize the propulsion from the up kick, the swimmer must also point the toes backward and work hard on the upward motion.

14 – D. Never. The fastest dolphin kickers work their legs and feet in both directions, up and down. If they delay too long in initiating either the down or up kicks, they lose the opportunity to use the foot vortex for more acceleration. There is no vacation time in fast dolphin kicking.

15 – A. True. Being on the surface of the water, whether kicking or swimming, adds another component to frontal drag, called surface or wave drag. By kicking under water and eliminating surface drag, dolphin kicking beneath the surface is faster than on the surface.

16 – B. False. During the dolphin kick the entire body, upper and lower, must move in order to maximize propulsion. If the arms and hands are held motionless in front of the swimmer, the hips are not being flexed. The ideal amount of movement of the hands back and forth seems to be around 6-8 inches.

17 – A. True. While kicking on the back, the down kick, which is the weaker motion, becomes much stronger when compared to the same motion on the swimmer’s stomach. This results in a more uniform and higher velocity for the dolphin kicker on his back.

18 – D. 4. The up kicks in butterfly are often neglected. Yet they can be powerful if utilized. While it is desirable to use two strong down kicks in fly, don’t forget about the up kicks. They count.

19 – B. Not pointing the feet soon enough. Of all the technical errors made in swimming, allowing the feet to hang is one of the worst mistakes. It adds 41% more frontal drag compare to pointing the toes. One time we often see this mistake being made is at the end of the dolphin kick. Pointing the toes not only reduces frontal drag, it will also help increase propulsion from the up kick.

Youre killing me Smalls…Answer to #15 is A…

Yes, remember the video of Ryan Lochte in 2012 kicking a 50 SCY with a turn in 20.8s? Definitely faster than with a board. https://www.youtube.com/watch?v=xZSUQwfg6ZU

Funny enough I was using one of Gary’s videos to show our kids how to do a crossover turn. Lo and behold Gary has given me something else to work on with our kids!

Thanks for another great article Gary.

You are welcome! Hope you will subscribe to our video channels.