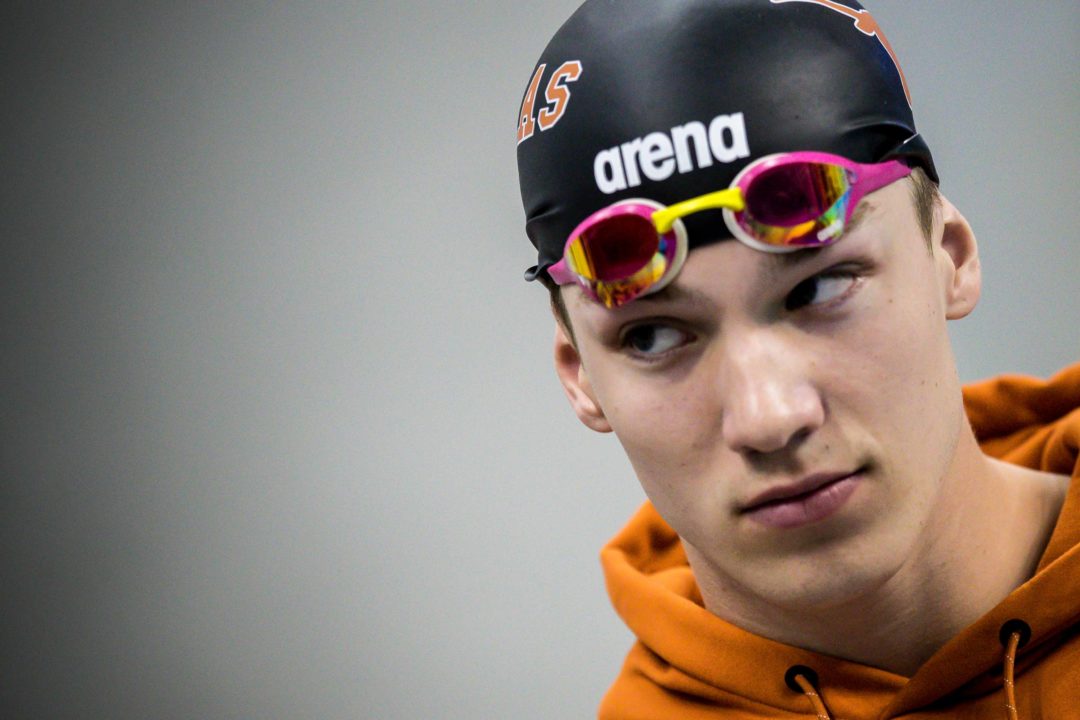 The first night of the Texas Hall of Fame Swimming Invite kicked off in Austin with several relays in Austin. Texas saw multiple relays hit NCAA “A” cuts, while SMU did not participate in the session.

Texas dominated the first relay of the night, with their relays sweeping the podium. The Texas ‘A’ relay  of Julia Cook, Anna Elendt, Olivia Bray, and Bridget Semenuk won the event in a time of 1:35.78, sliding under the NCAA A-cut in the process. Notably, Bray hit a split of 22.43 on the fly leg of the relay to post the 3rd fastest split in the field, regardless of stroke.

Texas’ ‘B’ and ‘C’ relays followed behind in second and third place to give the Longhorns a podium sweep. On the B-relay, Grace Cooper split a 21.82 to post the fastest freestyle split in the entire field.

Like the women’s event, Texas won this relay, earning an NCAA A-cut in the process. The relay of Chris Staka, Charlie Scheinfeld, Alvin Jiang, and Daniel Kruger swam to a final time of 1:23.67 to get under the NCAA A-cut of 1:24.30. Staka’s backstroke split of 21.09 was only .01 off of his lifetime best of 21.08 that he swam at the Texas vs. SMU Meet last season.

Texas’ ‘B’ relay finished second in 1:25.60, with TCU’s ‘A’ relay coming in third with a time of 1:28.31. Notably, both schools had one of their relays DQ’d in this event for a false start. Texas saw theirs come via Peter Larson on the ‘D’ relay, while TCU’s came from Kevin Chao on their ‘E’ relay.

During the break before the 800 freestyle relays began, Staka returned to the pool for a time trial of the 100 IM. Despite coming fresh off of the 200 medley relay, Staka still managed to post an impressive time of 47.23 in an event that is rarely contested at the Division 1 level. In fact, Staka’s time appears to be the second-fastest 100 IM time ever posted in a short course pool. Matt Grevers’ time of 47.06 from his race against Michael Phelps and David Nolan in 2016 still stands as the fastest swim of all time, though it is not recognized in the USA Swimming database.

Expect Pash to be added to the ‘A’ relay in the future, as her time was over 5 seconds faster than the 1:48.97 Heckman split anchoring the ‘A’ relay.

Texas saw its second podium sweep of the night, led by the relay of Drew Kibler, Coby Carrozza, Jake Sannem, and Carson Foster, who swam to an NCAA “A” cut with a final time of 6:07.34. Impressively, the time that the team put up tonight was faster than Texas’ nation-leading 6:08.40 from last season by over a second. Kibler, the only returning swimmer from last season’s relay put up a best time in the 200 freestyle leading off the relay, splitting 1:30.57 to cut about .3 off of his previous best. His time maintains his standing as the 7th-fastest performer of all-time in the event.

Anyone knows what’s going on with Grace Ariola? I hope she is not injured.

44 low actually which is absurd

Calvin Jaing, the white twin of Alvin Jiang on Texas

Surprised not to see Willenbring on the 800Fr relay. I don’t think we’ve seen him swim this season? He’s still on the roster.

Also noticed previous NCAA qualifiers Yeager, Varozza and Park are not on the roster.

I see two possibilities for this username 1. it’s actually Luke Bowman 2. It’s someone close to Luke Bowman, probably a roomate

I see one possibility for this username 1. It’s Harambe

The world may never know

Somethings are just too fast