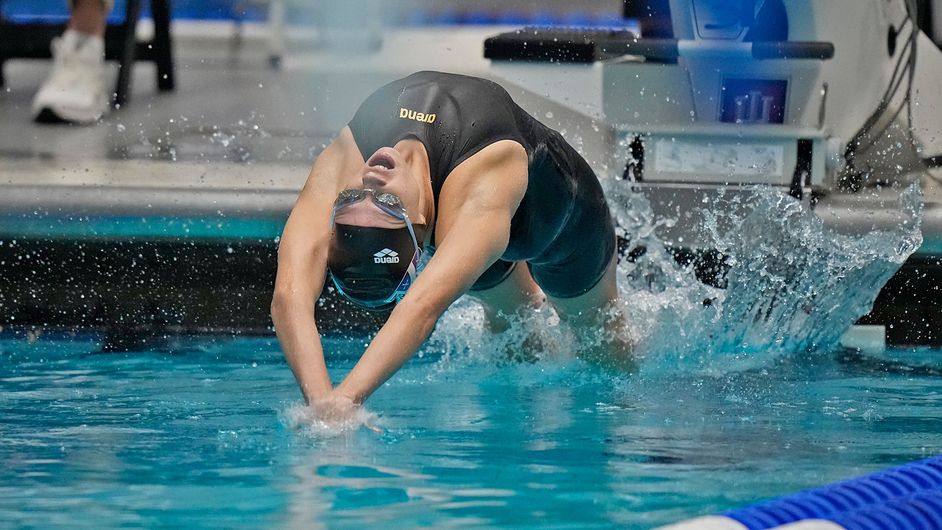 With four more event wins Saturday and an enormous total of 2,803.5 points, the Kenyon College women's team capped off a dominant performance at home. Current photo via A.J. Mast

Kenyon’s first win of the evening occurred in the second event, the 200-yard backstroke. Senior Olivia Smith was victorious in that race, as she posted a time of 1:59.87, edging Carnegie Mellon’s Savannah Xu, who previously held the top time (2:00.73) in Division III this season. Kenyon first-year Emma Kelley and junior Caleigh Wukitch joined Smith in posting ‘B’ cut times. Kelley finished fourth in the event with a time of  2:02.38, while Wukitch placed fifth in 2:02.88.

Next up for the Owls was senior Alexandra White, who sprinted to a win in the 100-yard freestyle. After posting an NCAA Division III best time of 50.18 in the morning prelims, White won the finals with a time of 50.37, which was still well below the ‘B’ cut. In the same event, Kenyon first-year Lisa Torrecillas-Jouault took third place in 50.83, also a ‘B’ cut time.

With the results of the 100-yard freestyle in the books, Kenyon’s lead over West Chester cleared 1,000 points, but the Owls weren’t done, yet. They got a one-two finish from Gabrielle Wei and Jennah Fadely in the 200-yard breaststroke. Wei checked in with a 2:13.82, a Division III best this season, while Fadely stopped the clock at 2:15.32. Both those times easily cleared the NCAA ‘B’ cut.

In the final individual event of the evening, Kenyon received a runner-up finish in the 200-yard butterfly from Ania Axas, who completed the race in 2:02.07 for another top Division III time and NCAA ‘B’ cut.

Before Saturday’s swim finals took place, Kenyon first-year Bryn Tiernan claimed a second-place finish in the three-meter diving competition, in which she posted a final score of 330.67.

The Invitational concluded with the 400-yard freestyle relay and another event win for Kenyon. The triumphant quartet, which clocked in at 3:22.94, included Smith, Torrecillas-Jouault, Ella Campbell and White. Again, that was another ‘B’ cut and another top Division III time for the Owls.