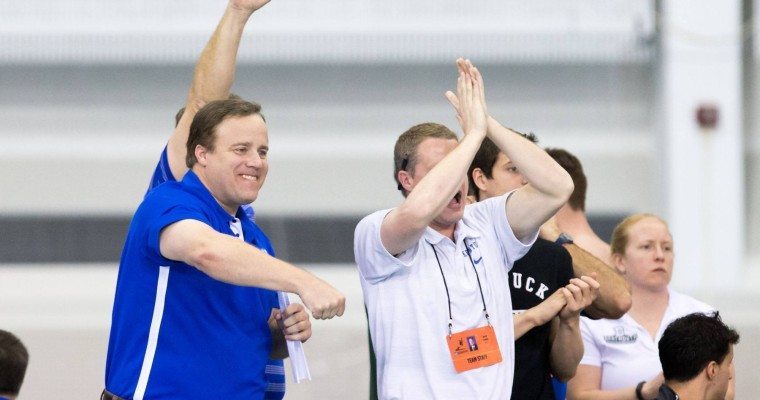 The Kentucky Wildcats had a 3.72 GPA in the spring semester to lead all Division I women's programs. Archive photo via Tim Binning/TheSwimPictures.com

Edit: a previous version of this article stated that Minnesota got a 3.86, which was the number released by the CSCAA. An Academic adviser for Minnesota confirms that it was a 3.386.

The College Swim Coaches Association (CSCAA) has announced their 2014 Spring Scholar All-America Team Awards, recognizing the women’s programs who achieved an average GPA of 3.0 or greater (on a 4.0 scale) in the most recent semester, and it is Lars Joregnsen’s Kentucky team who leads the way.

Their impressive 3.72 GPA, confirmed by head coach Lars Jorgensen, means that of the 24 swimmers listed on Kentucky’s roster for the 2013-2014 season, if they averaged about 4.5 classes each, they got about 93 A’s and just 15 B’s. That’s an impressive ratio.

The only team to finish both semesters in the top 5 GPA’s in the country is the Alabama women, who had the leading GPA (3.60) in the fall and the 3rd-ranked GPA (3.65) in the spring. That’s noteworthy, because often times academic advisers for college athletics (both in swimming and outside of swimming) will unbalance classes between semesters to help athletes better manage their academic versus athletic loads. For example, many programs will have swimmers take their more challenging classes in the fall because there is significantly more class time missed in the spring for championship meets. Excelling academically in both semesters, therefore, shows year-round dedication to the academic cause.

As for the teams that really strutted in both the classroom and the pool, here are those teams that finished in the top 10 at the 2014 NCAA Championships and also had a team GPA above 3.0:

In all, the top 25 teams from the 2014 NCAA Championships achieved over a 3.0 GPA, as did 150 out of 198 women’s Division I programs. Swimmers are setting the academic bar high.