Kentucky Women Get Verbals From Game-Changers Winstead, Galyer For Class of 2016 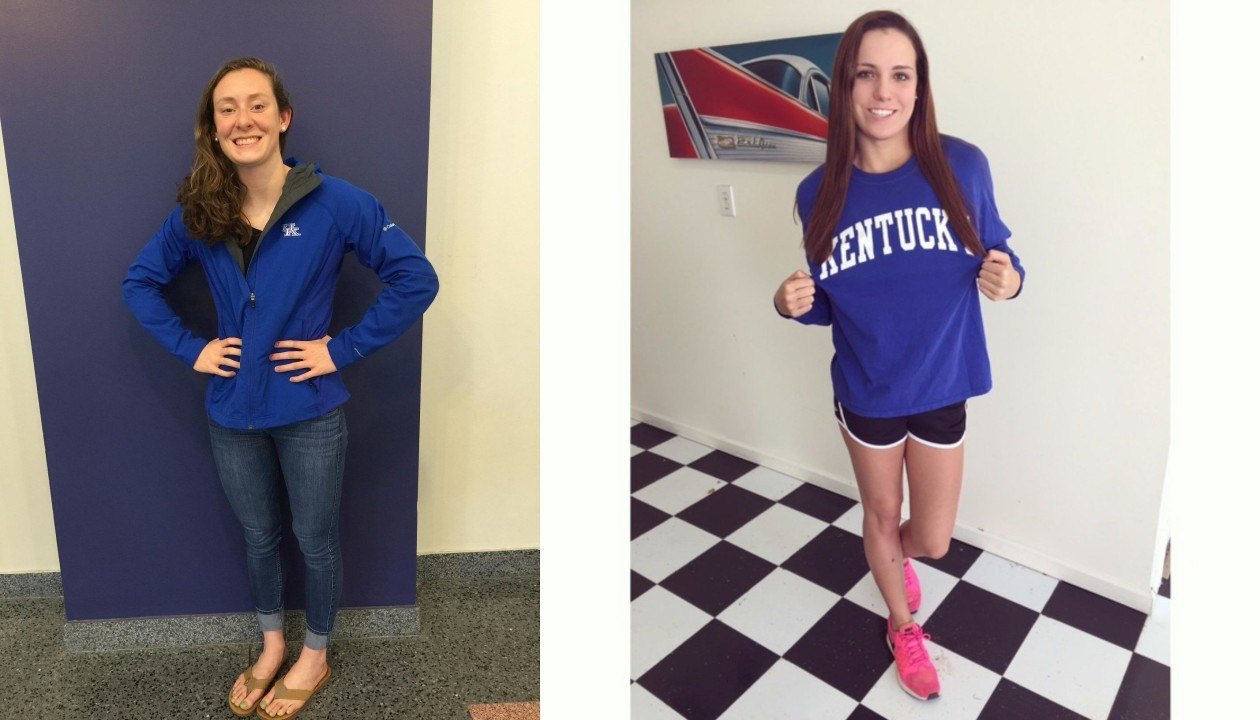 Madison Winstead (left) and Ali Galyer (right) have both verbally committed to Kentucky as part of the class of 2016.

The Kentucky women have already taken a major step toward the best recruiting class in the Lars Jorgensen era for the class of 2016, and the July 1 open contact period hasn’t even begun yet.

Ali Galyer from Y-Spartaquatics in South Carolina, and local swimmer Madison Winstead from Lexington’s own Highbridge Aquatics have both made verbal commitments to the Wildcats.

The two swimmers have very different specialties; Galyer is a top-flight backstroke and sprint freestyler, while Winstead is primarily a breastsroker (though with solid back, fly, and freestyles, she projects to be an outstanding IM’er).

What’s really interesting about the twin pickups is that neither swimmer is a butterflier, which is what this Kentucky women’s program has really become known for developing over the last three years, including National Teamer Tina Bechtel.

Both swimmers are also still on the upward slope of their careers, with each showing huge improvements as juniors.

Madison Winstead, a breaststroker/IM’er, has verbally committed to Kentucky.

Each of the 10 best times in yards listed for Winstead below not only came during her junior season, but they came during a month-long period across two meets at the Kentucky High School State Championship and LSC State Championship meets. That bodes well for her future in college, where multi-meet tapers are a must for NCAA-level swimmers.

“I have lived in Lexington my whole life and growing up going to football and basketball games and experiencing what a real SEC school feels like and I just wouldn’t want to be anywhere else,” Winstead said of her decision. “I’m also really happy to be able to stay close to home. UK also has a great pharmacy school and that is what I want to pursue a career in. Also seeing this program develop the way it has under the new coaching staff I’m really excited to join a team on the rise!”

Winstead’s versatility gives her a lot of opportunities to contribute immediately, and she says that she’d like to continue to develop that versatility during her senior year. Still, her best time in the 100 yard breaststroke is already faster than any member of the Kentucky team swam in the 2014-2015 season. Kentucky doesn’t return a single breaststroke point of the just 6 they scored at SEC’s last year, and Winstead is already good enough to place in the C-Final of the 100 and the B-Final of the 200 with a year of development left to go.

Her time progressions in the 100 and 200 breaststroke:

Winstead also played basketball through 8th grade and volleyball as a freshman and sophomore at Dunbar High School.

Galyer also has strong Lexington ties: she’s the younger sister of 2015 SEC Champion Danielle Galyer, who won the 200 backstroke as a sophomore to contribute to the Wildcats’ 10-school-record performance. The two sisters will overlap for one season in college.

Galyer’s best times in yards, all of which were also done during her junior season:

While she’s unlikely to immediately unseat her sister from Kentucky’s medley relays as a freshman, the younger Galyer should still have an immediate, profound impact on the Wildcats’ fortune in year one. Her best times would already place her in the A final of the 200 and the B-final of the 100, and will also immediately contribute to at least one (but possibly all five) Kentucky relays.

“Lars Jorgensen and the rest of the coaches have done great things over the short amount of time they’ve been at UK and I can’t wait to be apart of an amazing group of people,” Galyer said. “The team atmosphere fosters success in and out of the pool. The team has an amazing support staff of coaches and advisors that will help me reach my full potential as an athlete and a person. As head coach Lars has lead the team to amazing improvements in just a few years and I can’t wait to be a part of it.

“Kentucky swimming also has a strong focus on academics and teaches the swimmers how to reach their full potential out of the pool. Also watching the growth of my sister Danielle since she started at UK has certainly made my decision that much easier.”

Galyer was named the South Carolina AAAA Female Swimmer of the Year in both 2014 and 2015 for her efforts at JL Mann High School.