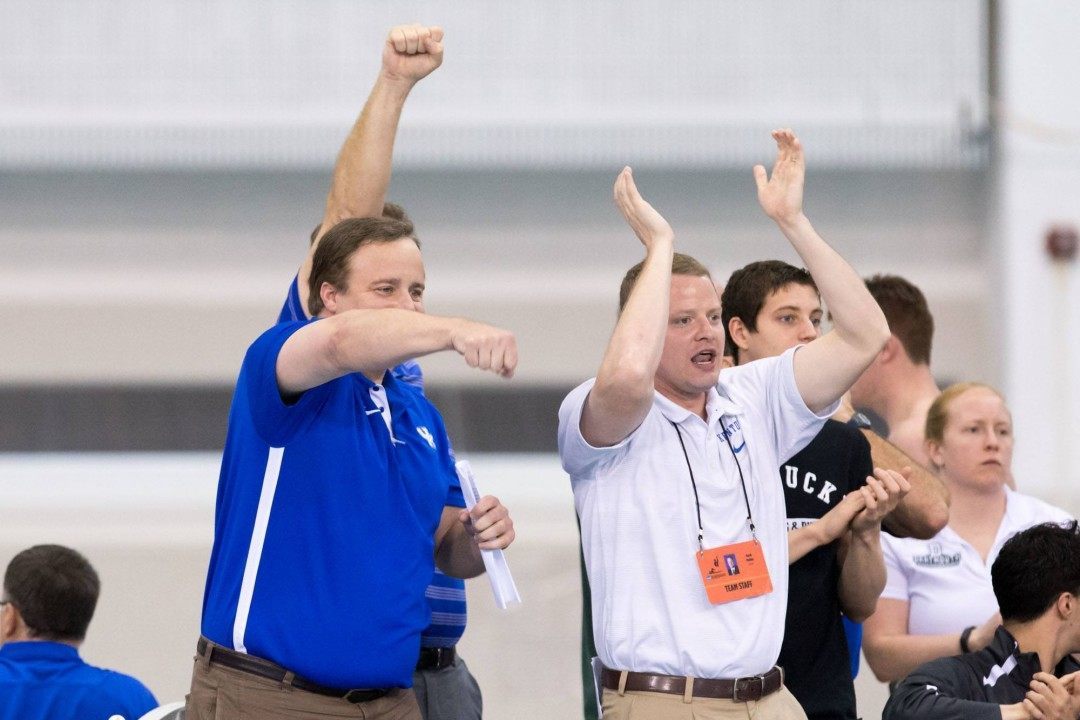 A full-team effort led the Kentucky Wildcats over the Cincinnati Bearcats on the road on Friday. Archive photo via Tim Binning/TheSwimPictures.com

The Kentucky Wildcats finished out their regular-season on Friday with a pair of match 216-84 victories over the Cincinnati Bearcats, upsetting the Bearcats’ senior day festivities at the Keating Aquatics Center.

A team effort led Kentucky to win all but 5 of the day’s 32 events, including a rare dual-meet platform diving competition as the team’s make final preparations for the post-season.

There were no real times that jump out at his meet, though Kentucky did get solid swims from their starring women’s butterfly group. Tina Bechtel won the 100 fly in 55.08, beating out Abby Myers’ 55.62, while Myers won the 200 fly in 2:00.49 (without Bechtel).

For Myers, that’s a few-tenths better than she was at a similar point last season before going on to place 12th at the NCAA Championships. In combination with 5 swimmers from last year’s A-final graduating, Myers’ being slightly ahead of schedule here puts her in position to be a first-team All-American in the event come March.

As for Bechtel, she instead swam the 200 free as her other individual event, where she put in a 1:51.50 to win. She as one of five Kentucky swimmers with two individual wins in the meet. She and Myers were both on Kentucky’s winning 400 free relay (3:29.70) as well.

Canadian sophomore Jackie Keire led the way for the Bearcat women with three individual wins of her own. She skipped the 200 medley relay and began her day halfway through the meet with a relatively-comfortable win in the women’s 50 free, beating Kentucky freshman Paige Wells 23.24-23.69.

Coming out of the diving break, Keire bounced right back to beat Kentucky’s Blaire Kuethe by exactly a second. Keire was a 51.18 as compared to Kuethe’s 52.18. Kuethe was a little fresher, having not swum the 50 free, but still had a 200 fly before this race.

Based on her mid-season times, Keire will have a chance at qualifying for the NCAA Championships individually at the American Athletic Conference Championships that begin in just over two weeks in Greensboro. She has a lot of tapering to do in that time, however, to get back to those numbers.

Cincinnati got an early boost, however, when freshman Chris Bready topped the 1000 free in 9:23.19. Bready led this race early over Kentucky’s Jamie Stevenson, but Stevenson fough back in the middle-third of the race to take a lead.

Stevenson held that lead until the last 100 yards, where Bready split 51.84 to his opponent’s 53.34 to overcome for the win. Stevenson’s second-place time was 9:23.48, which is his season-and-collegiate best in the event.

Beginning with a Scott Crosthwaite 200 free (1:39.94), Kentucky would go on a roll at that point and not lose again until the 400 free relay.

Sending the Bearcats out in style was senior Michael Kaplan, who anchored their 400 free relay. Kaplan, swimming in his first meet of the new year, split a 46.41 to touch the wall first. Cincinnati’s total relay time was 3:04.82, beating out Kentucky’s 3:06.63.

Kaplan’s teammate D.J. Waite had the fastest split of the day with a 45.74, whereas Kentucky’s top split actually came on their ‘B’ relay when Zac Zandona swam a 45.94.

That Cincy Senior Day must have been interesting.