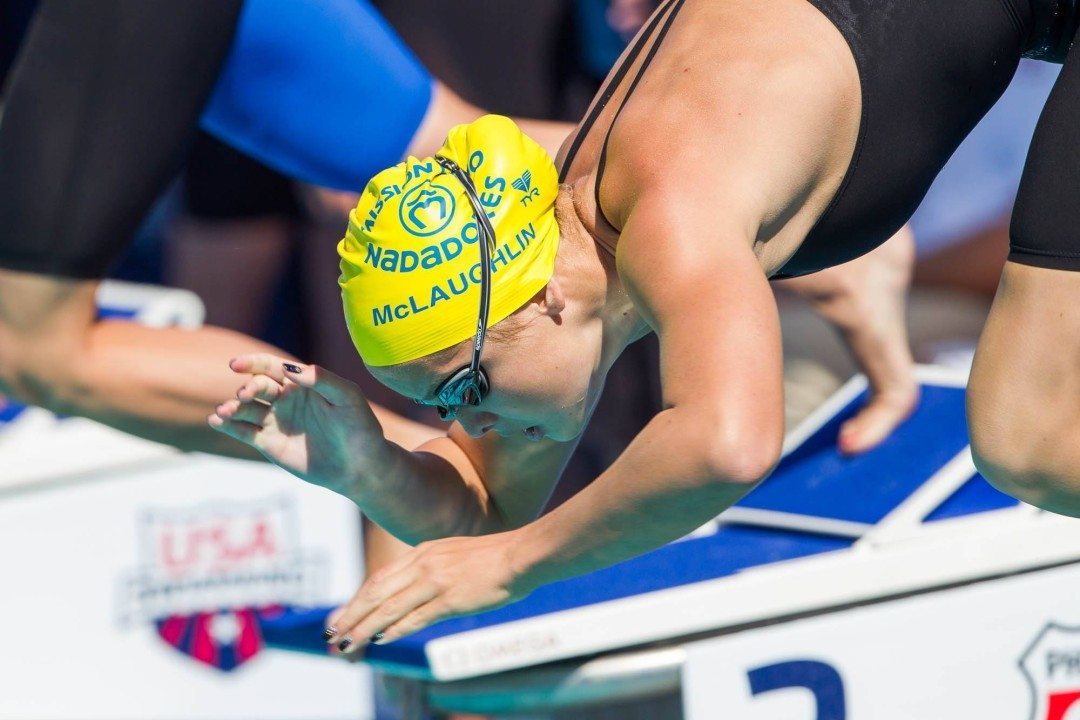 17-year-old Katie McLaughlin broke the 17-18 National Age Group record in the 100 meter fly Saturday night, taking the mark below 58 seconds for the first time ever. Archive photo via Tim Binning/TheSwimPictures.com

17-year-old Katie McLaughlin broke the 17-18 National Age Group record in the 100 meter fly Saturday night, taking the mark below 58 seconds for the first time ever.

McLaughlin was just off the record in prelims, going 58.50 – the old bar was set at 58.41 from Felicia Lee in 2010. Lee, of course, would go on to a stellar NCAA career with Stanford including several NCAA-winning and American record-breaking relays. The 17-year-old McLaughlin will swim for Stanford’s Pac-12 rival California.

Currently, though, she swims for coach Bill Rose and the Mission Viejo Nadadores of Southern California. Mission Viejo is hosting the Fran Crippen Swim Meet of Champions (also known as SMOC) this weekend, and it was there, in her home pool, that McLaughlin set the record.

McLaughlin was 57.87 to both win the event and set the record. In the process, she beat some huge names, including USC standout and U.S. National Teamer Kendyl Stewart, McLaughlin’s future Cal teammate Noemie Thomas and incoming Stanford freshman Ella Eastin.

What’s really interesting is that McLaughlin actually outpaced the old record mostly in the first 50, despite being better known as a 200 flyer who will swim only that distance at World Championships this summer.

McLaughlin beat Lee’s old split at the 50-mark by about four tenths, and was also faster by a tenth in the back half.

We’ll have a full recap of SMOC after the meet finishes on the West Coast.

Given the swims she had in all her other events it’s obvious she had more to give in that 200 fly where she only swam the heats (to defer to the 100 free which backed up with the 2fly). Quick times in season particularly for her. She could very well be swimming fly for the medley relay in Kazan. Stewart is also swimming well. This could be a stronger leg on that relay than anticipated.

Yes. You have now 3 girls who have a sub 57 potential in Rio with McLaughlin, Worrell and Stewart.
I don’t forget Vollmer but I need to see it to believe it.

Bobo, is your “sub57” referring to the individual 100 or the medley relay split ? If it’s the former, then I feel your optimism is running over just a little bit. That’s still a drop of the best part of a second or 1sec plus. We’re more likely to know more this time next year as to how or whether they or others have progressed. They may, indeed, get down to sub57 but by Rio may be another matter as most drops in 100 races at their level are likely to be incremental (ie mid 57 then 57low).

If its the relay split then that’s becoming more plausible although its probably looking 57lowish best case scenario for Kazan.

That’s another great swim for Katie McLaughlin. First time under 58 in the 100 fly. And a new NAG record!
Another best time at this meet after her 55 low in the 100 free and her 1.57 in the 200 free.
As long as she improves her 100 fly PB and gains more speed, it will help a lot her 200 fly. She has the endurance and now she adds more and more speed with age to her repertoire.
I’m more and more optimistic about her olympic medal chances next year.
And who knows? Perhaps a medal already this year at worlds?

And please go to Cal after Rio.

I thought she was already going to Cal in the Fall. Has she changed her mind?

That performance could put her on the medley relay

It appears that they 100 fly and relay spot is up for grabs. I do not think that Dana Vollmer would be training to come back if she didn’t think she had a shot. My money is on Dana. No American woman is even close to her times.

She is going to Cal. A month or so ago it was questionable that she would defer for a year due to the Olympics. But she is really swimming “lights out” right now, so I have not heard the latest on her plans or options. Maybe her coach or some of my Cal Bear cohorts could comment here. I sure hope we don’t lose TWO incoming Frosh to deferment, but we all want the best for McLaughlin and Weitzel—meaning they both make the team to Rio.. The Cal women’s squad will still be very strong in 2016, obviously, but getting top tier recruits go with the territory.