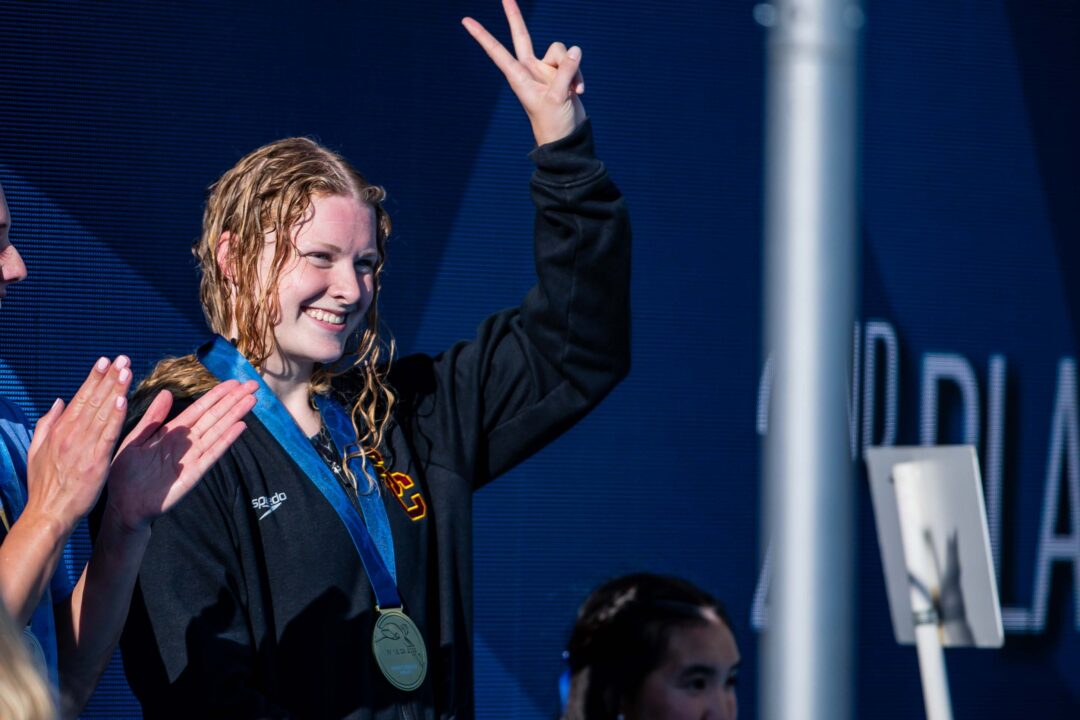 USC junior Kaitlyn Dobler, the defending NCAA Champion in the 100 breast, says she'll be at USC for two more seasons after this one. Archive photo via Jack Spitser/Spitser Photography

USC junior Kaitlyn Dobler, the top 100 breaststroke in the NCAA, has announced that she plans to remain in Los Angeles and use her 5th year of eligibility with the Trojans in the 2024-2025 season.

Dobler made the announcement on Instagram, saying that she would be participating in the school’s progressive degree program while pursuing a master’s in astronautical engineering. The progressive degree program allows high-performing undergraduate students at the school to overlap coursework for their undergraduate and master’s degrees simultaneously, usually meaning a shorter timeline toward completion of the latter.

In the classroom, Dobler was named a member of the CSCAA Academic All-America Women’s At-Large Second Team last year with a 3.71 GPA in Astronautical engineering, in addition to numerous other Academic honors. She is also the Secretary of the Trojan Athletic Senate.

She shines in the pool as well: her 56.94 in the 100-yard breaststroke from the Art Adamson Invitational is currently the fastest time in the NCAA, and just slightly slower than the 56.93 that won her the NCAA title last season. She is the 6th-best performer in the history of the event.

Dobler, like all Division I athletes, received an extra year of eligibility for competing during the COVID-19 hammered 2020-2021 sports season when she was a freshman. While many athletes have used that 5th year to transfer and pursue academic opportunities at other schools, Dobler has opted to stay put and work on her master’s degree at USC.

Between a lot of transfers out, a struggling men’s team, and the transition to Lea Maurer as full-time head coach starting this season, there have been questions about the program’s stability. This announcement by Dobler, however gives a USC program in a state of transition some stability going forward, knowing that their best athlete on either team plans to stay put for the next two-and-a-half seasons.

She makes swimming and rocket science both look easy. Impressive!

I think you misspelled SMU

A bit of very good news for a program that’s been struggling for a long time.

I’ve only ever heard good things about the astronautical engineering program.