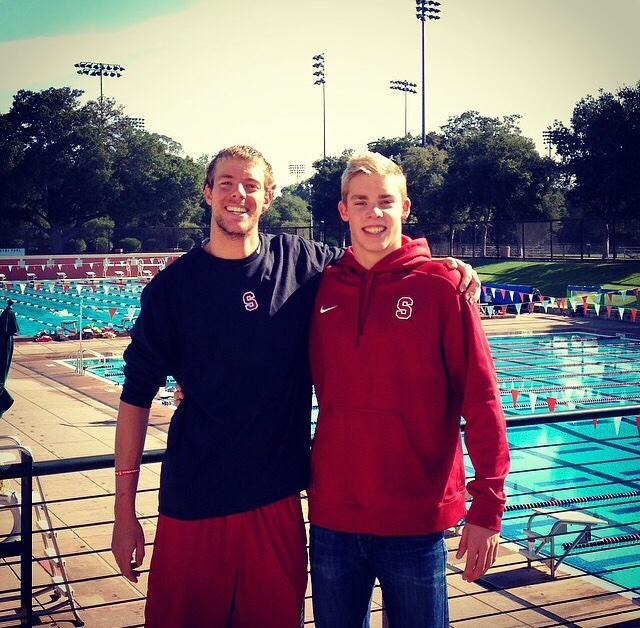 The Stanford men have gotten their second big verbal commitment in the class of 2015, with Junior Nationals silver-medalist Matt Anderson verbally committing to Stanford. The news was announced this week on the Twitter account for the Phoenix Swim Club with whom he trains.

Editor’s note: This Matt Anderson is one of at least two Division I-caliber Matt Anderson’s in the class of 2015. The other one is from The Woodlands, Texas.

Anderson, one of the better swimmers to make the transition over from the Arizona Marlins to the Phoenix Swim Club banner when the two clubs merged this summer, is primarily a breaststroker, with a decent sprint freestyle as his secondary specialty. His best times in yards:

Anderson dropped 7 seconds in the 200 yard breaststroke as a junior and almost 4 in the 100 to leap onto the radar of top-10 programs like Stanford. In the 100, he swam the 8-best 100 yard breaststroke times of his career in the same season. That has left him about a second short of NCAA qualifying in the 100 and two seconds short in the 200, though we expect those invite lines to creep faster in the next few years. At any rate, even though he won’t be able to hold those impressive rates of improvement over the next two years, if Anderson puts in any sort of a normal improvement for a high school senior and college freshman, he should be an NCAA qualifier as a freshman.

Did’t I see you cheering for Wisconsin at the Arizona meet? hmmmmmm

A great pick up indeed for the Cardinal! Don’t forget sophomore Charlie Wiser – he isn’t playing water polo this year and may have a break out season….

Congrats to Matt Anderson and his Coach Michael Maczuga!

Welcome to the fam!

Anderson is a good and important pick-up for Stanford. They do have a need for breaststrokers, though Ogren will be a significant piece to that puzzle for the next four years. Anderson adds an excellent second swimmer to their breaststroke group. And, if Weiser can get back to his form of old (he’s not listed on the water polo roster this year, so might focus more on swimming?), they will have at least 3 strong breaststroke swimmers, though Le did admirably well last year. Looks like Anderson’s improvement curve bodes well for him and the Cardinal.

Don’t forget about Daniel Le, another talented sophomore breaststroker, along with Christian Brown, a junior.

So true, Ay…in fact, I did mention Le in my first post. He did quite well his freshman year and is certain to improve this year, as well. Lots of upward movement for him, especially since he went from a 55.1 to a 53.9. Christian Brown will hopefully improve his junior year…his first couple seasons didn’t see the time improvements that Le had. They’ll all help push one another this year, with Ogren at the helm of that training group…and Anderson will fall in nicely next year.

Stanford on the warpath!