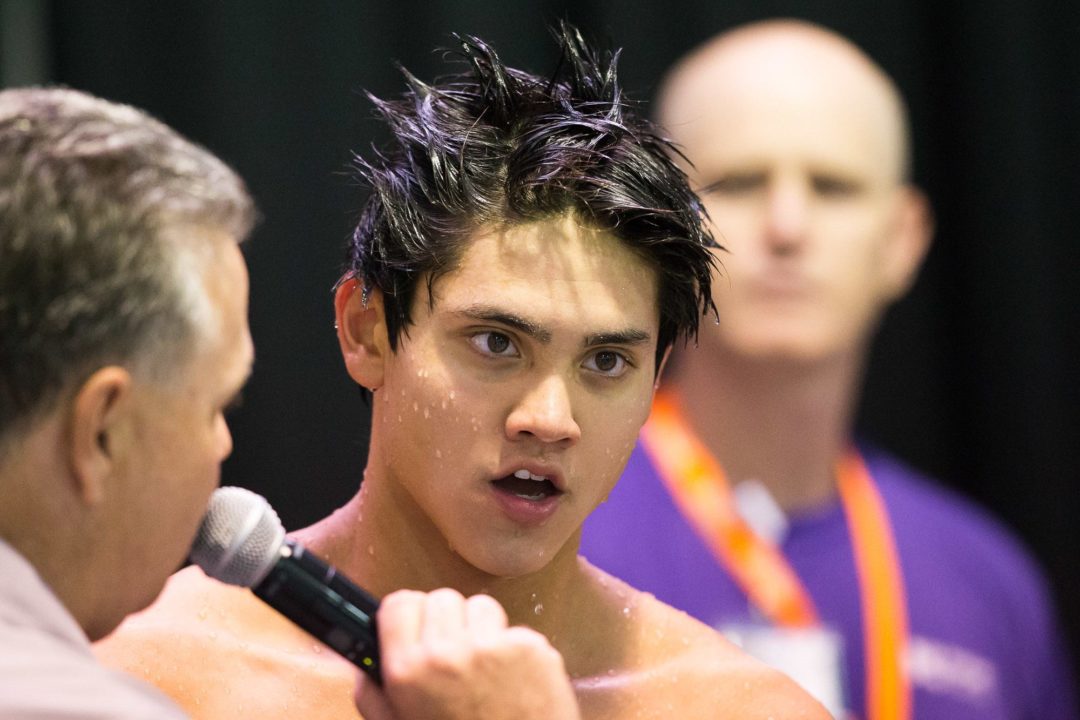 With three out of 5 days down at the 2013 Southeast Asian Games, American-based Joseph Schooling, who trains in Florida at the Bolles School, already has three gold medals to his name, all done over long course.

The meet, hosted in Myanmar.

Individually, Schooling’s first victory came in the 200 meter IM, where he was a 2:00.82. That left him almost a second shy of his lifetime best in the race, but also gave him a three-second victory ahead of his nearest competitor, Duy Khoi Train of Vietnam.

Schooling’s second gold came in the 100 fly. This is an event where earlier this year he broke the National High School Record in the United States in yards, and in meters he’s added a SEA Games title with a 52.67. He got a good push from Indonesia’s Tirady Fauzi Sidiq, who was 2nd in 53.14 – which shaved .03 seconds off of the Indonesian National Record. That National Record was held by Glenn Victor Sutanto, who was 3rd in this race in 53.93.

That is one of two individual medals for Sidiq so far; he also took a gold, and another National Record, with a 49.99 in the 100 meter freestyle. He will be a strong candidate to medal in the 50 and 200 freestyles, as well as the 200 fly as this meet goes on.

Schooling’s 3rd gold came as part of a Championship Record-setting 800 free relay, which marks Schooling’s 3rd Championship Record in 3 swims at this meet so far. He combined with Yeo Kai Quan, Danny Pang Sheng Jun, and Quah Zheng Wen for a 7:26.67; Schooling led-off in 1:50.86, but it was his teammate Quan who had the best split, marking 1:50.72. That swim also took over four seconds off of the Singapore National Record, as well.

Bego was the first Malaysian swimmer to qualify and compete in three events at a single Olympics, and at only 24 years old will hope to make an even bigger impact in 2016. This swim marks at lest Bego’s 11th all-time SEA Games title as one of the more decorated athletes in the event’s history, even though he sat out the 2011 event.

Also a noteworthy result – 15-year old Singaporean Darren Lim, whose sister came to the United States for college, was a 51.65 to place 7th in the final of the men’s 100 free.

On the women’s side of the meet, top honors so far go to Vietnam’s Nguyen Thi Anh Vien, who has won the titles in both the 200 back and the 200 IM. In the 200 backstroke, she was a 2:14.80, which breaks the Championship Record, and in the 200 IM, she was a 2:16.20 for a relatively handy win as well. Her combined margin of victory in those two events is over 7 seconds.

The Thais have been cleaning up in the freestyle events so far, with Natthanan Junkrajang winning the 100 in 56.23, and Benjaporn Sriphanomthorn winning the 400 in 4:14.23.

Other women’s winners include:

The winner of Women’s 800m freestyle is Khoo Cai Lin (Malaysia) with 8:49.51. Iffy only win the slower heat.
and the name for the 100m freestyle champion is TRIADY Fauzi Sidiq.

where does he train?

Triady Fauzi is 22 and as far as I know, trains in Indonesia. There are a couple of Indonesian swimmers who train in Singapore, but Fauzi is not one of them

where does he train?

Just for information, Malaysia and Singapore use unique style to list their athlete names.
For instance: Danny Yeo (his western name) or Yeo Kai Quan (his Chinese name), they will list it as: Yeo Kai Quan Danny.
Yeo is his family name, and it will be write in the front of his chinese name.

So you can write it as Danny Yeo to be simple. 🙂