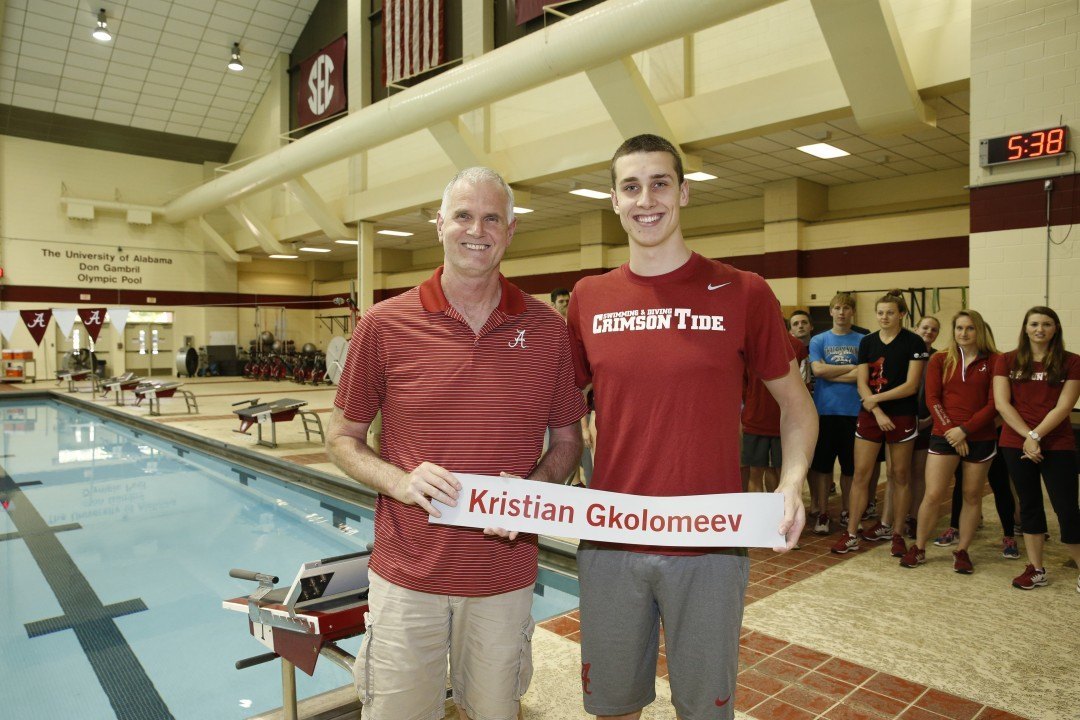 Jonty Skinner (left) coaches one of the fastest sprinters in the NCAA Kristian Gkolomeev, among others, at the University of Alabama, and is a South African native. Archive photo via Amelia J. Brackin

The question was brought about by the fact that South Africa had qualified 11 men, but 0 women, for the 2016 Olympic Games, despite the fact that all-time, South Africans women’s swimmers have had as much Olympic success as their men.

Prinsloo’s thoughts focused on simply being too early for a young, talented group of swimmers aged 16-19, who if they continue to train toward the Tokyo 2020 Olympics, will achieve FINA ‘A” standards.

Another voice, however, has joined the conversation, and that’s the voice of American-based coach Jonty Skinner, who is the associate head coach for the men’s and women’s team at the collegiate University of Alabama team. Skinner has a lengthy resume, including coaching 20 gold medals, spending 6 years as the head coach of the USA Resident National Team, 8 years as USA Swimming’s Director of Performance Science and Technology, and holding a similar technical role with British Swimming. As an athlete, he was a 19-time All-American, and a World Record holder in the 100 short course meter freestyle from 1975-1981.

While many of his accolades have been earned in the United States, Skinner was born in Cape Town, South Africa, and would have represented the team at the 1976 Olympics were South Africa not still banned as a result of their apartheid policies.

Below, read Skinner’s thoughts, unedited and in their entirety, on the South African Olympic Trials, and specifically why the women’s program wasn’t more successful.

Some thoughts after watching the Trials.
There are no end of athletes swimming in that meet. This hasn’t changed much in decades. South Africa is a bastion of talent, and we are probably one of the best countries in the world with regards to the number of great athletes relative to the total number of swimmers in the country.

Skills
This is a glaring weakness. Outside of a few at the very top, the masses don’t show a lot of technical expertise when it comes to executing technique or transitions around walls. In my mind this is a lot of wasted opportunity. Granted squad sizes and facilities make this hard, but you can either complain and get nothing done, or you can figure out how to get it done.

The 5th stroke
This was another area that was weak outside of a chosen few. There is so much opportunity in getting better at UW kicking, but I saw few who actually looked like it was something important. This has to be developed when their spines are more flexible and swimmers should be groomed for success in this area at a later stage in their career. If you race against people in the USA and you’re weak on walls and UW skills, you will lose by a large margin. It was one of the biggest areas that we developed in Chris Reid

Quality of the events at Trials
I understand that economics drive this issue, but you have a lot of swimmers at that meet swimming average times and saying “I was at the Olympic Trials”. There has to be something that makes it much tougher to get there. Too many swimmers will see this easier opportunity as their pinnacle meet. The more the country allows this to continue, the further you will move away from mainstream elite level swimming

Training abroad
This isn’t for everyone, and not all schools in the USA will provide you with the kind of focus and training to get a lot better. Granted if all your looking for is a way to pay for University costs, then there are no end of them. However, for those with a high level of commitment to excellence and wanting to get an education at the same time, it’s a great place to do it. The level of competition in some leagues is way higher than SA and you don’t have to travel to Europe to get that. You can hone your skills against some of the best, and then take that experience forward. Plus as someone stated earlier, in the USA, coaches train the entire package. They have the facilities and the time to do that.

Women
In general in my opinion, they’re not strong enough. What brought this home was watching the 100 & 200 backstroke events and noticing that VERY few swimmers could hold their “pull up or take your marks” starting position. Many of them were moving enough to get DQ’d. Too me that’s a huge red flag & if those events are a true reflection of the country then it is one of the underlying issues that need to be addressed. In most weeks I send my female swimmers through 6 dry land sessions a week. 3 weight (Olympic style lifts) and 3 core&body weight based sessions. There is no question in my mind that you can approach development from a lot of different directions, and if you’re into the high volume system ( 60K or more a week), then doing extra land sessions won’t necessarily work at all. So this is an option, but one that might need to be looked at in general.

Surprisingly, you left out the fact that Skinner broke the 100 free long course world record at US Nationals only three weeks after the Montreal Olympics, and it was in Montreal that Jim Montgomery became the first person to break the 50 second barrier with a 49.99. Unfortunately, Skinner was not allowed to swim at the Olympics due to his South African nationality. His time of 49.44 was the wr until Rowdy Gaines broke it in 1981 in a time trial, going 49.36.

Check it out Mel — The pool is still there and it is still too long — Philadelphia 1976 — why won’t anyone acknowledge the truth and set the record straight — Jonty has an email from one of the officials who confessed to measuring the pool the night before the meet — he said they all agreed to keep the fact that the pool was too long a secret. But he wanted Jonty to know after all these years. He said he was an engineer and he did the math — Jonty’s record wasn’t broken until Matt Biondi !!!!

There is an elephant in the room . .

Gina, Pray do share the muzzled Mammoth. Could it be something political 🙂

Race but you already knew that .

Let’s not forget the virulent homophobia in college which nearly got him thrown out of a fiction writing class.

Very informative article. Thank you. Jonty’s comments & analysis are quite good. He definitely pays attention. No wonder he has done so well in swimming post-competition.