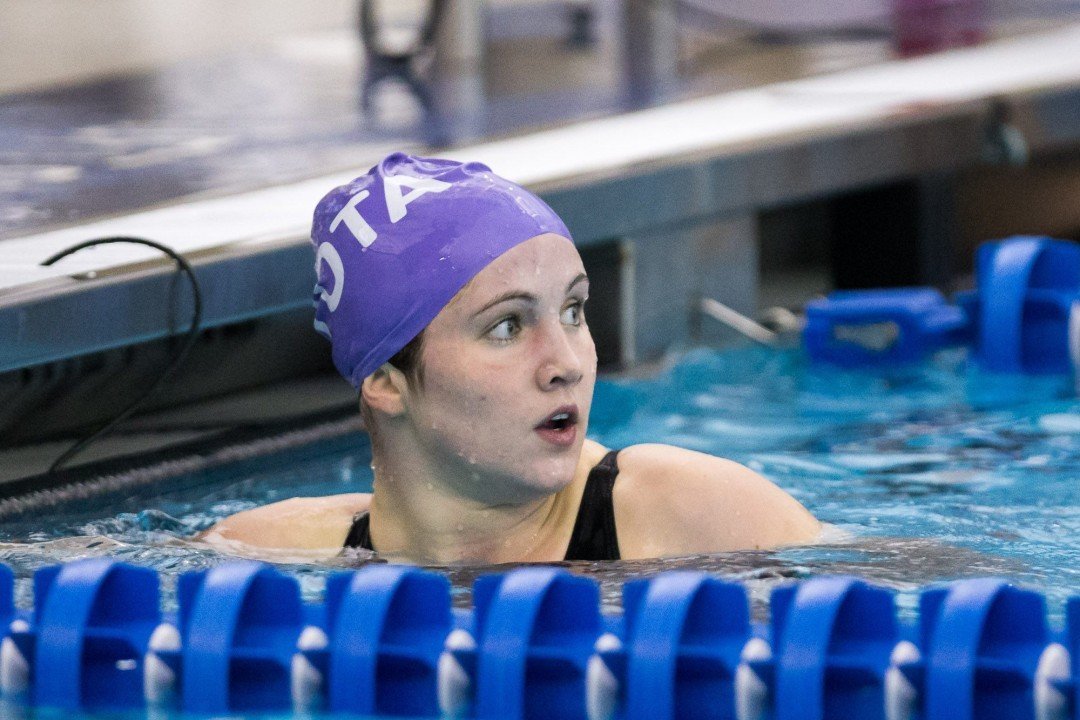 Olvia Ontjes from YOTA, meanwhile, skipped the 50 free to focus on the 200 breast this year, and so far the decision has paid off. Archive photo via Tim Binning/TheSwimPictures.com

Day 2 of the 2014 YMCA Long Course National Championships in Indianapolis, Indiana saw the beginning of the real thick action after strictly a distance day on Monday.

This meet is the more lightly attended of the YMCA National Championship meets (as compared to the yards version in the spring), but with USA Swimming now recognizing it as a selection opportunity for the Junior National Team, it’s slowly becoming an East Coast option for more-and-more YMCA teams when Junior Nationals is held across the country as it is this year.

Among the headline acts on Tuesday in the finals will be Jonathan Rutter from the Powel Crosley YMCA in Ohio. He swam a 2:18.17 in prelims of the men’s 200 breaststroke to make him the top seed; he’s the defending champion and YMCA National Record holder in this event.

In  the finals, he’ll fight to hold off Jacob Limaldi (2:20.36) and Conner McHugh (2:21.21), both of whom are better than Rutter on the front-half, but neither of whom have shown yet the ability to compete with Rutter’s second 100 meters.

In the women’s 200 breaststroke, Olivia Ontjes from YOTA will be in the center lane after a 2:36.73. Last year, Ontjes was a finalist in the 50 free, but with a big reorder of the YNats event schedule from last summer, she’s now focused on this 200 breaststroke this year for her day 2 event and scratched the 50 free.

Ky-Lee Perry from the Wilton YMCA leads a still-deep field in that girls’ 50 free; she took the top seed in 26.39, and along with Ingrid Shu from Lakeland Hills, New Jersey (26.46) has a little separation from the rest of the field. North Carolina commit Caroline Baldwin is the 3rd seed in 26.66.

In the men’s 50 free, Brad Zdroik from Somerset Valley is the top seed in 23.73. He’s looking to fight off YOTA’s Colin Ellington, an NC State commit, who came in as the second seed in the morning in 23.85.

In the women’s 100 fly, Middle Tyger’s Amanda McNulty is the top seed in 1:02.03. This Middle Tyger team will be swimming their final meet under coach Peter Wright before he takes a new coaching job in the non-YMCA ranks in Houston.

Aly Sayed (56.11) is next in line to jump those two for the gold and silver in finals.

In the girls’ 400 free, Leah Braswell took the top seed in 4:19.37. The 14-year old is the next in line of what’s been several years of the York YMCA program in Pennsylvania developing these very young swimmers who are competing for National Championships.

She’ll be chased by a group of veterans, including Verity Abel (4:19.65), Alisabeth Marsteller (4:21.11), and the defending champion Caitlynn Moon (4:24.54), all of whom are at their last YMCA Championship meet before heading off to college. As an indication of the increasing qualify of this meet – the top 10 swimmers are all faster than the top seed from the 2013 prelims, and the time it took to make the A-Final this year would’ve placed 2nd overall in finals at last year’s meet.