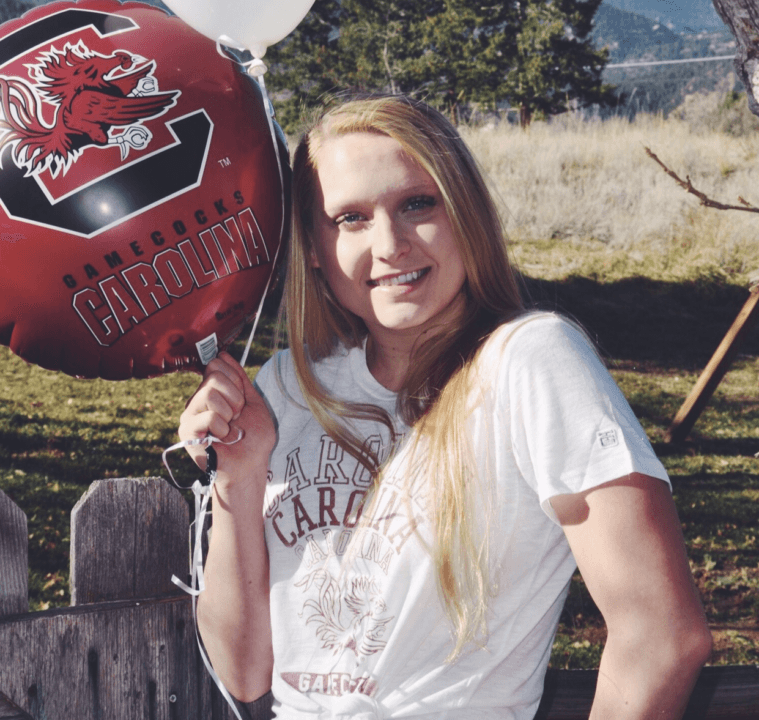 Canada will have some new faces representing the country in the premier 10km event at the 2019 World Championships in open water, including Kate Sanderson (above).

For the first time in federation history, Canada held a specific Open Water Trials meet on Saturday – albeit not on home soil. Instead, the meet was held on Grand Cayman in the Cayman Islands just south of Cuba: about 2,500 kilometers (1500 miles) from the nearest Canadian soil.

The result was small fields for both the men’s and women’s races: only 9 swimmers competed in each.

The men’s race featured a huge upset at the top. Hau-Li Fan and Eric Hedlin, both 2018-2019 National Teamers traded leads back-and-forth for most of the race, but in the last lap, Jon McKay of UVic- Pacific Coast Swimming made a big move to take the lead and would hold on for the eventual win.

“I knew Eric and Hau-Li have a lot of back end speed. I just wanted to make sure that I got out ahead and had a good finish there, which I was able to do,” McKay said. “I was definitely like, 500 more metres, I would have been toast. They were gunning me down and I was just trying to do it for the lads.”

This gives McKay his first ever senior A National Team spot and a swim at both the World Championships and the Pan American Games. Fan, from the UBC Thunderbid Swim Club, finished 1.4 seconds back to take the 2nd spot on the worlds team.

“Coming into the last 100 metres into the finish I knew I had a good chance of still making the team, so I just sprinted,” Fan said. “It’s good I made the team but I wanted to swim that race like I wanted to win from start to finish. Going to worlds it’s going to be a really deep field and if I want to be Top 10 you’ve got to be at the front from start to finish. I’ve still got a little bit of work to do.”

McKay, with his win, knocked his teammate Hedlin out of the 10k for the World Championships. Hedlin was the silver medalist in that event at the 2018 Pan Pac Championships: 6 seconds behind American Jordan Wilimovsky.

Among the swimmers totally absent from the race were the two that represented Canada at the 2017 World Championships in the men’s 10k: Philippe Guertin and Richard Weinberger. Guertin retired after losing his funding in 2017.

The reason that this is crucial is because if either McKay, Fan, or both finish in the top 10 at the World Championships in the 10k, then all of those other big names (Weinberger, Hedlin) will be shut out of the Olympic Games. If McKay and Fan miss out on the top 10 at Worlds (or a continental invite), then Canada will have the chance to send swimmers to the last-chance Olympic qualifier that is expected to be held next year some time.

The women’s race saw a wave of youth as well, as 19-year old Torontonian Kate Sanderson won the women’s race by more than a minute. She made a huge move on the 4th lap as the men’s pack lapped the women’s pack (the men started 10 minutes ahead of the women). She took advantage of that fact and broke a lead wide open from the rest of the women’s field before finishing in 2:03:22.4, ahead of Island Swimming’s Chantel Jeffrey in 2:04:14.0.

“I was leading most of the race and quite a few of us were swimming in a line. I felt like if I did that the whole race I might not have as much in the tank at the end,” Sanderson said.“I knew that if I got a draft, even if it was for like 20 or 30 seconds, that the girls would break up because the guys would trample over them and you can’t really tell who’s who. I got quite a good draft so that kind of made the difference on the fourth lap.”

Those will be Canada’s two entrants in the 10km race at Worlds. Sanderson finished 13th at Pan Pacs last year (10th in the 2-per-country rankings), while Jeffrey will make her senior A National Team debut. Sanderson trains in the United States at South Carolina and attended high school in Colorado.

Jeffrey beat-out veteran Stephanie Horner by 3.8 seconds to grab that 2nd spot in the 10km race. Horner is a 3-time Canadian Olympian and was the country’s top finisher at Pan Pacs last year (8th) and at Worlds the year before (28th).