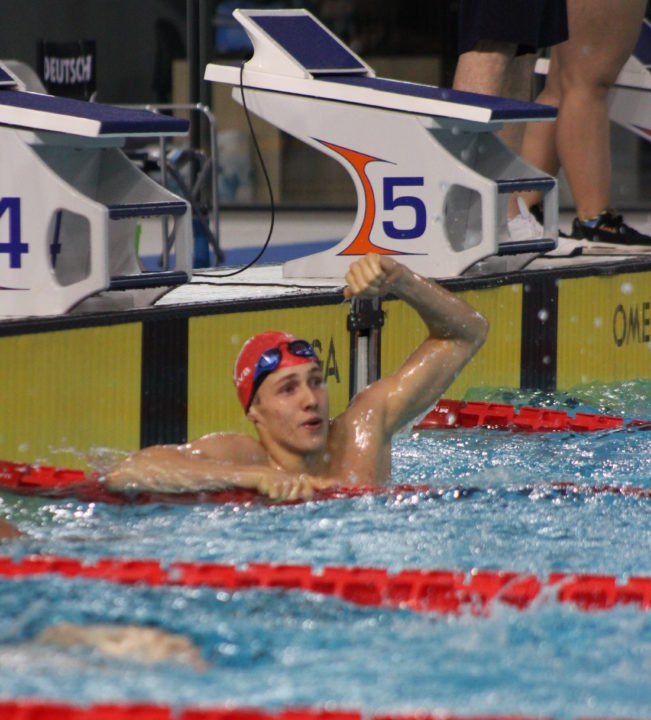 Born in Colombia and a resident at the United Arab Emirates, Joaquin Gonzalez Piñero is the new Argentinian national record holder for the men's 200-meter IM. Current photo via Andrés Tomasone

Several records have been set during the 2019 Argentinian Summer Championships. Racing at the same pool where the Buenos Aires 2018 Youth Olympic Games took place, 17-year-old Joaquin Gonzalez Piñero set a new senior national record in the men’s 200-meter individual medley in a time of 2:03.54 during the event final.

The story behind Gonzalez Pinero is quite unique. Son to an Argentinian mother and a Colombian father, he acquired the Argentinian nationality when he was a child, although he was born in Colombia. Since then, he has lived in Dubai, United Arab Emirates, where he trains. He says that he had always wanted to swim for Argentina, which he had already done in 2018 when he raced in the 200-meter IM and 200-meter butterfly during the Buenos Aires Youth Olympic Games.

Scarcely one year and two months after such experience, Gonzalez Piñero raced again the 200-meter IM in Buenos Aires, representing the Club Sociedad Alemana de Gimnasia de Villa Ballester swim team, the triumphant team in these championships. During prelims, he had already swum under the prior national record after clocking a time of 2:04.35, and then brought that down to 2:03.54 in the final.

Gonzalez Piñero is now less than four seconds off the minimum qualifying standard set at 1:59.67 by FINA.

The prior record holder, Santiago Bergliaffa, set the then national record time at 2:04.62 in early 2019 during the national championship which took place back in the month of January. However, the 17-year-old rejected the invite to race at the 2019 Pan American Games where he had been selected to swim the 400-meter IM, citing lack of motivation.

Other highlights from the third day of competition at the Natatorio del Parque Olímpico de Buenos Aires swimming pool came in the form of a double triumph by Guido Buscaglia in the 50-meter freestyle (22.72) and 100-meter butterfly (54.73). Ivo Cassini won the 1500-meter freestyle, hitting a “B” standard for the Olympics along the way after swimming a time of 15:22.13.

When it comes to the women, the most exciting final took place in the 200-meter butterfly, as it was a one-on-one battle between Virginia Bardach and Delfina Pignatiello. Pignatiello, who has also hit “A” standards for Tokyo 2020 in both the 400 and 800-meter freestyle events, helped set the tone in the aforementioned event, taking second place in 2:17.50 after Bardach, 2:12.67, who similarly sits four seconds off the minimum qualifying standard for next summer’s Games.