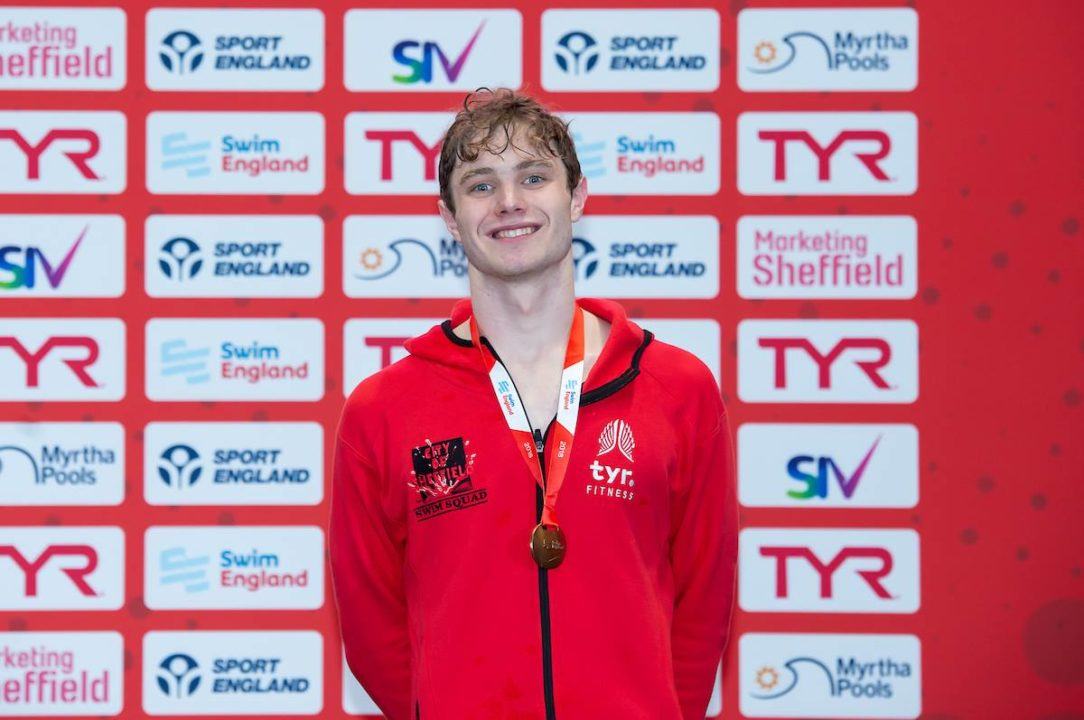 Jay Lelliott made the most of his Swim England Winter Championships, collecting 4 gold medals over the course of the meet. Archive photo via SWpix/Swim England

The 2019 Swim England Winter Championships concluded last night in Sheffield, but not before numerous personal bests were thrown down, gold medals were won and the squad from Loughborough made a clean sweep of every single relay.

Additionally, City of Sheffield’s Jay Lelliott made quite an impact on the meet, as the 24-year-old nailed 4 individual gold medals over the course of the competition.

Lelliott first took the men’s 400m freestyle with ease, notching the 4th fastest time of his career in 3:42.68. Winning the race by more than 3 1/2 seconds, Lelliott’s win represents his 5th consecutive medal in this event at these Swim England Winter Championships.

Lelliott’s next victim was the 200m back, where the man came within half a second of his lifetime best in a winning mark of 1:52.73.

Finally, Lelliott raced the 100m back and 200m fly within about 30 minutes of one another, topping the former event in a season-best 51.98 while also wrapping up gold in the latter in a mark of 1:53.80. His 200m fly marks a new personal best for the Sheffield star, overtaking his 1:54.83 from way back in 2014. With this outing, Lelliott has become Britain’s 7th fastest performer ever in the event.

Also of note in that men’s 200 fly was the fact that 16-year-old Edward Mildred scorched a new personal best of 1:56.72 for 3rd. That beats his 1:56.83 put up at this same meet last year, although the fact he turns 17 soon precludes his swim from checking in as a new British Junior Record.

Isabella Hindley of Brompton made her presence known at the meet as well, breaking 54 seconds for the first time of her career to seal up the women’s 100 free victory. After clocking a time of 54.39 in the morning heats, Hindley fired off a super quick 53.76 to top the field in the only sub-54 second time, as well as become Britain’s 12th fastest performer all-time.

The women’s 50m free also fell to Hindley, with the Brompton athlete getting her hand on the wall first in a swift 24.39. For good measure, Hindley also wrapped up silver in the 100m back, mustering a PB of 58.66.

Winning the women’s 100m back, however, was Chloe Golding. The 21-year-old City of Manchester swimmer punched a time of 57.84 for a new personal best, upgrading her silver from the 2018 edition of this meet.

Golding also earned the 200m back title for her 3rd consecutive year, clocking a personal best of 2:04.46.

Abbie Wood, of the International Swimming League (ISL), successfully defended her 200m IM title from last year. The Loughborough athlete produced a time of 2:10.42 to beat her competitors by about 3 1/2 seconds.

Wood also nailed the 400m free win in a time of 4:04.21, dropping over 6 seconds from her prelim outing. The 20-year-old found success in the 200m free as well, throwing down 1:56.66 to earn her 3rd individual gold. That represents the first time she’s been under 1:57, with her previous lifetime best sitting at 1:57.15 from last month’s Midlands meet.

Another ISL swimmer, Imogen Clark of Energy Standard, put up the quickest 50m breast time of 29.58 to successfully retain her title from 2018. She set the British Record at 29.43 while winning gold in 2018.

Among the Additional Winners: