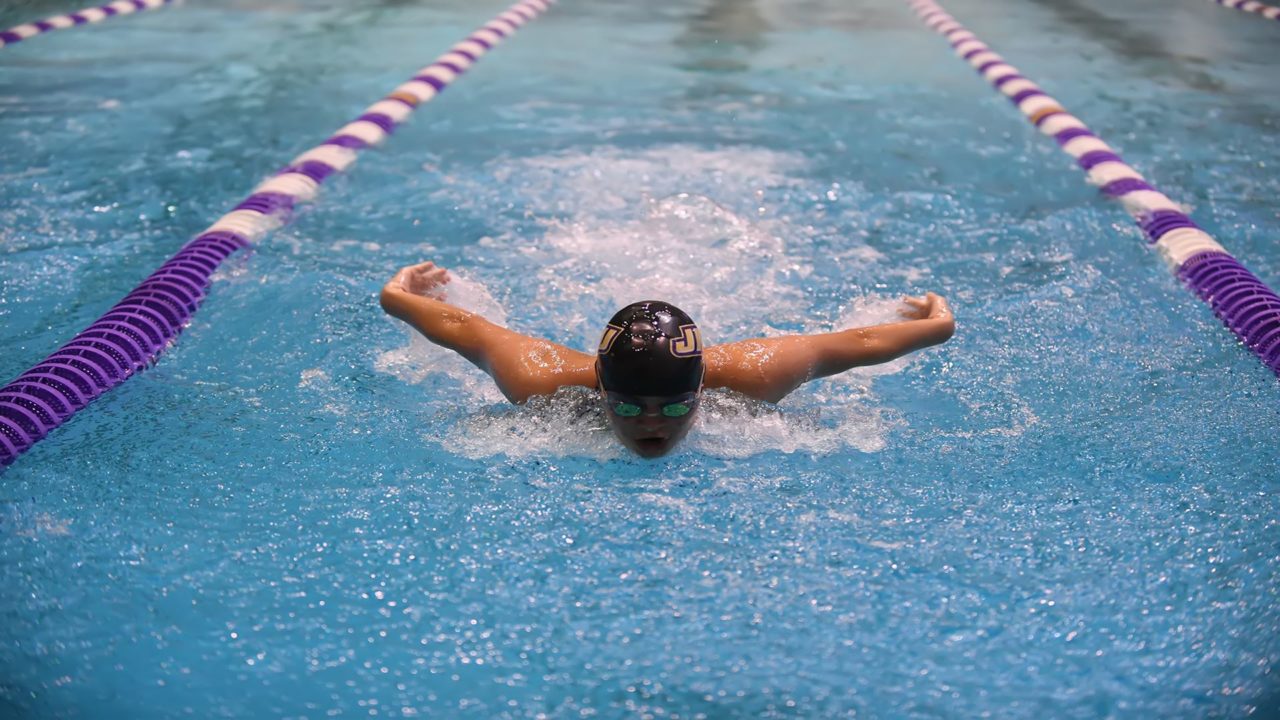 JMU earned first-place finishes in 10 of 16 events on the day, including strong diving performances with sweeps on the 1-meter and 3-meter boards as Faith Anderson won both events.

MEET NOTES
– JMU started on a high note as Anderson won the 3m with a 300.91 mark, followed by Hope Byrum in second at 299.18 while Sarah Stim closed out the top-3 with a score of 277.27. Both Anderson and Byrum received NCAA Zone qualifying marks.
– JMU took first through third in the 1000 yard freestyle with Jones capturing first with a time of 10:17.07 while Bailey Butler and Sidney Whitfield went second and third, respectively.
– Bonnie Zhang placed first in the 200 freestyle and Jill Santiago took second.
– In her first collegiate meet, Anbar won both the 100 and 200 backstroke events, touching the wall at 58.21 and 2:03.00, respectively.
– Whaley also captured two first-place finishes, picking up victories in the 100 and 200 butterfly events.
– Anderson stood atop the standings in the 3-meter, winning the event with a score of 298.42. Stim earned a second-place finish (295.35) and freshman Lindsey Hammar compiled a score of 278.71 in her first collegiate meet. All three divers earned a NCAA Zone qualifying score.
– Jones recorded her second victory of the day in the 500 freestyle (5:03.28) while Butler finished in second.
– In a close race, freshman Karen Siddoway claimed second (2:10.75) in the 200 yard IM and Megan Marsh finished third with a 2:11.49 mark.
– With Santiago, Zhang, Kristie Darmody and Sydney Kirsch, JMU secured the victory with a win in the 400 yard freestyle relay (3:31.60).

QUOTING HEAD COACH DANE PEDERSEN
“This weekend was a positive start to our competition season. We had a lot of inconsistencies in our scrimmage against Harvard which was expected for our first meet; however, the team made some great adjustments against Northeastern. The coaching staff was very happy about how the team recurved coaching and made positive adjustments. This weekend was a great platform to learn and progress forward into the next week of training and another meet. ”

UP NEXT
The Dukes return to Harrisonburg for their first home meet of the year as the Towson Tigers come to town on Saturday, Oct. 19. CAA dual action will start at 2 p.m. in Savage Natatorium in Godwin Hall.

BOSTON – Making its first home appearance of the 2019-20 season on Saturday, the Northeastern women’s swimming and diving team gave the defending CAA champions a competitive fight, despite the Huskies receiving the 184-116 defeat from James Madison at Barletta Natatorium.

The Huskies opened the swimming portion of the meet with their victory in the 200 medley relay. Sidney Smith, Klara Juliusson, Lena Spear and Clark notched the first-place time of 1:46.72, prevailing after a neck-and-neck battle with the Dukes’ top team.

Matilda Weiler narrowly outlasted James Madison’s Karen Siddoway for the victory in the 200 individual medley, winning the event by 0.18 seconds.

UP NEXT
Northeastern will return to the pool on Wednesday, Oct. 23, when the Huskies visit Boston College (6 p.m.).