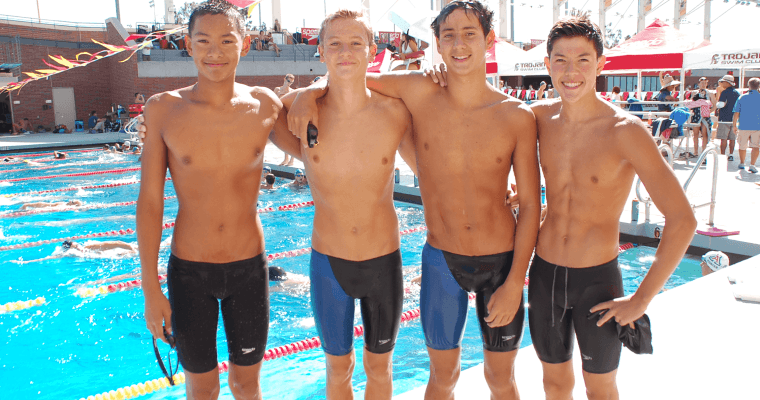 Irvine Novaquatics opened a busy summer swim weekend nationwide with a National Age Group Record in the 13-14 boys 200 meter freestyle relay on night one of the 2014 LA Invite.  Competing at the nearby Uytengsyu Aquatics Facility on the campus of the University of Southern California, the team of Owen Kao, Justin Nguyen, Andrew Koustik, and Hunter Hitchens clocked in at 1:41.09, just ahead of the previous record of 1:41.34 from Lake Oswego Swim Club back in 2008.

Splits of the old record from the Lake Oswego team (Daniel Chen, Nick Bode, Alex Lyons, and Gunnar Wolfe) weren’t available at the time of this posting.  Here are the splits from tonight’s Novaquatics relay:

This is actually the second NAG relay record from Irvine Novaquatics this season in this age group: Kao, Nguyen, Kevin Tu, and Hitchens took down the 800 meter free relay earlier this year.  With their best swimmers in top form, it’s very possible Irvine could break the 400 meter free record (3:40.75, from Wildcat Aquatics back in 2009) later in the meet.

Congratulations boys! What a special relay and a special memory you have created for yourselves!

Obviously Irvine Novaquatics has some exceptional talent in these four young men, it appears they almost took down King Aquatic Club’s 1:52.78 200 Medley. Tonight’s results are showing these same four boys clocked a 1:53.50.

Does anyone know what high school(s) these boys are attending? Should be an interesting CIF season for them.