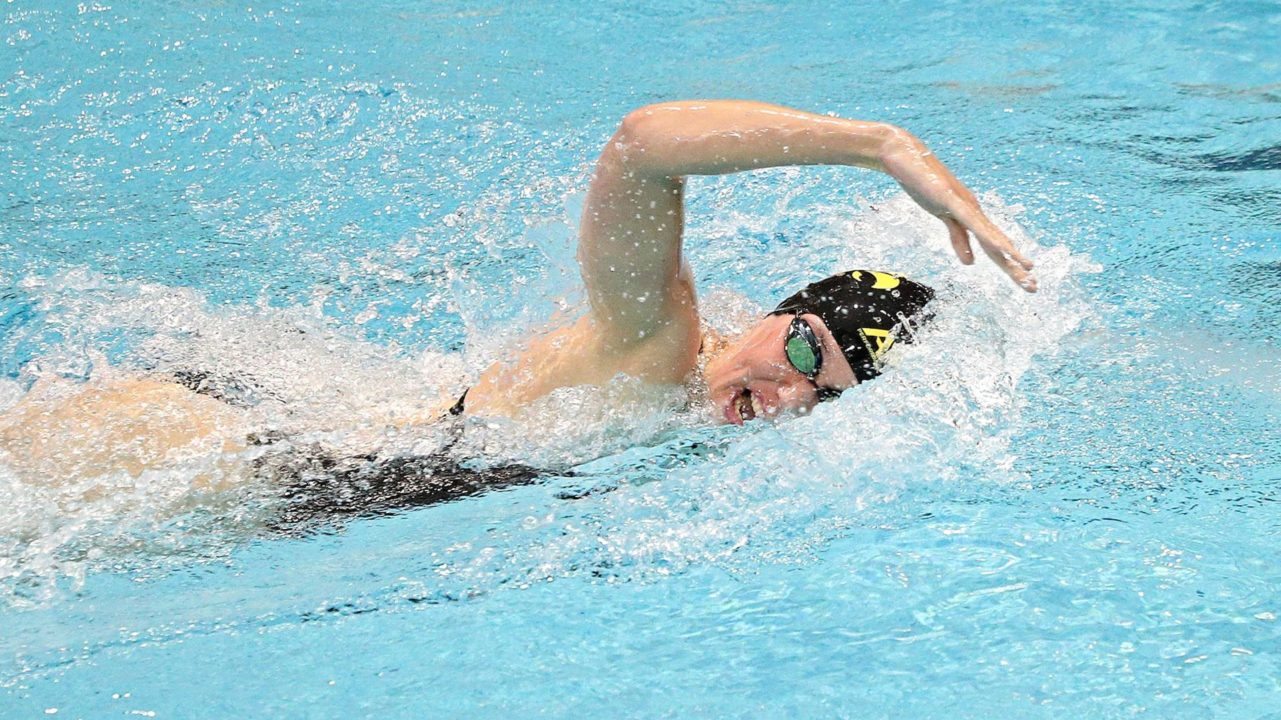 The University of Iowa swimming and diving team travels to face Northwestern in a Big Ten Conference dual Saturday at the Norris Aquatics Center. Archive photo via Iowa Athletics

The University of Iowa swimming and diving team travels to the Land of Lincoln to face Northwestern in a Big Ten Conference dual Saturday at the Norris Aquatics Center. Competition begins at 11 a.m. (CT).

The Iowa men are ranked 18th and it will face a Wildcat team ranking just outside the top 25.  Northwestern’s women’s team comes in at No. 25 in the poll.

AMONG THE B1G: MEN

The Iowa men are littered throughout the top-10 across the Big Ten Conference.

AMONG THE B1G: WOMEN

The Hawkeyes swept the Big Ten Conference weekly honors Dec. 18 with Kelsey Drake being named the Swimmer of the Week, Jayah Mathews the Diver of the Week, and Millie Sansome the Freshman of the Week.

Drake earned her second career Big Ten Swimmer of the Week honor (third Big Ten honor of her career) after setting a school and Beyer Pool record in the 200 fly.  She won the event by more than five seconds over the field in an NCAA “B” qualifying time of 1:57.87.  Drake completed her sweep of the butterfly events with a time of 54.06 in the 100 fly and she captured her third individual title in the 200 IM in 2:02.78.

The University of Iowa Student-Athletes Academic Services (SAAS) announced that Kelsey Drake had been named the Athletic Department’s December Female Student-Athlete of the Month.

Drake set a school record in the 200 butterfly (1:58.18) at the Minnesota Invitational on Dec. 8. The following week, she broke the school record for a second time and swam to a Beyer Pool record in the dual win at Iowa State. Out of the pool, Drake has completed about 150 volunteer hours thus far with multiple agencies including Habitat for Humanity, Stead Family Children’s Hospital, Ronald McDonald House, Day of Caring, River Run, Dance Marathon, and more.

At the Minnesota Invitational in December, the Hawkeyes took down four school records.

Senior backstroker John Colin notched an Olympic Trials time standard of 56.47 in the 100 back on Dec. 8 in Minneapolis. Iowa’s leading backstroker in the 100, Colin got the cut the second time around after narrowly missing it in the morning session.

Five freshman lead pace the Hawkeyes in 10 events across both the men’s and women’s teams this season.  The freshmen who lead the team are:

The Hawkeyes have earned 10 Big Ten Conference weekly honors during the 2019-20 season.

The men’s team has nine swimmers that have posted NCAA “B” qualifying standards in nine events during the 2019-20 season, while the women’s team has three swimmers notch “B” times in seven events.

After hosting the Big Ten Men’s Swimming & Diving Championships in 2019, the women are coming to Iowa City in 2020.  The Hawkeyes will host the 2020 Big Ten Championships at the Campus Recreation and Wellness Center from Feb. 19-22.  It is the first time the women’s championship has been in Iowa City since 2012.

The Hawkeyes return to action Jan. 24-25, traveling to South Bend, Indiana, to participate in the Shamrock Invitational. Three sessions each day — at 9 a.m./4 p.m./9 p.m. — will comprise the invitational.