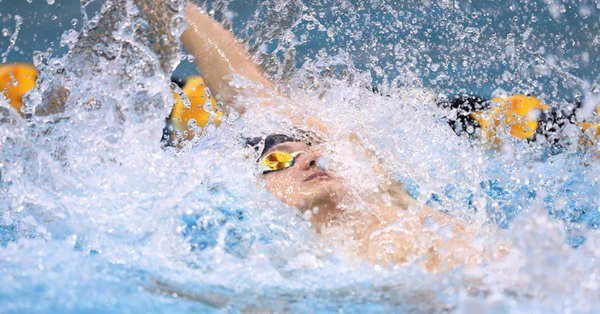 The University of Iowa swimming and diving team dominated in its final regular season meet of the season, sweeping Western Illinois and Northern Iowa at the Campus Recreation and Wellness Center. Current photo via Iowa Athletics

IOWA CITY, Iowa – The University of Iowa swimming and diving team dominated in its final regular season meet of the season, sweeping Western Illinois and Northern Iowa at the Campus Recreation and Wellness Center.

The Iowa men finish the regular season with a 6-2 dual record, the women are 6-6.

FULL SWEEPS
The Hawkeye women started the meet with a 1-2 punch in the 200-medley relay followed by a top four sweep by the men.

Senior Will Brenner dominated on the boards for the men with two first-place finishes, winning the 1-meter with a score of 349.35 and 3-meter with a 394.30. Brenner’s score off the 3-meter was a career best.

The meet pit the Leathernecks’ men’s team against Iowa where they fell, 151-65, while the women raced against the Panthers and Hawkeyes, dropping both competitions, 181-43, and 172-49, respectively.

“We had a tough meet today, but we had the opportunity to see some races that will result in possible relay positions at conference in a couple of weeks,” said head coach Greg Naumann.

The Leathernecks’ relay teams finished top 5 in each of their competitions, including a pair of fourth place times in the women’s 200-yard medley (1:51.44) and 200-yard freestyle (1:42.22). Western raced two teams in the latter event, where Chance McQuigg, Nicholas Kontos, Brennan Bladel, and Adam Peterson posted the best relay finish of the day with a second-place time of 1:27.25.

“My main focus was to get those last couple of swims in to help our positions at conference for individual events and relays.  We’ve had a tough week with a meet on Sunday, and then have back-to-back meets this weekend.  They’ll be a little tired, but all we have is a couple of weeks of resting before we leave for the Summit League Championships.”

Crystal Florman timed in at twenty-three second and forty-three hundredths of a second (23.43) in the 50 freestyle for first-place. Florman clocked in at 50.78 in the 100 freestyle for second-place.

Taylor, Florman, Lauren Kacmarynski, and Abby Meyer finished in second place in the 200 freestyle relay, timing in at 1:35.50. The Panther relay team of Madison Rinaldi, Lauren Havertape, Kelsey Ostrowski, and Kacmarynski took third in the 200 medley relay, swimming a combined time of 1:49.52.

Rinaldi timed in at 59.14 in the 100 backstroke, swimming into fourth-place.

The Panthers swimming and diving team returns to action Feb. 20 to 23 at the Missouri Valley Conference Championships in Columbia, Missouri.