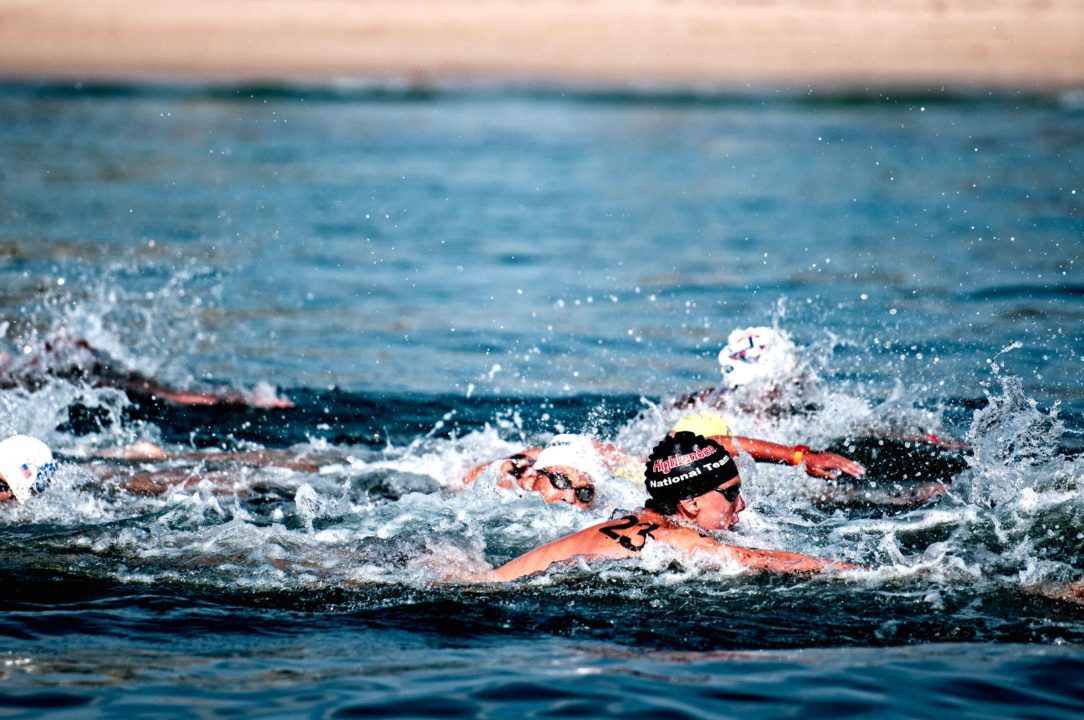 The open water qualification system for the 2016 Olympics is unchanged from 2012. Stock photo via Mike Lewis/Ola Vista Photography

The IOC has announced the qualification system for open water swimming at the 2016 Rio Olympics, along with all of the aquatic disciplines aside from pool swimming. See the four available now below.

Of primary interest to our audience will be the procedures for open water swimming, which remain unchanged from the 2012 Olympics. Further, the IOC confirmed that the 10km will remain the only open water race in the Olympics, despite the continued expansion at the World Championship level now up to 4 per gender including the 5km team event.

There has been a big push to either expand the overall field for open water swimmers, which seems to be international. The strong open water countries have also pushed to expand the per-nation quota system, because as we’ll explain in a minute, the current system makes it very difficult to get more than one male or female open water swimmer into the Olympics.

This one is pretty simple. The top 10 swimmers in the 10km swim at the 2015 World Championships will qualify automatically for the 2016 Olympics. Putting two swimmers into the top 10 here is the only way for nations to qualify multiple open water swimmers in a gender to the Olympics.

For some perspective, had the 2013 World Championships been the selection meet instead of 2015 in Kazan, the only countries eligible to send two to the Olympics would be:

By this point in the selection process, nations with swimmers in the top 10 at Worlds are done. They no longer participate in the process, whoever was in that top 10 are their qualifiers and that’s it.

Every other country can send up to 2 men and 2 women to the FINA Olympic Marathon Swim Qualifier (site not yet announced) in early 2016. At this qualification event, each country can only qualify 1 per gender, so the top 9 finishers from unique countries will go to the Olympics.

Each continent is ensured of 1 female and 1 male. After the top 9 are worked through, FINA will then again pull out every swimmer who has already qualified, and every second finisher from a country already qualified, at the 2016 Marathon Swim Qualifier meet.

With the remaining list, they will then go through and select the top finisher from each continent.

The home country, in this case Brazil, automatically gets one male and one female bid to the Olympics in Olympic tradition. If the host team already has qualifiers, then their spots will be reallocated back to the next-best finishers in step 2.

This can be confusing, so we’ve laid out a hypothetical finish scenario. Note that there is no prediction here, we’ve tried to set up certain illustrative scenarios.

If this is the nationalities of the top 10 at Worlds in the men’s 10k:

And if these are the nationalities of our top 19 finishers at the 2016 Olympic Marathon Qualifier, including a continental notation:

Have any questions about the above? Just ask, and we’ll work through a scenario with you.

So, there’s some traps here. If a country’s goal is to send the athlete(s) most likely to medal at the Olympics, then they would perhaps prefer to have no qualifiers out of 2015 Worlds and instead jump into the 2016 Olympic Marathon Qualifier, where they know they’ll be able to select their best swimmers.

The United States women in 2012 is a perfect example of this. Haley Anderson wasn’t on the Worlds team in 2011, nor was the United States’ 2nd-best open water swimmer in 2012 Ashley Twichell. Had the Americans put a swimmer in the top 10 at Worlds in 2015 (Christine Jennings and Eva Fabian were the two representatives), then Anderson couldn’t have earned her way to London where she won silver.

Now, we don’t expect anybody to throw the 10k at Worlds just for this reason, however, this catch-22 of sorts has been one of the biggest complaints about this qualifying procedure, and why many hoped for a change.

When will the time standards be released for USA Swimming Trials and the qualifying period begin?

This is certainly very complicated. What if Cambodia, say, came in 20th in the scenario above? Would they qualify as the highest Asian qualifier not already qualified by the top 9?

This selection process seems to favor continents with fewer countries. North America and Oceania seem to have advantages over Europe, for instance. What if, for instance, New Zealand had come in in the top 9 above (and Australia had qualified a swimmer at the 2015 Worlds. Would a top finisher from the Cook Islands, say, who’d place 40th then qualify? (how many countries are in Oceania anyway?)

FINA offered no changes to this system to the IOC. There are so many better ways to arrive at the best 25 athletes and eliminate the smaller countries from “playing games”. All individuals involved in this lack of progress have again secured their place in a nice free family trip to Rio.
Even one change like requiring a country to have finishers from qualifying race 1 (one) in order to enter qualifying race 2 (two) would make this process better.
Best of luck to the top athletes, which again may not meet and race head to head until the Games.