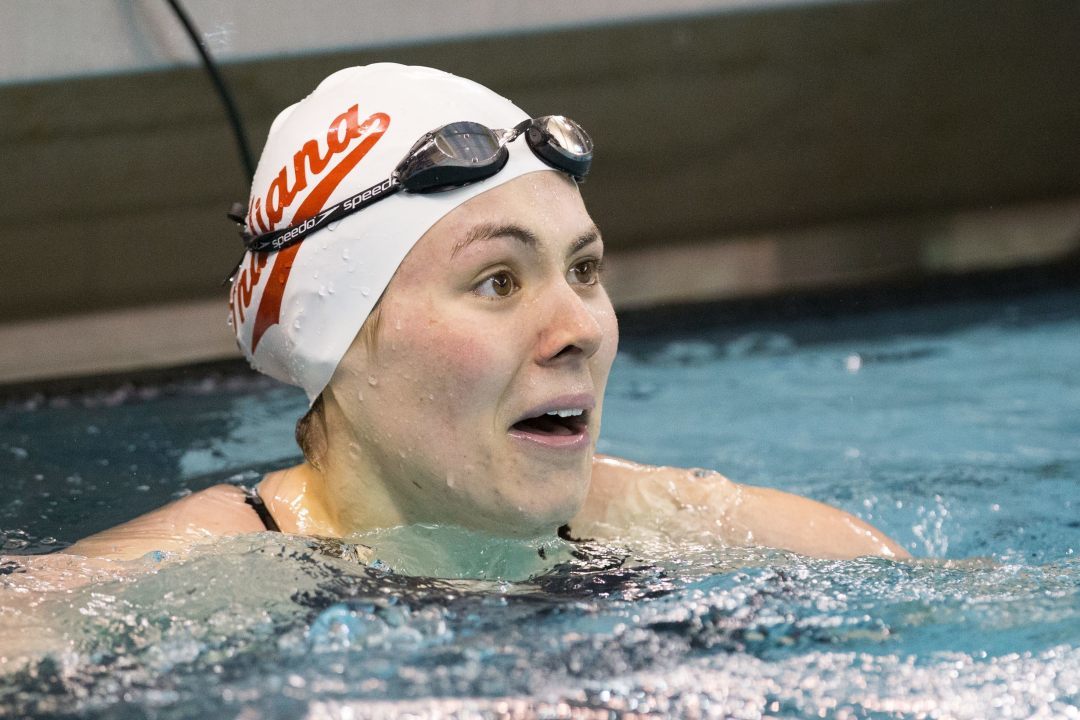 Defending NCAA Champion Brooklynn Snodgrass leads the nation in the 200 backstroke again in the 2014-2015 season. Archive photo via Tim Binning/TheSwimPictures.com

The Indiana Hoosiers have cashed in big after their televised dual meet against the Auburn Tigers on Friday, earning five of the six Big Ten awards handed out for the weekend.

That included defending NCAA Champion in the 200 back Brooklynn Snodgrass, who earned the Swimmer of the Week honor after winning the 200 backstroke in a very quick early-season 1:53.97. She emerged from the weekend with the fastest time in the nation over the American Record holder Liz Pelton, as well as a two-second margin for fastest time in the Big Ten.

Freshman of the Week went to Kennedy Goss, another Canadian, for winning the 200 free (beating Snodgrass) against Auburn. She posted a 1:48.75 in that race.

On the men’s side, all three awards went to Hoosiers, and all three gave an indication of where the program is headed. Anze Tavcar, just a sophomore, took Swimmer of the Week after sweeping the 50 (20.16) and 100 (44.09) yard freestyles against Auburn, and leading Indiana to a win in the 400 free relay (2:58.36) over the Tigers’ vaunted sprint group.

If he’s young, his fellow award winners are even younger. Freshman diver James Connor, an Australian, was named Diver of the Week when he won the 1-meter and the 3-meter events against Auburn; and another sprinter Ali Khalafalla won Freshman of the Week thanks to an anchor spot on both the 200 medley and 400 free relays. Individually, he was 3rd in the 50 free.

Not to be overlooked is the diver who broke the Hoosier run at the weekly honors: Nebraska’s Anna Filipcic. She’s a Nebraska native and is doing big things for the home-state team, having earned both of the Big Ten Diver of the Week honors so far this season. She won the 1-meter and 3-meter events over Nebraska-Omaha. Those both included NCAA Zone Diving qualifying scores and a personal best on the 1-meter.

Full honors, and a rundown of this year’s winners, are below.

· Earns his first Swimmer of the Week award

· Earns his first Diver of the Week honor

· Earns his first Freshman of the Week honor

· Recorded an NCAA provisional qualifying mark in the 200 back

· Earns her sixth Swimmer of the Week award

· Earned a personal best in the one-meter event

· Earns her third Diver of the Week honor

· Earns her first Freshman of the Week honor

There are some great match ups between top programs that the “national” swimming community would like to see in preparation of conference and the 2015 NCAA championships.

Timothy – the Pac 12* does televise meets. In fact, last year they televised many more than the Big Ten Network.

The SEC hasn’t announced their schedule for televised meets yet, but several coaches have told me that they’ve been told to expect televising of several of their meets this year.

The Longhorn Network also televises a lot of Texas meets.

I think Big Ten/Purdue was the groundbreaker a few seasons back though, when the BTN did it live. That was a big deal.

Now if I can find the Pac 12 and Longhorn channels on Direct TV if it carries them!!

By the way, Great site. It’s my go to site for swimming info.