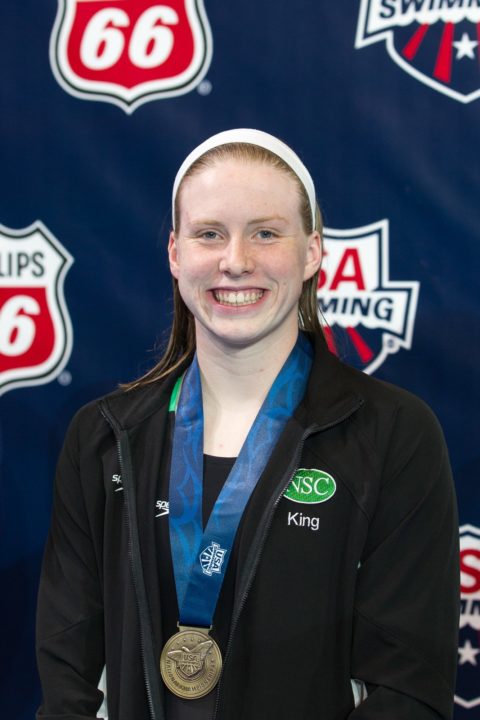 Texas high school swimming is divided into two classes: 5A (big schools) and 4A and under (smaller schools). Both meets will be swum at the University of Texas, with both teams swimming prelims Friday and finals Saturday (4A in the morning, 5A in the afternoon).

The overall mood of the state this year is that things feel a little bit slower than normal. There’s only one high school swimmer in Texas, for example, that collegeswimming.com has ranked in the top 50 recruits in their class of 2014 (plus two others who don’t race high school – Brett Ringgold and Simone Manuel).

That one is Texas commit Jonathan Roberts. He was battling a flu during his regional championship meet, but still had enough to cruise to the top seed in the 500 free in 4:29.54 for Southlake Carroll, as well as the top seed in the 100 back in 49.14. With his lead, the Southlake Carroll men and women are both looking to defend their 5A state titles. The Carroll men look very good, with the women’s race seeming more wide-open this year than ever.

In 4A, the defending champions on the men’s side from Stratford High School were hit hard by graduation, losing 104 of their 212 points just to individual graduations (including three individual state titles). The boys from Frisco Wakeland look like they’re in a great position this year – they were only 9 points back of Stratford last year, and while they had a few graduations, it was not as bad as their opponents.

The girls’ 4A meet last year was a runaway by Dallas Highland Park, but they had a lot of graduations and will only have 5 entries at this year’s state meet. That opens up a wide range of contenders, including Frisco and Friendswood High Schools.

See all of the call-up lists for Texas here.

The Indiana girls’ state meet will also be run this weekend at the Indy Natatorium on the campus of IUPUI in Indianapolis. Since 1986, this meet has been all-Carmel, and they’ve won 27 straight titles.

This year’s girls’ meet seems like it might be more of the same. Carmel has qualified an astonishing 20 swimmers to the state championship meet (16 as individuals, 4 as relay-only). If anyone were to give them a run, it might be Crown Point, who has two really talented freshmen (Kelsi Artim and Hannah Kukurugya) and are seeded 1st in both the 200 medley and 400 free relays.

The best race of the day, however, might not involve Carmel or Crown Point at all. Carmel’s highest ranked 100 breaststroker is junior Alex Clarke, the 8th seed, with Crown Point throwing up Artim, the 5th seed, but up in the battle for #1 are two American junior stars. Lily King, who swims for Evansville – F.J. Reitz, is the top seed in 1:00.80, and Bethany Galat, who swims for Penn, is the 2nd seed in 1:02.07. King set a 15-16 National Age Group Record in this event late last year, and Galat is the #1 breaststroke recruit in the senior class of 2014. We could see both crack a minute if their hearts are in this meet. The whole breaststroke field is deep, with 11 swimmers seeded at better than 1:05.

The boys will swim in two weeks at the end of February.

This meet is a really great one because of its depth. Even at other big meets where there’s a star-or-two to bring lots of attention, there can be a huge drop-off in talent after those stars. However at this meet, the events go about 10-deep everywhere with Division 1 caliber talent (in the 100 fly, for example, 5 swimmers are seeded under 55 seconds).

Other big races at this meet include Carmel standout junior sprinter Amy Bilquist matching up with Zionsville senior sprinter Alex Cleveland in the 100 free, where Bilquist (50.18) is seeded just barely ahead of Cleveland (50.19). The two will be closely matched again in the 50 free as the top two seeds.

Look for carmel girls to have insane drops this weekend. Would love to see crown point give them a run but they definitely taped to win sectionals (tezloff 49.2 spilt in the 400 fr relay). It was an epic 3 team battle last weekend between Munster, Lake Central and the victors crown point.

Also galat will beast mode the IM and BR.

Good Luck to all the athletes this weekend!

Indiana HS State meet is solid in every event. Looking forward to some fast swimming at IUPUI this weekend!

The 500 free is kinda “eh” You got some fast people on top but the gap between swimmers gradually gets wider.. but the rest are pretty solid.. I don’t know a lot about Indiana high school swimming but I’m assuming these are non-tapered times, in which case this is a pretty quick meet.. Definitely comparable to CIF-SS Division 1 Swimming which is the big show for Cali HS swimmers

James Counsilman. Where was “Doc” before IU and got his nickname tre thee?