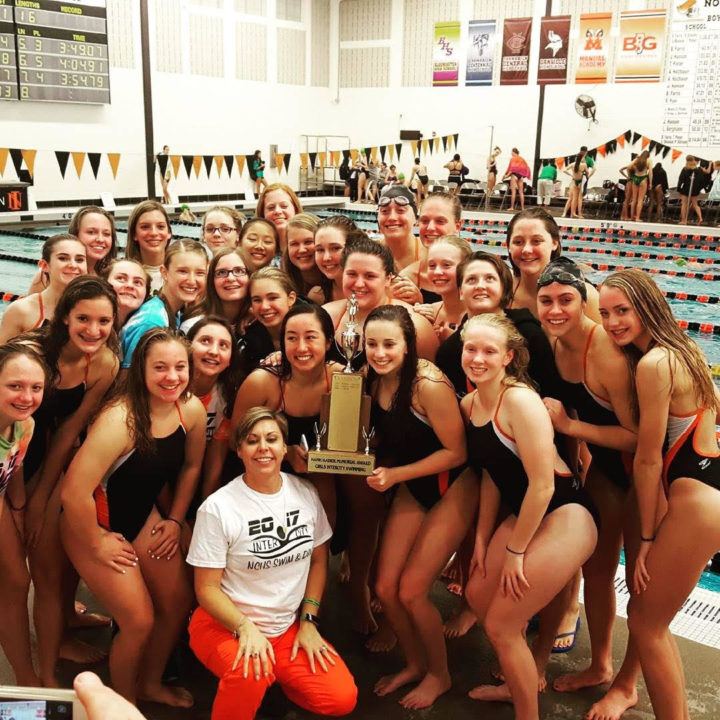 Illinois' downstate girls are prepared to operate on the IHSA record book this weekend. Current photo via Twitter @CoachBudak

The Illinois High School Association is hosting its girls state meet on Friday and Saturday, November 17-18th. Diving prelims start Friday at 9:00am and semifinals follow immediately after, while swimming prelims start at 3:30pm on Friday. The finals session for both swimming and diving starts at 1:00pm on Saturday.

Special note for IHSA State Meets: Although New Trier is an 8-lane pool, IHSA runs its state meets with a 6-person “Championship Final” and a 6-person “Consolation Final”, so only the top 12 in each event on Friday advance to finals on Saturday.

Rosary has won the last 2 team titles, and is in the hunt for the 3-peat this year. However, they notably lost Alexis Yager to graduation last year. Yager contributed a 2nd place finish in the 200 IM, a 3rd place finish in the 100 breast, and helped the 200 and 400 free relays to 1st place finishes. Regardless, Rosary still remains to be the team to beat, hanging on to 2016 100 fly champ, Camryn Streid, and other 2016 scoring performers, Athena Ye, Anne Tavierne, Sydney VanOvermeiren, Emily Ryan, and Linda Licari.

When scoring out the psych sheet, Neuqua Valley comes in 2nd, largely due to strong sectionals relay performances and having 2 divers ranked in the top 6. If they can duplicate their relay swims from last weekend, they have the potential to win the team title

Normal Community, despite only having a state team roster of 5 swimmers, is coming into the meet in the strongest team position a downstate (Not in the Chicago area) girls team has ever had. The addition of National Junior Team member Grace Ariola, who decided in her Senior year to swim high school for the first time, has propelled Normal Community to pool records in both individual and relay events almost everywhere they’ve gone this season. Ariola is seeded 1st in the 50 free (22.90) and 100 back (55.19). She is joined by teammates Julia Heimstead, Julia Oostman, Claire Koh, and Ashley Bengtson, all of whom swim for BNY WAVES year-round. Community is seeded 5th in the 200 medley and 2nd in the 400 free relays, with the potential to win both events.

Although high school swimming in downstate Illinois has always had it’s share of fast swimmers, there has never  been enough of a concentration in one high school for the team to make a run at the state title, until this year. When asked about her outlook on the team going into the meet, head coach Heather Budak stated, “I am so excited with the outcome of our sectional swims.  The girls are super excited for the weekend.  They have worked hard all year and are very excited for Ashley and Grace to experience the State meet”.

Races to watch out for:

The 200 free has shaped up to be possibly the most intense individual race of the meet, with the defending champ, state record holder, and Ohio State recruit, Georgia White, going up against the Illinois Swimming LSC open age group record holder and Duke recruit, Melissa Pish, in her IHSA debut. Pish, another downstate athlete who swims high school for Normal Community West and club for BNY WAVES, comes in with the faster best time, 1:46.08. There are a few wildcards to watch out for in the race as well, including top seed Iza Pelka, Macy Rink, Audrey Guyett, and Anne Tavierne.

The 200 IM is set to feauture what will likely turn out to be the biggest rivalry of the weekend: Ema Rajic (Cal recruit) vs Noelle Peplowski (Indiana University recruit).  The pair of downstate swimmers will also face off in the 100 breast.  Rajic (Urbana University High), the defending champ and IHSA record-holder, is seeded 1st with a 2:01.94, and Peplowski (Metamora) is 2nd with a 2:02.70. Rajic’s best time is her 2:00.27 IHSA record, which is the only time she swam the 200 IM at a USA Sanctioned meet last season. She swims club for Champaign County YMCA. Peplowski’s best time is 2:01.53, which she set back in March of this year. Peplowski also swims club for BNY WAVES. Both girls are breaststroke specialists who swim the IM similarly, making the race that much more interesting. 2016 A finalists Annika Wagner, Valerie Tazari (Auburn recruit), and Mari Kraus are all returning as well, so the girls in the 200 IM have their work cut out for them.

Grace Ariola (Texas recruit) should have a good handle on this event, but where it gets interesting is whether or not she’ll be able to take down a fast record by Olympic Gold Medalist Olivia Smoliga. Ariola’s best time in the 50 is 22.20, which puts her within range to be able to take the record, especially when considering she went 24.8 in the LCM 50 this Summer to win Silver at the FINA World Junior Championships. She is seeded first with a 22.90, which she went in a regular suit at Sectionals last weekend. Grace Cooper is seeded 2nd with a 22.91, which was a best time for her by about half a second.

On the psych sheet, the 100 fly looks like the tightest race, with no clear favorite. Dunlap High School star and Northwestern recruit, Emma Theobald, is seeded first with a 55.32, just a little off her personal best of 54.95. Emma Gleason of Libertyville High School has the #2 seed with a personal best of 55.55. Defending champ, Camryn Streid (Cincinnati recruit), is seeded 21st with a time of 56.95, which is about what she went at sectionals last year. She won with a 55.39 last year. However, Sophomores Lindsey Merk (Lockport) and Julia Heimstead (Normal Community) enter the meet with the fastest best times in the 100 fly, at 54.57 and 54.59 respectively. Merk, who swims club for Academy Bullets, went her 54.57 best time in March of 2016, and placed 3rd in the event last year with a 55.56. Heimstead, who swims club for BNY WAVES, placed 10th in the event last year with a 56.67, and went her personal best of 54.59 in March of this year.

This event also looks like it’s Grace Ariola‘s for the taking. She is seeded 1st with a 55.19, a little bit in front of 2nd seed Ashley Carollo (55.41). Ariola has a season best time of 54.27 and a personal best time of 53.04, set last December. Last year’s runner-up Emma Theobald, and 3rd place finisher, Shannon Kearney are in the mix as well.

There appears to be 3 teams with the potential to take down the IHSA record in this event: Normal Community, Rosary, and Oswego. Being the last event adds to the hype of this event, since it’s entirely possible the 400 free relay could decide the team champion. Rosary went 3:25.25 to win last year, just .75 seconds off the record. They lost their fastest split, Alexis Yager (50.65), but it’s possible that loss can be made up for since all their girls have pretty similar 100 free times. Oswego has Georgia White, who is a 49.9 100 freestyler, and Grace Cooper, who is 51.07 flat start, so it’s not out of the picture that they could take the event, break the record, or both. Normal Community has Grace Ariola, whose best time is 48.97, and she led off the relay at sectionals in 49.91 in a regular suit. They also have Julia Heimstead, who split 51.91 in a regular suit last weekend, and Ashley Bengtson, who qualified for the 100 free with a 52.68.

Sadly, i’m almost 100% sure relay lead-offs can’t count as records in IHSA, either as a pool or state record. It would still be able to count as a personal best time, but I believe in IHSA a record has to be swum in the individual event.

Ema Rajic is winning both events. Completely dominat and amazing competitor. Crushed both noelle and Valerie over the summer. Should be interesting to see what her times are!

While swimming at the Y tonight, I saw Rajic and her teammates doing their final workout before tomorrow’s prelims. Ema looked like she’s ready for a monsterous weekend 😉

I think you forgot to mention another dark horse in the 200 free: freshman sensation Kate Morris from the Glenbard Co-op.

Very true. It should be an interesting race considering it may be the first time ever it takes a sub 1:50 to make the championship final.