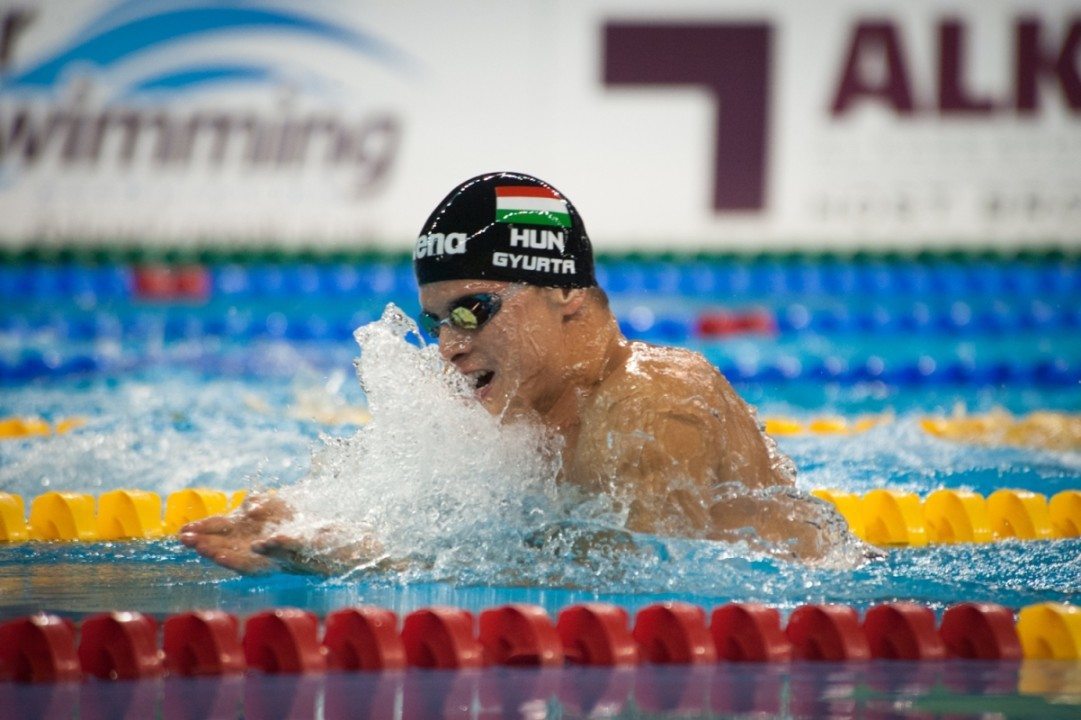 Daniel Gyurta jumped into the World Record game, earning a $10,000 bonus alongside his countrywoman Katinka Hosszu. The two now lead all money-earners on the World Cup circuit this year. Archive photo via FINA

There were two World Records set on day 1 of the Dubai World Cup meet, which for those counting money, means two $10,000 bonuses. They both went to Hungarians, with Katinka Hosszu setting her fourth World Record of the series and Daniel Gyurta jumping into the cash pile as well.

Those two now lead the overall series money-earners easily, thanks to those bonuses. Hosszu has racked up $58,500 in just three days – a meet and a half – of swimming. Always a pioneer in proving that swimming can be lucrative for those good enough to win multiple events and break world records at will, Hosszu leads all females by nearly $50,000 this season.

Second is Inge Dekker of the Netherlands, who won her fifth and sixth events of the series today in Dubai. Dekker has yet to hit it big on one of those World Record bonuses, but is still carving out a nice paycheck for herself with five and a half World Cup meets yet to go.

Gyurta now leads the men, leapfrogging former leader Thomas Fraser-Holmes. Gyurta broke his own nearly-five-year-old world record in the 200 breast, pushing close to the first sub-two-minute short course meter 200 breast in history. That boosted him from his $3,000 Doha total to $14,500 for the series.

Fraser-Holmes is now second after winning two more races. He won four in Doha and is on pace to match that total in Dubai, and has bankrolled $9,000 on the circuit so far.

The Dubai World Cup continues tomorrow with 9 more women’s events and 8 more for the men.

All figures are in American Dollars.