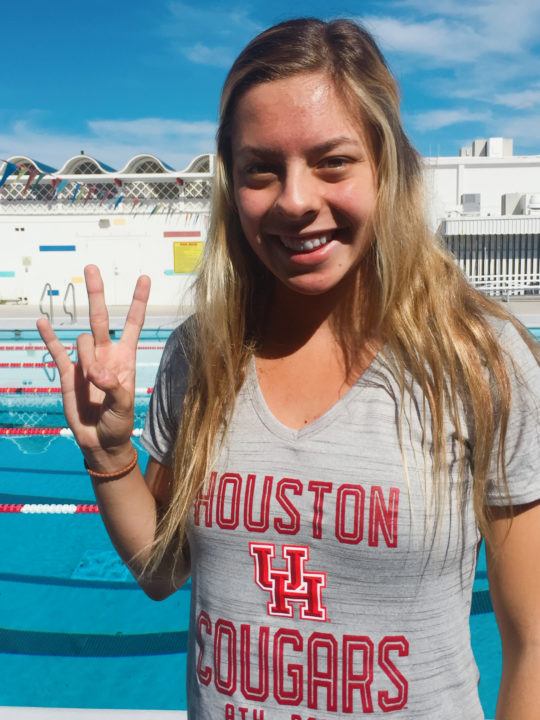 Boulder City, Nevada’s Montana Lloyd has verbally committed to swim for the University of Houston beginning with the 2017-18 season. Current photo via Montana Lloyd

Boulder City, Nevada’s Montana Lloyd has verbally committed to swim for the University of Houston beginning with the 2017-18 season.

“I fell in love with the school as soon as I stepped onto the campus. The atmosphere of the team is something that is going to be really special to apart of. UH has everything I need to better further my swimming career and to help set up my life for the near future. I cannot wait to be a part of the Cougar family! GO COOGS!” [sic]

Swimming for her club team, Desert Storm Swimming, Lloyd has achieved Summer Juniors cuts in the 200m back and 200y back, and her top times include:

Lloyd will be an immediate-impact player for Houston. She would have been an A-finalist in the 200 back at the 2016 AAC Championships, scoring behind the Cougars’ 2015-16 freshmen sensations Eleanna Koutsouveli and Jenny Penneck. She also would have been a point-getter in the B finals of the 100 back and the 200 IM. The latter would have been particularly helpful as the Cougars did not score any points in that event. Lloyd will join fellow-commit Mykenzie Leehy in the Houston class of 2021.