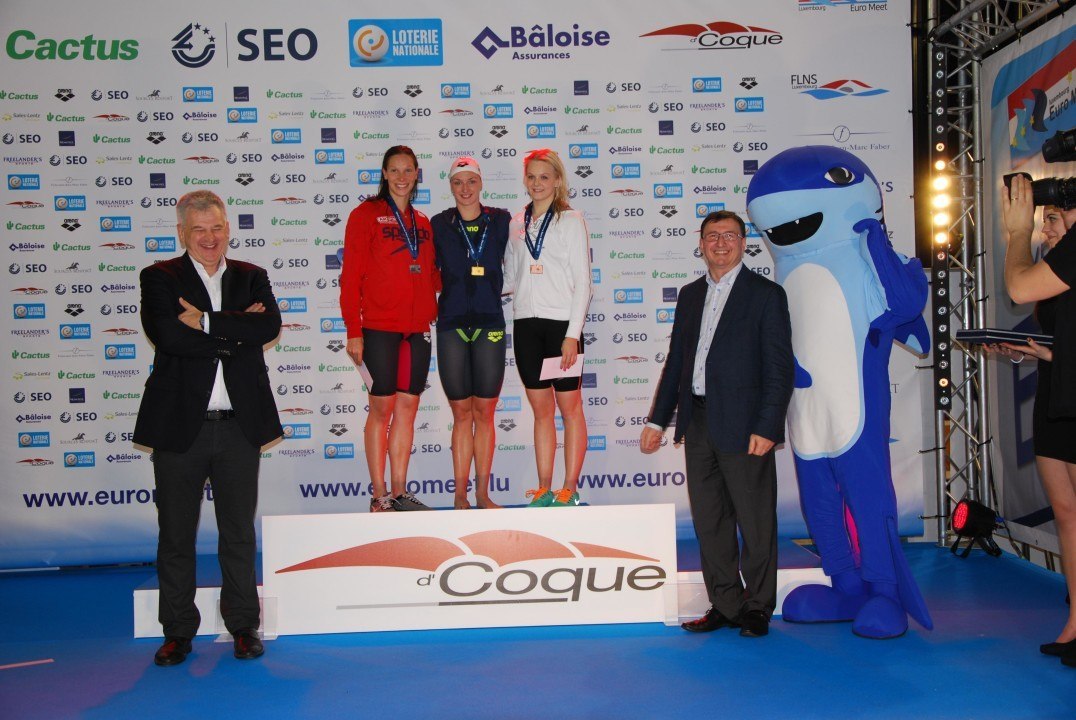 Very few Meet Records survived Saturday’s session. German Marco Koch performed very fast in the 200 m breaststroke, he was faster than in Kazan at the World Championships – his 2:07,69 are a new 2015/2016 world best time, in Kazan he went 2:07,76 for the title. Marco said that he likes to swim in Luxembourg and felt very well in the pool and at the meet. One of his strengths is his turn and his impressive underwater – he said that normally his springiness isn’t very good so he thinks it is more his ability to glide after the turn underwater. He plans to continue his career after Rio and he doesn’t feel much pressure – he added that there are other guys like Daniel Guyrta who are very fast and he thinks, on the special day in Rio there will be many things which will decide the 200 m breaststroke race. He seems very relaxed – even if he just returned from a training camp in Tenerife and also swam at the Golden Tour, he wants to swim all meets of this tour.

Laszlo Cseh sets two new meet records, in the 200 IM and in the 200 m butterfly. He isn’t shaved at the moment and said that “if it gets serious you will see me shaved” – he never swims with a cap and normally at all important meets he has a bald head.

Serbia’s Velimir Stjepanovic,who lives and trains in Dubai at the moment, thinks “that he is now on the right track in the Olypmic  year”. Stjepynovic is the 2014 European Champion in the 200 m and 400 m freestyle but 2015 wasn’t his best year – but his meet record with a time of 1:46,10 is a very good start into the Olympic season and he is now under the ten fastest swimmers in the actual world ranking.

Germany’s Franziska Hentke also set a new meet record in the 200 m butterfly and she was very satisfied with her swim because she did her dryland training in artificial height for some weeks at the University in Magdeburg, her hometown, and just finished it.

13 meet records have been improved today – and probably more to come tomorrow!

Times by Cseh are not mentioned.
Nice 1.56.58 in the 200 fly.
Dear swimswam, I again ask you to mention simply for each event the first 3 names with their times in all your recaps.
Men’s 200 fly
1.
2.
3.
And then your remarks.
Women’s 200 fly
1.
2.
3.
And then your remarks.
It would be so cool for the readers to have the main results at first glance without being forced to use the live results’ link.
Thanks.

Thanks for the hint but the Intention of my report wasn’t a full recap, more a summary with some background Information because my colleagues mentioned all results in the live recap. But I can link our full recap in the future!

That 200 breast WR is ripe for the picking! So many swimmers within 1 second of it – and Marco Koch in January! Kind of baffling that it is still Akihiro Yamaguchi from a high school meet!