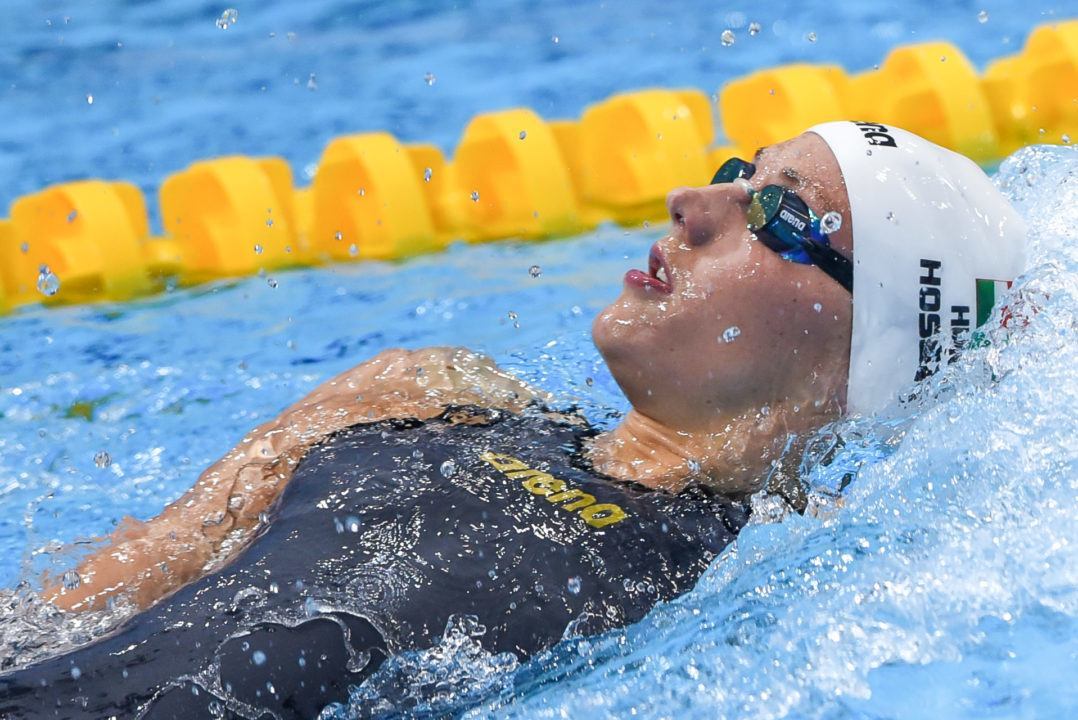 Hungarian Katinka Hosszu exercised her #IronLady powers by stepping onto the blocks 11 times on the final night at the Bergen Swim Festival. Archive photo via Peter Sukenik/www.petersukenik.com

The two damage-producing swimmers from abroad that are Hungary’s Katinka Hosszu and Japan’s Kosuke Hagino were back at it again on the final day of the 2016 Bergen Swim Festival.

As a refresher, Hosszu notched 5 wins on the first night of finals, following that up with a remarkable 12 on-the-block appearances last night to add to her Bergen hardware collection. For his part, Hagino nabbed two gold medals last night in the men’s 200m backstroke and 200m freestyle and made anther 2 appearances tonight to leave his mark on this meet.

Immediately after her trio of efforts in breaststroke, Hosszu shifted gears to top the women’s 400m freestyle field, winning gold in that mid-distance race in a time of 4:15.26. Then, the 27-year-old #IronLady moved on to one of her specialty events, the women’s 200m IM, the race in which she is the reigning world record holder. 2:12.58 is what Hosszu earned for her 2nd victory of the night.

But, Hosszu still wasn’t close to being done, competing in both the women’s 50m backstroke knock-out event, 100m butterfly, 200m breaststroke and 100m freestyle. Although far from her best across these additional events, the fact that, for the 2nd night in a row, Hosszu stepped onto the block more than 10 times on each night is enough to earn a medal in itself.

Hagino demonstrated the magnitude of his talent by winning the 200m breaststroke and 100m butterfly events tonight. Both are not on his Olympic schedule, which includes the 200m IM, 400 IM and 200 freestyle events, speaking again to the multi-dimensional strength this young talent possesses. 2:13.81 is what it took Hagino to easily win the men’s 200m breaststroke, while he raced his way to the top of the 100 butterfly podium in a time of 52.85. Hagino is considered a strong podium contender across the 3 events he’ll be contesting in Rio.

The home crowd did get to cheer for recent European Championships silver medalist Henrik Christiansen as he soared ahead of the competition in his signature men’s 400m freestyle. Christiansen clocked a time of 3:49.11 to win the event by almost 8 full seconds tonight. The man currently sits as the 8th fastest in the world rankings with his time of 3:46.37 he earned at the Stockholm Open, while 3:46.49 is what he clocked in London to earn the aforementioned silver.

This is not normal. Hopefully she will not burn herself out through these constant stresses.

You are entirely correct: It is not normal

Maybe the parameter by which her swims should be judged is not “normal” vs. “not normal”. Maybe the correct parameter is “common” vs. “uncommon”. And we’ll further define it to say that standard by which we determine whether or not they are “common” is elite level international swimming.

Based on those parameter, her swims are – I think we can all agree – exceptionally uncommon. Nobody has ever – either gender, in the history of the sport – put up the kind up times, across seemingly every event, that she has. Nobody has ever made the kind of improvements that she has at the age that she is. Nobody has swam a schedule like she has before. Her performances may… Read more »

This was an amazing competition weekend. Hosszu is SO tough, inside and out. The 50s were elimination rounds and the way she handled them was stunning, just hammer time. All business.

Finals were exceptional performances from many swimmers, meet records dropping all over the place. Well done Bergen!

Maybe Hosszu should try to swim every event in Rio and see how she does.

Rio is the real deal. Hosszú has to put max effort into all of her races, and has to think quality rather than quantity there.

Yeah, I know. She’ll probably cut back to like 8 swims a day instead of 11 or 12. No, but in all seriousness she’s an amazing all around swimmer and is really, really good at racing so many times in one day. Not many people can do what she does.

Iron Lady pb makes top 10 in the world during prelims in a completely untapered meet IN AN OFF EVENT! Unreal. (Referring to 4:04 400 free)

According to her Facebook, Hosszu went a PB in the 400m freestyle in the prelims session with a 4:04.9.