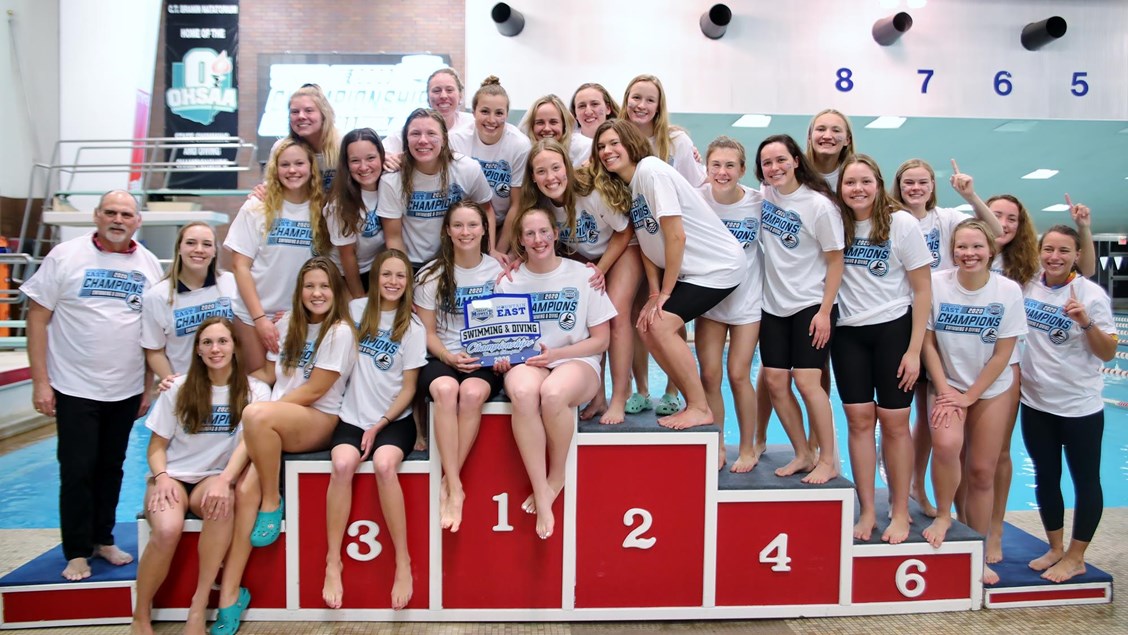 Hillsdale led the 13-team standings at the end of all four days, holding off the runner-up Oilers by less than 100 points on Wednesday and Thursday. The final push from Findlay fell just short in the end with the Oilers ending with 1,583.5 points.

The Chargers earned four different event victories for a grand total of 1,691 points. It was a complete team effort as the Chargers halted an attempt for three straight combined meet titles by Findlay.

They did it by qualifying waves of swimmers from the prelims to the finals, sometimes putting four or five in the final heat that were guaranteed to score points. They did it by winning events, a total of four, including a 200 backstroke win from Katherine Heeres on Saturday.

Hillsdale also had the top first-year swimmer in the water and head coach Kurt Kirner inspired a memorable celebration on the deck by diving into the water followed by a procession of his swimmers.

Malone finished strong with a victory in the 400 freestyle relay and Denise Quentin logged a “B” cut time with a win in the 100 freestyle. Quentin is top 10 once again in the combined conference record books with a 51.70 in the finals.

The Pioneers, serving as host for the third straight year, finished third in the team standings with 836 points.

A large number of senior student-athletes from both conferences were paraded out on the bridge at the C.T. Branin Natatorium to start Saturday’s festivities. The seniors were greeted by their coaches with various gifts as some competed in their final collegiate competition.

Individual awards were also voted upon by both league’s coaches. After a two-year run by Fairmont State’s Courtney Deem as the top swimmer, Findlay’s Hanna Cederholm dominated for her turn as G-MAC/MEC Women’s Swimmer of the Meet.

The G-MAC/MEC Freshman of the Meet was Hillsdale’s Leah Tunney. Tunney was responsible for 114 points alone as she broke the overall and meet record in the 500 freestyle and helped HC win the 800 freestyle relay.

The G-MAC/MEC Coach of the Year award was presented to Kirner for the second consecutive year. Even with the graduation of senior All-American Anika Ellingson, Kirner and his staff reloaded with a very talented incoming class that made major contributions to the championship run.

From Madison Pyhel, Sarah Clark, Madeline Breay, Anika Fassett, Marie Taylor, Tunney and others, many first-year student-athletes performed at a high level in their first championship experience. Senior Victoria Addis is officially a two-sport champion after helping the Hillsdale softball program to a pair of conference tournament titles in 2018 and 2019.

Following that theme, Tiffin’s Lydia Deprey was named the G-MAC/MEC Diver of the Meet after winning the 3-meter height earlier in thee week. Deprey will be taking her skillset to the Dragons’ top-10 ranked women’s track and field program in the pole vault.

A total of seven different meet records were broken by the women this year.

Separate all-conference recognition will be awarded by both the Great Midwest and Mountain East in respective press releases.

CANTON, Ohio – An impressive four-day showing with over 1,500 points helped Findlay sustain and continue a dominant three-year run as winners of the Great Midwest/Mountain East Men’s Swimming & Diving Championship that ended on Saturday

The Oilers led the nine-team standings at the end of all four days, putting 471 points of cushion for the margin between runner-up Tiffin.

A total of 12 meet records were broken by the men’s swimmers and divers at the C.T. Branin Natatorium. Findlay had a major share of those, including five individual and more different relays meet standards broken.

A large number of senior student-athletes from both conferences were paraded out on the bridge at the C.T. Branin Natatorium to start Saturday’s festivities. The seniors were greeted by their coaches with various gifts as some competed in their final collegiate competition.

One of those seniors making a memorable last stand in his home pool was Malone’s Nick Wertz, who touched the wall first in the 1,650 freestyle.

The Oilers have the perfect blend of championship experience and youth. Seniors Trent Williams and the Stretch brothers, Adam and Isaac, have been very successful as UF won the inaugural meet in 2018 and making it back-to-back in 2019.

Sophomore Paul Pavala stole the show in the 200 backstroke with an overall conference and new meet record. A talent-laden freshman class had five names that accounted for tons of points.

Individual awards were also voted upon by both league’s coaches. Findlay’s Tim Stollings was worth the price of admission as he put the finishing touches for a simply remarkable week in the water with six different wins.

Stollings was named the G-MAC/MEC Swimmer and Freshman of the Meet, duplicating what Tiffin’s Miguel Angel Garcia Arroyo was able to do in 2019.

Stollings broke meet records in the 50 freestyle, 100 backstroke, and 100 butterfly. Two of those events were also overall combined conference records and he was the first swimmer in championship history to set an actual pool record in the 100 butterfly.

Stollings now ranks first in Division II in the 100 butterfly as he met an NCAA “A” cut time in the finals. He also won the 100 freestyle and contributed to new meet and overall records for the leagues in the 400 freestyle relay and 400 medley relay.

After breaking overall conference and meet records in both the 1 and 3-meter heights, Tiffin’s junior Jordan Wright was named the G-MAC/MEC Diver of the Meet. Wright broke the conference record previously held by Nickolas Jefferson, another Tiffin diver. He has also been named a two-time conference athlete of the week in 2019-20.

Tiffin’s Lucas Jachno was named the G-MAC/MEC Coach of the Year by his peers for the second straight season. Eight different event victories went to the Dragons, including the 800 freestyle relay with his stars Garcia Arroyo, Christoph Hohenfeld (1,000 freestyle winner), Jonah Sumfleth (200 freestyle winner) and Nick De Robles.

Separate all-conference recognition will be awarded by both the Great Midwest and Mountain East in respective press releases.