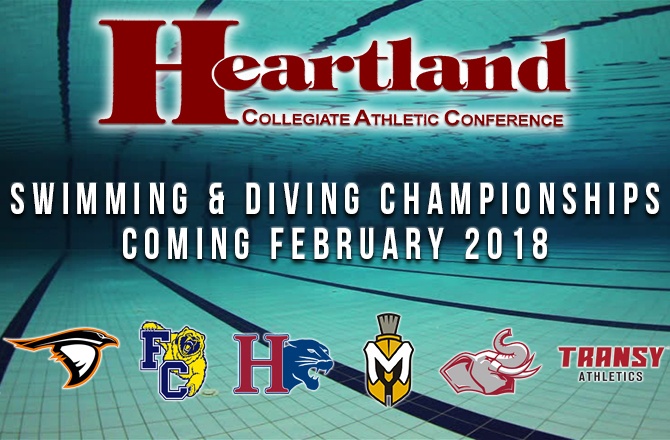 Commissioner Ragsdale stated, “The Heartland Collegiate Athletic Conference takes great pride in providing a broad based program for its membership. We achieve this by maximizing the number and variety of sports championship offerings in both team and individual sports. Consequently, I am thrilled that beginning this year we will expand our championship program to include sports of swimming and diving for both men and women.”

Rose-Hulman Institute of Technology head coach Keith Crawford mentioned, “Rose-Hulman is excited that the Heartland Collegiate Athletic Conference will sponsor a swimming and diving championship this year.  This move helps us join the other 18 Fightin’ Engineer teams in competing for an HCAC championship.  The HCAC has been competitive in swimming, with our teams combining for seven conference championships in other leagues since 2014.  Individuals from three different HCAC programs have recently competed at the NCAA Championships.  This move will help showcase how strong swimming and diving truly is in the HCAC.”

Hanover College will be joining the five current members in the 2018-19 season as the sixth institution in the HCAC to offer swimming as a varsity sport.

Hanover’s head swimming coach Blake Braden said, “I am excited with the addition of swimming and diving to the HCAC as well as Hanover joining the HCAC in swimming.  This will bring another strong program into an already competitive conference.  With the programs that have already implemented swimming and diving this will help the conference support grow both academically and athletically as well as help bring strong student-athletes into the conference.”

In the Heartland Collegiate Athletic Conference Constitution & Bylaws, it states “a sport shall be considered a Conference sport if more than half the member institutions sponsor an NCAA Division III team at the beginning of the season.” Therefore, a proposal for a waiver year (2017-18) was passed by the HCAC’s Athletic Director’s and Council of President’s this past academic year.

“We are extremely excited for this addition of swimming and diving as a conference championship sport by the HCAC. These two sports have been growing in the conference with Manchester, Anderson, and Hanover being the most recent schools to start programs. By uniting the schools under one banner we are giving the sport a home here in the Heartland which will undoubtedly bring in more student-athletes and create a competitive environment as we strive for athletic excellence while pursuing academic success. This was only made possible by an incredible collaborative effort from all the swimming coaches in the HCAC, the tireless work of Commissioner Ragsdale and Sara Landis, and the Athletic Directors of the conference being willing to give our student-athletes the best experience we can offer,” added Anderson’s head coach, Conner Snare.

Other Remarks from Coaches:

“The advent of swimming and diving as a recognized sport in the HCAC is historical for all of the programs involved.  While we face several challenges in terms of a championship product, each institution is represented by phenomenal coaches who have a passion for what they do and a commitment to offering their swimmers and divers the best experience possible.  At Franklin, we look forward to growing with the other teams and the conference administration to promote this endeavor,” said Andrew Hendricks, head swimming and diving coach at Franklin.

Mike Kroll, head coach at Manchester, “The addition of Swimming and Diving by the Heartland Collegiate Athletic Conference as a conference sport is an exciting milestone that Manchester University is proud to be a part of. Swimming and Diving has a rich tradition in the state of Indiana, and this addition provides greater opportunities for athletes to pursue their passions at the Division III level.”

Transylvania University head coach, Dave Doolin, “I’m excited about my first year at Transylvania coinciding with the start of the HCAC Swimming & Diving Championships.  It’s going to be a great year!”