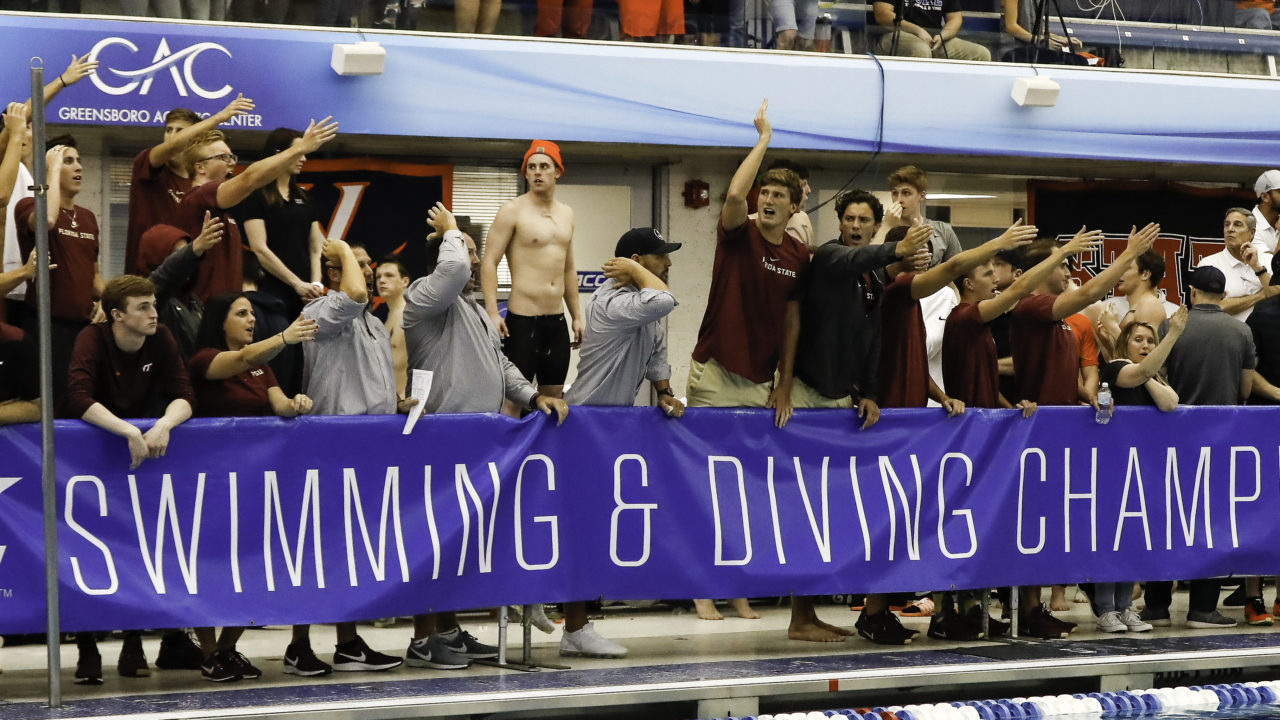 On their senior day, the FSU Seminoles raced to a 188-90 victory on the men's side and a 226-48 win on the women's side over the Gardner-Webb Bulldogs. Archive photo via Jeremy Esbrand / Florida State Athletics

The Gardner-Webb Bulldogs traveled to Tallahassee on Saturday to take on Florida State University Seminoles in their first competition of the new year. This was the Seminoles’ second meet of 2021, following their women’s tie and men’s victory against LSU last Friday.

Florida State was without a number of key swimmers in the meet, including sophomore Peter Varjasi, junior Max McCusker, sophomore Domen Demsar, and Noah Young. Varjasi is the team’s top swimmer this season in the 100 free (42.91), McCusker is their #2 (43.57), and Demsar is their #5 (44.56).

The women’s team was more complete, though they were without junior sprinter Kertu Alnek.

Italian Junior record-holder and FSU sophomore Tania Quaglieri touched the wall 1st in the 100 back at 56.60. That gave her a win by a second over her senior teammate Madeline Cohen, who touched 2nd. Quaglieri’s best time still stands at 53.03 from her 11th place finish at last year’s Georgia Tech Invite.

The Bulldogs secured significant points when senior Mary Traylor claimed 1st place in the 200 fly  (2:06.46). That was the only win of the day for the Gardner-Webb women.

Senior ‘Nole Rebecca Moynihan took 1st in the 100 free (51.46) with a one-second lead over her first-year teammate Zsofia Kurdi who finished 2nd.

Junior Katherine Baker won the 200 breast with a substantial lead of 6 seconds, touching the wall at 2:18.43.

The 50 free was a tight race between Kurdi, Quaglieri, and Banks as they touched the wall within .30 of each other. Kurdi got her hand on the wall 1st with a time of 24.01.

This speed transferred to FSU’s  200 free relay, led to victory by Jenny Halden, Quaglieri, Womer, and Kurdi in a time of 1:36.03. Moynihan led off the 2nd place relay with the fastest split in the field (23.32).

The Seminoles kicked off the meet by winning the 200 medley relay (1:32.21) after a close race with Gardner-Webb’s ‘A’ relay. Despite the fact that FCU finished 1st with a one-second lead, Gardner-Webb’s leadoff leg swam by junior Brady Fields (23.50) was .68 faster than FSU’s Jackson Lucas.

Not long after he anchored the winning 200 medley relay in 20.31, freshman ‘Nole Mason Herbert snagged 1st in the 200 free with a time of 1:41.17. Herbert out-touched his freshman teammate David Quirie by less than a second in the 200.

FSU secured more points when Herbet touched 1st in the 100 free (45.62) ahead of junior teammate Kuba Ksiazek. Rounding out a day of freestyle sprints, Herbert teamed up with Ksiazek, Quirie, and senior Paxton Rhoads on the winning FSU 200 free relay (1:24.24). Herbet split the fastest 50 free in the field  (20.13), and only Rush Clark on the FSU ‘B’ relay was able to join him under the 21-second mark.

Seminole freshmen swept the 200 fly, taking 1st through 3rd place. This trio was led by Tommy Eaton who finished with a time of 1:50.30. Almost exactly 1 second later, Clark touched the wall, followed by Zachary Smith. Eaton posted his lifetime best, 1:45.93, in November at the UGA Invite.

Nick Vance, an FSU sophomore, won the 200 breast 2:04.38, ahead of junior Jonathan Frye who secured 2nd place for Gardner-Webb after placing 3rd in the 100 breast earlier.

With only the 500 freestyle heats in between his races, Vance claimed another victory for FSU by shaving .18 off his previous lifetime best 100 fly from 2019  for a time of 49.38.

That was the GWU men’s team’s only win of the day.