Gyurta rockets to World Cup points lead, Hosszu extends her lead to over 150 after Dubai day 1 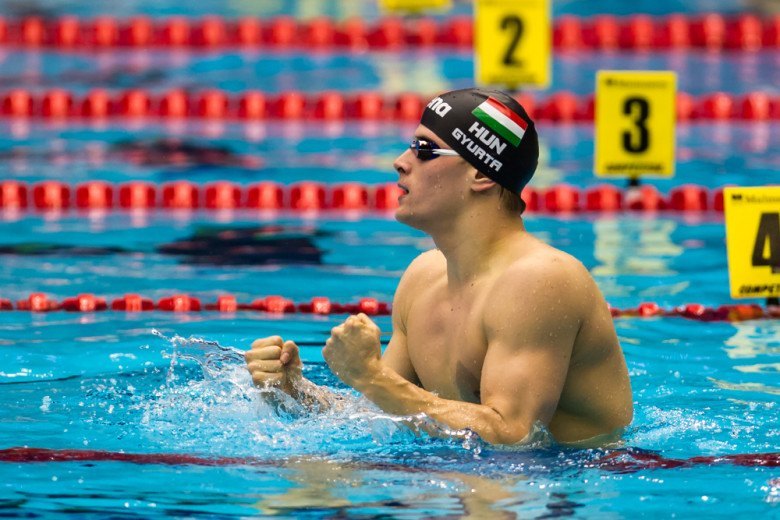 It was a great day for the Hungarians at the Dubai World Cup Sunday, with Daniel Gyurta and Katinka Hosszu each setting a world record and riding that wave to the top of both the money-earners lists and the series points standings. Archive photo via Jesper Nielsen, www.sttfoto.dk

It was a great day for the Hungarians at the Dubai World Cup Sunday, with Daniel Gyurta and Katinka Hosszu each setting a world record and riding that wave to the top of both the money-earners lists and the series points standings.

A world record yields 20 bonus points in the series standings, which was enough to give Gyurta a slim, two-point lead over defending series champ Chad le Clos. Gyurta milked 32 points out of just one event, winning the 200 breast and breaking his own world record for the bonus. He now has 80 points. Le Clos, who won twice today, sits at 78.

Keep in mind that the Dubai World Cup is the conclusion of the tour’s first cluster, with monetary bonuses given out for the top finishers in each cluster. So if Gyurta can hold his lead for one more day, he’ll get the first-place bonus instead of Le Clos. The top 6 in any given cluster earn bonuses.

Hosszu, meanwhile, continues to extend her lead. She put up a meet-high 68 points on day 1 in Dubai, including a world record in the 200 IM, breaking the mark she already set in Doha. That one event has now provided Hosszu 40 bonus points in world records, and she has the 100 and 400 IMs tomorrow, events where she also broke world records in Doha.

Inge Dekker continues to run second in the points. The Dutch sprinter won twice today, bringing her total to 84 behind Hosszu’s 257.

When the meet wraps up tomorrow, the top 3 individual swims in terms of FINA points will earn performance bonuses. Hosszu seems on track to earn the 24-point first-place bonus for women. Second earns 18 and third 12. Those points (plus the points from medaling in tomorrow’s events) will cap off the first cluster points standings as the series takes a few weeks off before resuming with cluster #2.

Will there be race videos of Hosszu’s im and Gyurta’s Breaststroke records soon? @Jared Anderson

hswimmer – FINA has posted race videos on its website; unfortunately, they’re only available in certain countries, and I haven’t been able to view any of them. We’ve got a story publishing in the next few minutes with links, so others can see if it’ll work in their countries. Here’s a sneak preview with Gyurta’s 200 breast record swim: http://livemanager.eurovision.edgesuite.net/fina/site/index.html?video_id=17744