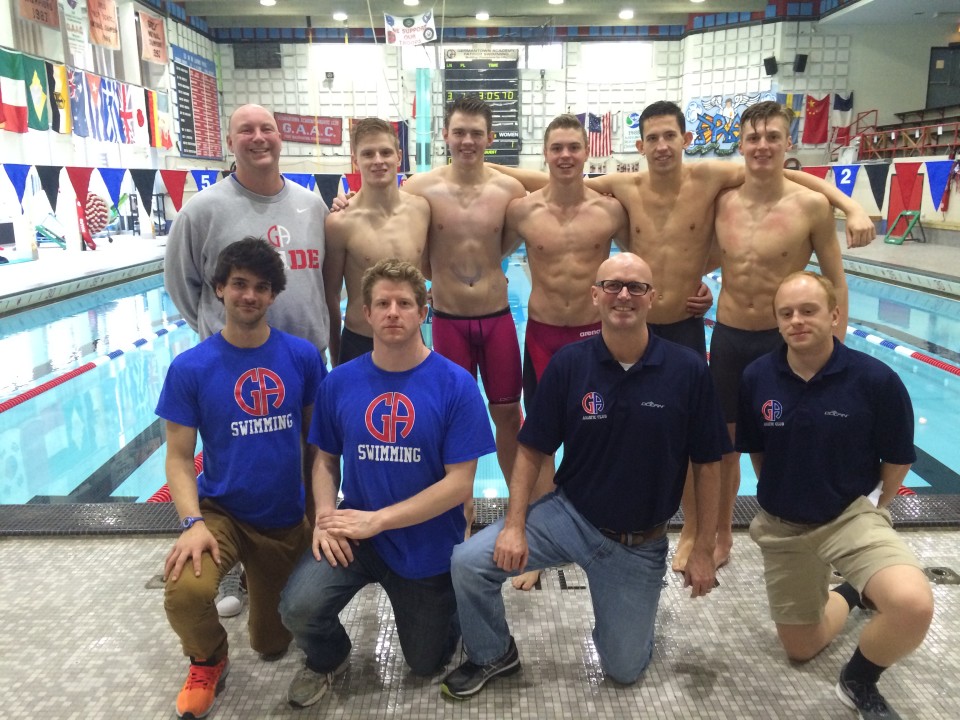 For the second year in a row, Ryan Torie was on a record setting pace for Germantown

The swimmers and coaches from Germantown Academy Aquatic Club took to the water this past Sunday for an intrasquad competition. Despite the fact that many of the swimmers were coming off a hard weekend of racing at Easterns, they still managed to set four pool records.

All the pool records were set in the course of two relays, 200 and 400 freestyle. Ryan Torie, who won both the 50 and 100 freestyle at Easterns, led off both relays in pool record time. In the 50 leadoff he notched a 20.46, just slightly slower than his weekend winning time.

In the 100, however, he was able to better his performance. Torie swam 44.40, which is his first recorded swim under 45 seconds in that event. On the 200 freestyle relay he was joined by Tommy Whitman, Brien Collier and Greg Callahan. The foursome swam more than one and a half seconds faster than the previous record at 1:25.24.

On the 400 freestyle relay, Torie joined Collier, Callahan and Chris Hayburn to record a 3:05.70. That time broke the existing record by nearly four seconds. Both relays were significantly faster than the corresponding high school team recorded in the past weekend. This because while Torie swims for the GAAC, the Germantown Academy Aquatic club, he attends Springside Chestnut Hill Academy.

Torie is no stranger to the Germantown pool record board, having already begun by taking down a legendary record last year.

Torie will continue swimming next year for the University of North Carolina.

Time Trialed …cough cough…got an OT Cut at Time Trials…Then Scratched out of that one event, (of the 2 events He was entered in) but was actually seeded 1st in…cough cough… Scratched out of Finals in The only other event because it was most likely that he was not going to get the 2 second drop for that 100 Free OT Cut. Back now to the main point of this SwimSwam story- does anyone see a pattern? The GA pool records that this story touts was done at a closed meet – without competition. The OT Cut was done during time trials, not during competition of actual Sectionals. The 23.19 is a great time- congratulations- and I mean that. But… Read more »

Swim people are crazy!!!-you gotta love it. The only people that are crazier are the administrators at GA for spending all this money on a swim program that stinks. Congrats to Torie on the trial cut-but Kate and Geoff at UDAC get the credit for that one.

How does the school justify all those salaries and benefits for the coaching staff and the program with such little revenue coming in. How can they justify such HUGE loses for a sports program and a losing program on top of that! GAAC is now a HUGE financial drain on the school and should be cut off-an aquatic club is not a necessity- no other sport or activity in the school has a… Read more »

Thompson coached Evan Austin who was in the 2012 London Para Olympic games. If you need reference look him up on USA swimming page for Team USA.
You may want to research a little better before stating inaccurate comments.

GAAC swimming has been on spring break which should result in empty lanes as kids deserve time off but stop by this week or pop in from down the hall and you can take attendance and maybe touch base with Thompson to report real facts.

Ryan Torie got an Olympic trial cut this weekend so congrats to Ryan, Thompson and staff .

Para Olympics does not exist. And the Olympic ring tattoo does not represent the Paralympics.

As I predicted back in February, the age group exodus continues. The lanes are all but empty. Great work Indiana Jeff.

Perhaps, in a few years, old and new alumni will look back at the Thompson era, scratch our collective heads and wonder how and why tall his decisiveness happened. Perhaps the new GA administration and the next coach will recognize there is value in the rich history of GA swimming. Perhaps swimming alumni will be welcomed back on campus. Wouldn’t that be amazing?

No worries this program is far from needing any type of medical help or resuscitating it. I am glad you are able to finally see the importance that Brush and Thompson hold in the new GA swimming program. You are correct it is over and been over and Thompson prevails – thriving program, happy kids and swimming well. He is still on staff with the coaching staff he hired. No u hauls coming to pack him up anytime soon. GA swimming greatness/legacy as you referred to is gone – no worries alumni you can find it about five miles down the road not to say you ARE welcome to enjoy the successes of swimmers under the new GA coaching staff.

Really……you must be an administrator, and not a swimming enthusiast, otherwise you would look at the meet results and get a true sense of what has happened….the swift demise of GA swimming. Families have moved on and are having success at UDAC, PWAC, NPAC, EAAC, WCAC and elsewhere.

I am fairly certain that GAAC won the meet 2 years ago.

How many families walked away from GAAC this week? It is at least 5. If GA has not erased them from their database… Read more »

Brien Collier is my nephew and an upstanding, respectful, hardworking, kind, intelligent young man who has swam all over the world. No one in this thread has as the eclectic experience he does, nor the ability to speak to various swim clubs and teams. I am an old high school social studies teacher with a current bulletin board in my classroom highlighting the attributes of successful and unsuccessful people. Attributes of successful people: they embrace change, talk about ideas, compliment others, have a sense of gratitude. Attributes of unsuccessful people: they fear change, talk about people, criticize others, have a sense of entitlement. Which are you?

In addition, I must point out a great concern. First, GA is a private… Read more »

Erin, while your support of your nephew is expected and most certainly appreciated by him, you might want speak with him so he can sell the virtues of GA or do a little research on your own before spewing your elitist attitude to the public.
Germantown Academy is committed to creating a learning environment that is as diverse as the community it resides in and thusly, embraces not only all forms of race, gender, ethnicity, or religion, but also those from any socioeconomic status. There is a substantial financial aid budget to help those of less means who may work in “blue collar” jobs. You see, not every family here has a globe trotting executive at the helm. Even… Read more »

Hi Dr. Jones, Geoff Meyer, Norman Dale, James, Former GA Swim Fan, Greg, Herman, the Truth, and any other people that are trying to bring this teak down. My name is Brien Collier and I am one of the so called “brain washed” “zero effort” swimmers that Jeff has raised. I have two things to say to you.

First and foremost, if you truly had any appreciation for GA’S past present or future you would drop your egos and your preconceived notions of the team. GAAC and GA are not the same team they use to be! Get over it and move on. Everyone that has stuck on the team has done so and is looking ahead to what the… Read more »

Brien, I believe your anger and hostility is misguided as I think the majority of the posts, including my own, reveal that people feel it is the coaches who demonstrate a lack of respect for the deep history and traditions of the program. It is admirable that there are a few of you enjoying a good experience while trying to forge a new path as the program moves forward, however, it is undeniable that there are numerous others who have had a polar opposite experience under the current leadership, have voiced their opinion to the administration, and have been treated dismissively. Someone made a choice to go after the record. If it was the swimmers as a group, I understand… Read more »

Let’s get set the record straight- people are upset with the GA administration hiring of Thompson and their continual support for him when he does inappropriate things toward the GA swim community and its swimmers. Brien you are not even in this community 2 years, you have no idea what the GA swim community is about.

There are a handful of kids that remain in the senior program about 11( you don’t count grade school kids). This is a program that had upwards of 70-80 2 years ago. Why? Because Thompson has been mean, vindictive and rude to swimmers. Students have left the school, left the sport and don’t swim for their school because of him. Maybe you and… Read more »

Where are you getting the numbers in the senior program from?
As far as posting the petition that 27 kids signed and the 15 formal complaints made to administration go ahead and post it since you seem to have cut and dry info in your post.
clearly from your post you are someone close to the action perhaps even down the hall…..from the pool since you are able to keep such close tabs on the program and what goes on with Thompson.
All of this has done nothing more then make both sides of the party pathetic in the public eye.
The kids are the ones that have paid dearly for this when they should be… Read more »

Brien I am happy that you are so confident in expression to invite us all to watch you break Dave Whartons’ 200 free record, 1:38.20! Because you were living half a world away when Mr. Shoulberg was a coach you may not have heard a lot about Dave Wharton, aka Coach Shoulbergs most prized swimmer. Incredible accomplishment of itself to be Coach Shoulbergs most prized swimmer in that he produced many Olympians. At 18 he not only held the school record for the 200 free, but was named American Swimmer of the Year by Swimming World Magazine. I hope that you will be compassionate in spirit when you break the record to recognize the iconic man that’s name you will… Read more »