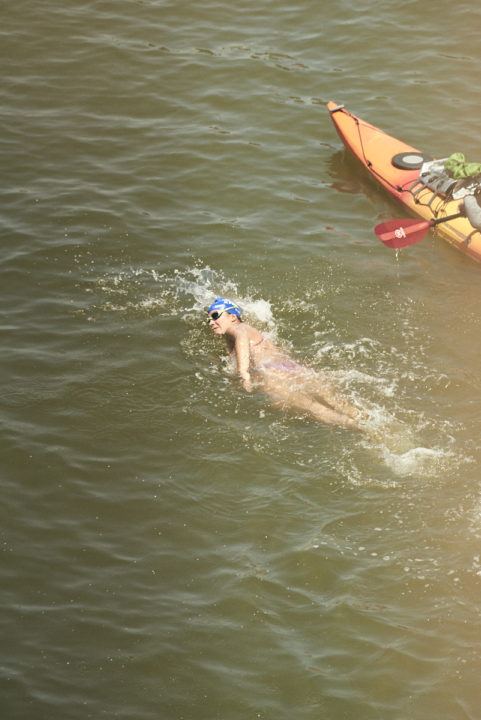 Nathalie Pohl completed the 46-kilometre 20 Bridges Swim, formerly known as the Manhattan Island Marathon Swim, in 8:12:37 hours as the third fastest European woman in the history of the swim and became the first German woman to complete the Triple Crown of Open Water Swimming. Current photo via James Farrell, Courtesy: Brigitte Astor

New York is Central Park, Fifth Avenue and Broadway. But the megacity on the Atlantic is also a city of water and a real hotspot for open water swimmers. The 46-kilometre 20 Bridges Swim, formerly known as the Manhattan Island Marathon Swim, is renowned as one of the toughest open water competitions in the world. And elite athlete Nathalie Pohl has mastered the challenge. She completed the demanding race in the exceptional time of 8:12:37 hours as the third fastest European woman in the history of the swim and became the first German woman to complete the Triple Crown of Open Water Swimming. There are only very few extreme swimmers able to boast this accolade, which is awarded to those who have swum the English Channel, the Catalina Channel and completed the circuit of Manhattan. The 23-year-old swimmer said of the competition: “I am absolutely delighted! Just the backdrop alone is incredible, but to have won the triple as well – it’s amazing! The tough training has really paid off and I have been rewarded with one of the most spectacular sceneries that open water swimming has to offer.

About 15 participants, 15 support boats and kayaks started out on the demanding course around the famous Statue of Liberty last weekend. Open water swimming has a long tradition in New York. There have been competitions held on the city’s waterways since the 19th century because the tough conditions seem to magically attract athletes. The Hudson River separates the heart of the city from New Jersey and links the Atlantic to the Great Lakes. The East River flows between Manhattan and the Bronx in the north and Brooklyn and Queens in the south. The different branches of the rivers in particular result in abrupt changes in current, making the route the sole preserve of professionals, requiring immense strength and concentration. Furthermore, the network of canals is in constant use, making the water quality rather poor since the New York/New Jersey port area is one of the biggest in the whole of the US. This was also a major change for the athlete from Marburg, who is used to competing in the open sea. “With boats and ships all over the place, New York wasn’t just physically demanding but also predominantly a mental challenge for me. Even a tiny distraction could be enough for me to completely lose my concentration,” Nathalie explains. In order to overcome this, it is necessary to prepare well, spending many hours in the water each day and containing specific training units with her coach Joshua Neuloh. Yet again, top class swimmer Adam Walker has given strong mental support to her from the support boat.

This training will also serve Nathalie well in August in one of her toughest battles with the sea so far – the fourth stage of the “Ocean’s Seven”, which involves the seven biggest challenges in the open sea. This stage will see Nathalie cross the 20-kilometre Tsugaru Strait between the islands of Honshu and Hokkaido in Japan. The elite sportswoman is optimistic: “The competition here in the US has made it clear that I really can achieve my goal if I just work hard enough at it. I am so looking forward to the great challenge in Japan!”

I’ve swum around Manhattan Island 3 times and I think it’s a great way to spend a day.

Wow that is amazing. I did my first open water swim last year, an embarrassingly slow 1500, and I have a newfound respect for these folks.

How safe is the New York water?

this is going something like 93.4 meters a minute for over 8 hours straight, must be a big current pushing her along!

… or a big shark chasing her

The Hudson does have a strong current. During the annual NYC Triathlon, many MANY swimmers are clocked in the 13:00-14:00 range for the 1500m swim, which, as we know, is well under the current pool world records by Sun Yang and Katie Ledecky.

That is so disgusting tho.

Very well written! Congratulations to Nathalie on a great swim.