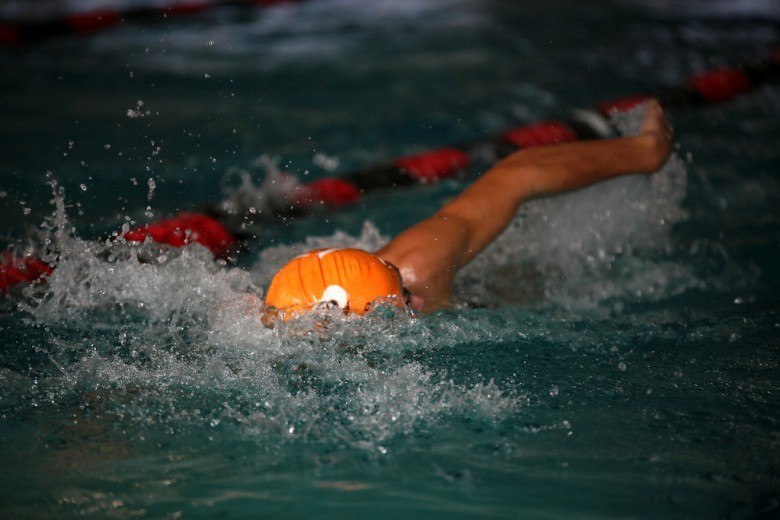 On the final day of racing at the Georgia Tech Invitational the Yellow Jacket men closed out the home win, taking three events and going 1-2-3 in the 200 fly. On the women’s side, Tennessee pulled away late after battling with Florida Gulf Coast over the first two days. The Lady Vols won three events including the final relay.

Tennessee powered out to an big lead in the team points by going 1-2-3 in the 1650. Freshman Madeline Tegner won in a lifetime-best 16:22.19, only about three seconds off the last time invited to NCAAs last year. Camryne Morris was second in 16:28.83 and Morgan Dickson took third in 16:40.73

Florida Gulf Coast struck back in the 200 back, though, with a freshman standout of their own – Kira Toussaint, who won her second individual event of the weekend going 1:56.50. Vanderbilt grabbed the next two spots with junior Chrissy Oberg (1:59.46) and freshman Chandler Soapes (2:00.00).

The 100 free was a 5-way battle between two lady Vols, two FGCU Eagles and one Georgia Tech Yellow Jacket. Tennessee’s Faith Johnson cut two tenths off her prelims swim to touch out FGCU’s Sara Hamilton 50.22 to 50.24. Gulf Coast junior Emma Svensson led at the 50 mark, but faded to third in the back half, going 50.34 Tennessee’s Lindsay Gendron was fifth at the halfway point but put up a huge second split to rally for fourth in 50.43. Finally, Georgia Tech’s Chiara Ruiu took fifth, going 50.80.

In a session that saw victories spread out among multiple teams, Florida Atlantic got in on the action, winning the 200 fly with junior Annette Kovacs, who went 1:58.71. She beat Tennessee’s Heather Lundstrom (2:00.51) and Vanderbilt’s freshman Kayla Moran touched out Gulf Coast’s Nina Schiffer for third, 2:01.30 to 2:01.40.

Tennessee closed out the weekend by winning the 400 free relay with the team of Lindsay Gendron, Kate McNeilis, Harper Bruens and Faith Johnson going 3:21.18. Gendron was 50.42 leading off and Johnson had the fastest split of the event, going 49.47 from her anchor position. Gulf Coast took second, led by Kira Toussaint‘s leadoff leg of 50.33, the fastest of the event.

Ultimately, Tennessee took the team title by just under 100 points. Gulf Coast was second with about a 100 point cushion of their own over Georgia Tech.

Tennessee had two of the top three divers on the men’s side. Maurico Robles Rodriguez was the winner, scoring 380.30 on platform. Michael Howell was third with 371.25. In between was Georgia Tech freshman Brad Homza, who scored 374.35.

Georgia Tech junior Elliott Brockelbank won the 1650 two days after pacing the field in the 500 free. He faced a stiff challenge from Tennessee’s David Heron, who made a late charge, overcoming a 3-second lead to bring the race down to a tenth of a second. Brockelbank finished in 15:21.94, while Heron was 15.22.09. Three more swimmers came in within a half-second of each other in the battle for third: Tennessee’s Sam Peterson (15:39.48), Georgia Tech’s Michael Kenny (15:39.52) and Georgia Tech’s Yuval Safra (15:39.92).

Luke Percy kept things rolling for the Vols, winning the 100 free in 43.48, a time that ranks 5th in the NCAA right now. Georgia Tech junior Andrew Kosic joined him under 44, going 43.97 in what was a season-best perfomance at the time (he bettered that time leading off the 400 free relay later in the night).

The 400 free relay was a tight race the entire way, with Tennessee overtaking Georgia Tech in the final leg to win. The Vols team of Gustav Aberg Ledjstrom, Troy Tillman, Sean Lehane, and Luke Percy went 2:56.55 to Georgia Tech’s 2:56.83. Georgia Tech took the early lead on Andrew Kosic’s season-best 43.88 leadoff leg and held a narrow lead through the next three splits, although the Vols were closing the gap steadily. Even though Tech anchor Nico van Duijn went 43.6, it wasn’t enough to hold off Tennessee’s Percy, who went a blazing 43.0 to take the win.

Even though the relay went to the Vols, the meet ultimately went to Georgia Tech. They won by over 200 points. Tennessee was second and Florida Atlantic third.