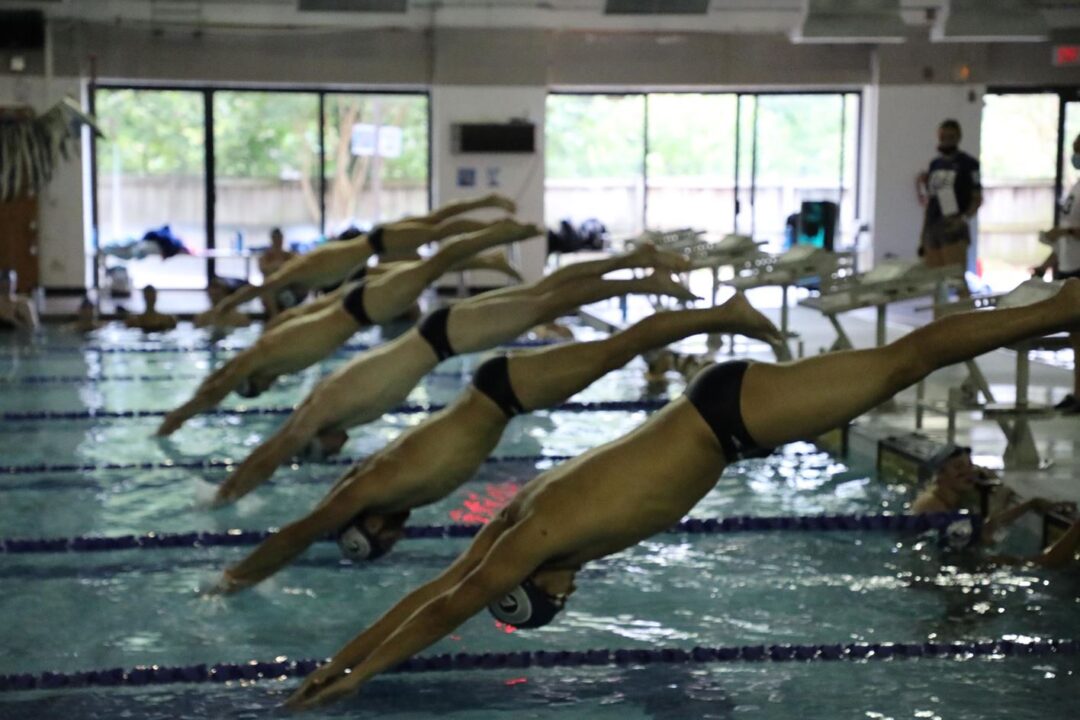 The Georgetown men suffered their first loss of the season against Johns Hopkins, while the women secured a win to take their season to 3-3. Archive photo via Georgetown Athletics

WASHINGTON – Georgetown University’s men’s and women’s swimming & diving teams split with the Johns Hopkins University Blue Jays at McCarthy Pool on Friday. The women’s squad moved to 3-3 on the season with a 153-140 victory while the men fell to 5-1 with a 170-124 setback.

“It felt great to be back at Yates competing,” Head Coach Jack Leavitt said. “I’m really proud of the effort and our team taking advantage of the opportunity to compete while they’re beat up from training. Looking forward to getting back after it tomorrow against GW.”

ON DECK
GU will return to McCarthy Pool tomorrow afternoon against George Washington, beginning at 1 p.m. The Hoyas wrap up the regular season at home with Senior Day against conference foe Seton Hall on Saturday, Jan. 29 at 1 p.m., before heading to the BIG EAST Championships in New York (Feb. 23-26).

Top Finishers
• Hopkins opened the meet with second and fourth-place finishes in the 200 Medley Relay. Juniors Steven Rua and Kyle Wu, senior Jeff Vitek and graduate student Nat Davenport finished in 1:33.26 to finish in second place by just two-tenths of a second. Senior Max Chen, freshman Mitchell List, sophomore Reef Ide and senior Noah Frassrand placed fourth with a time of 1:35.41.
• Sophomore Kellen Roddy then cruised to a 24-second in the 1000 Free as he touched in 9:20.24. Freshman Jonik Surprenant placed second in 9:45.55.
• The Blue Jays went one-two in the 200 Free, led by Noah Corbitt‘s time of 1:40.57. Junior Collin Hughes clocked in at 1:43.82 to place second by just 0.15 seconds.
• Senior Dylan Wachenfeld finished in second place in the 100 Back with a time of 52.32. Rua finished in fifth place in 53.08.
• Chen followed with an easy win in the 100 Breast as he beat the field by 4.24 seconds. His time of 54.83 is an NCAA B time.  Junior Tristan Lin finished in fourth place with a time of 59.68.
• Hopkins grabbed the top two spots and three of the top four in the 200 Fly. Vitek led the way with a winning time of 1:52.18. Sophomore Chris Seymour took second in 1:53.90 and graduate student CJ Arena placed fourth in 1:56.92.
• Davenport and Wu then went one-two in the 50 Free for the Blue Jays. Davenport clocked in at 21.32 to earn the win while Wu finished in 21.59.
• Davenport picked up his second straight win as he took the top spot in the 100 Free with a time of 47.16. Hughes finished in fourth place as he clocked in at 48.11, just five hundredths of a second out of third.
• Wachenfeld grabbed a win in the 200 Back, winning by nearly two seconds, with a time of 1:50.58.
• Chen earned his second win of the afternoon, and swept the Breast events, as he clocked in at 2:03.11. His time was also an NCAA B time. Freshman Eric Ji placed third in 2:08.63 while classmate Joe Castagno finished fourth in 2:09.71.
• Roddy followed his second win of the meet as he took first in the 500 Free with a time of 4:34.06. Surprenant finished in 4:41.63 to finish in third place.
• Vitek continued the streak of repeat winners as he beat the field in the 200 Fly with a time of 50.14. Ide edged out Seymour for third place by just a tenth of a second (53.13).
• In the final individual event of the night, the 200 IM, Wu earned the win as he finished in 1:53.22. Freshman Nathan Jin took fourth place with a time of 1:56.41.
• The Blue Jays wrapped up the day with a win in the 200 Free Relay. Chen, Vitek, sophomore Jay Heymann and Davenport combined for a 1:23.85 to beat the Hoyas by nearly a second. Junior Spencer Ryan, Hughes, Corbitt and Ji finished in third place with a time of 1:26.24.

Up Next
• Hopkins returns to action on Friday, February 4 at the Cavalier Invitational in Charlottesville, VA.

Up Next
• Hopkins returns to action on Friday, February 4 at the Cavalier Invitational in Charlottesville, VA.