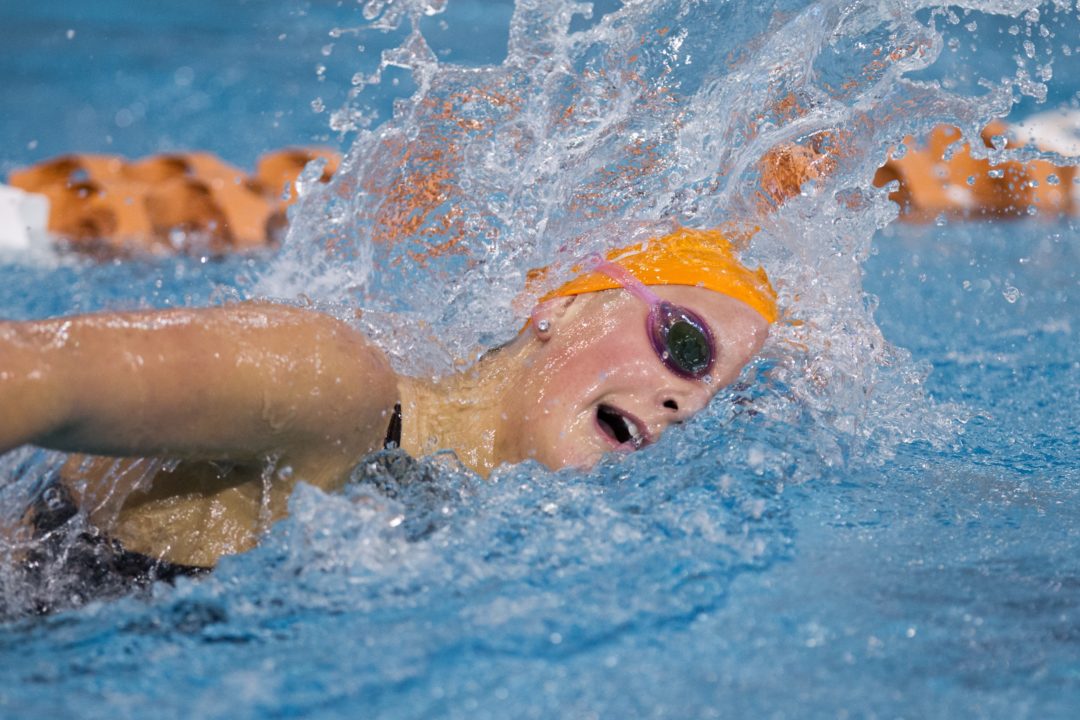 Tennessee took advantage of a relay DQ by Florida Gulf Coast to open up a lead while the Yellow Jacket men continued to extend their lead on day two of the Georgia Tech Invite. Archive photo via Tim Binning/TheSwimPictures.com

The Tennessee women, leading Florida Gulf Coast by just 2 points after day one, got a big night from Lindsay Gendron, who swam 4 events and won 3 of them, to build a more comfortable lead going into the final day of competition. The Volunteers also benefitted from a medley relay event that saw three teams, including FGCU, disqualified for false starts.

Though the Tennessee men won a trio of events, the Georgia Tech men continued to increase their overall points lead, now sitting about 200 points up on the Vols. Nico van Duijn continued to swim well for the Yellow Jackets, winning one event and putting up two great relay splits in winning team efforts.

The Florida Gulf Coast women, who were surprisingly strong Friday night, hit some major adversity in the night’s first event. It’s winning 200 medley relay was disqualified when anchor Christina Tanninen false started. FGCU would have won the event by three tenths over James Madison. The event saw a number of disqualifications as Florida Atlantic and Vanderbilt were both DQ’d for false starts by their butterflyers. After all the DQ dust settled, James Madison’s team of Kacy Edsall, Sin Hye Won, Shannon Dubay and Susanne Gingher took first place with a time of 1:40.26 that included a 24.0 butterfly split on Dubay and a 22.4 from Gingher on free. Tennessee came in second in 1:41.47.

Lindsay Gendron won in an off event for Tennessee, taking the 400 IM in 4:17.89. She overcame a somewhat rough finish to the breaststroke leg (with Vanderbilt’s Elly Faulkner making a strong charge) to finish with a big freestyle leg to retake the lead and win. Faulkner was second in 4:21.17 – she was also swimming a bit of an off event, as she’s known mostly as a breaststroker for the Commodores. Lauren Driscoll took third for Tennessee in 4:22.10, which started to open up more of a points lead over Gulf Coast.

Miami sophomore My Fridell gave the Hurricanes their first win, taking the 100 fly in a time of 53.70. The Swede was followed by FGCU’s Emma Svensson, who went 54.65. Third place was Lindsay Gendron, taking on the tough 400 IM/100 fly double for the Volunteers; she went 55.05.

But Gendron wasn’t done for the day yet. In what was undoubtedly a tough training excercise, Gendron came back to win the 200 free, going 1:46.79 and running away from the field in the back half. That’s 700 yards of race-pace swimming for Gendron in a short time frame – and she took home two wins and put up two lifetime bests along the way. FGCU’s Kira Toussaint was second, going 1:48.58. The Dutch freshman is having a nice meet so far for the Eagles. Georgia Tech’s Hailey White was third overall in 1:49.18

James Madison won its second event of the night when Sin Hye Won went 1:01.24 to win the 100 breaststroke. She spent the event locked in a tight battle with Vanderbilt’s Elly Faulkner, who went 1:01.71. Tennessee’s Molly Hannis was in the hunt at the 50 but faded a bit coming home, finishing at 1:02.25.

Tennessee had started to pull away in the team race by this point, but Florida Gulf Coast started to reel things back in with a win in the 100 backstroke. Freshman Kira Toussaint picked up her first individual win of the weekend, going 52.62 to blow away the field. That time is still a half-second off the NCAA A cut, but also would have easily gotten an invite to the NCAA championships last year. Vanderbilt’s Chrissy Oberg took second, going 55.25, and Toussaint’s FGCU teammate Emma Svensson was third in 55.88.

But the Volunteers answered back by winning the 800 free relay to close the evening. The team of Mary Griffith, Faith Johnson, Lauren Driscoll, and Lindsay Gendron went 7:20.73, powered by Gendron’s 1:47.9 split in her fourth swim of the night. James Madison touched out Georgia Tech for second place, 7:24.14 to 7:24.67.

The win boosted Tennessee’s lead to 60 points; they led by only 2 after last night. Much of that deficit can be contributed to Gulf Coast’s medley relay DQ, which cost the Eagles 52 points. The meet will wrap up tomorrow, giving Gulf Coast one more day to make another run at the Volunteers.

Georgia Tech’s men opened up the meet with a narrow victory in the 200 medley relay after losing the 400 medley to Tennessee to close last night. Spencer Johnson, Mark Sarman, Nico van Duijn and Andrew Kosic were 1:29.03, just a hair ahead of the Volunteers 1:29.23. Van Duijn continued to be a huge relay factor this weekend, going 21.4 on the butterfly for Georgia Tech. Kosic was also 19.4 on the relay after winning the open 50 last night.

In the 400 IM, Tennessee’s Tristan Slater grabbed the lead on the backstroke leg and never looked back. He went 3:56.52, a season best.  Georgia Tech’s Andreass Nilsson was second in 3:58.46, barely holding off teammate Michael Kenny, who went 3:58.86 and was surging towards second on the final 100. Yellow Jackets freshman Chase Gutknecht was fourth in 4:02.22.

Georgia Tech came back to go 1-2 in the 100 fly, with a pair of big swims from juniors Nico van Duijn and Andrew Kosic. Van Duijn went 47.33 to win after clocking 47.15 in prelims. Kosic was 47.61. There have been a bunch of fast 100 fly swims already this weekend, but van Duijn should be in the top 5 NCAA times at this point. Tennessee’s Sam Rairden went 48.57 for third, followed closely by Georgia Tech’s Mark Sarman (48.94).

A trio of men stuck together up and down the pool in the 200 free, with all three going 1:37s and finishing within one tenth of a second in an entertaining battle. Tennessee’s Gustav Aberg Ledjstrom jumped out to the early lead and held off a late charge from Georgia Tech’s Mats Westergren to go 1:37.74 for the win. Westergren went 1:37.76, swimming past FAU’s Matthieu Burtez in the final 50. Burtez went 1:37.82 for third. Georgia Tech’s Declan Poorman was fourth in 1:38.20.

Georgia Tech’s Mark Sarman jumped into the 100 breaststroke for the first time this year and won, going 55.75 to beat teammate Anton Lagerqvist‘s 56.20. Tennessee’s Renato Prono, a returning NCAA invitee, was just a hundredth back at 56.21.

Tennessee stormed back to 1-2 the 100 backstroke, though, with sophomore Sean Lehane going 51.66 and junior Sam Rairden going 52.15. They both beat out Georgia Tech’s Nicholas Coletti, who was 52.60, and Tennessee picked up more points with Jimmy Dagley‘s fourth place finish.

Georgia Tech wrapped up the evening by taking the 800 free relay in 6:31.36. The team of Andrew Kosic, Mats Westergren, Declan Poorman and Nico van Duijn topped Tennessee with van Duijn continuing his relay heroics and splitting 1:36.8. Tennessee was 6:39.20 for second place and Florida Atlantic took third in 6:40.48.

Not sure how or why FGCU was “surprisingly strong” …. this program had the 12th best recruiting class in the country last year, and the previous year they were top 25. They’ve been to NCAA’s the past two years, and are routinely ranked among the top mid-major programs in the country.

Wasn’t meant to take anything away from FGCU’s program. Pushing a team like Tennessee (3rd at NCAAs in 2013, likely a top-5 program this year) is a big deal, even compared with FGCU’s previous successes.