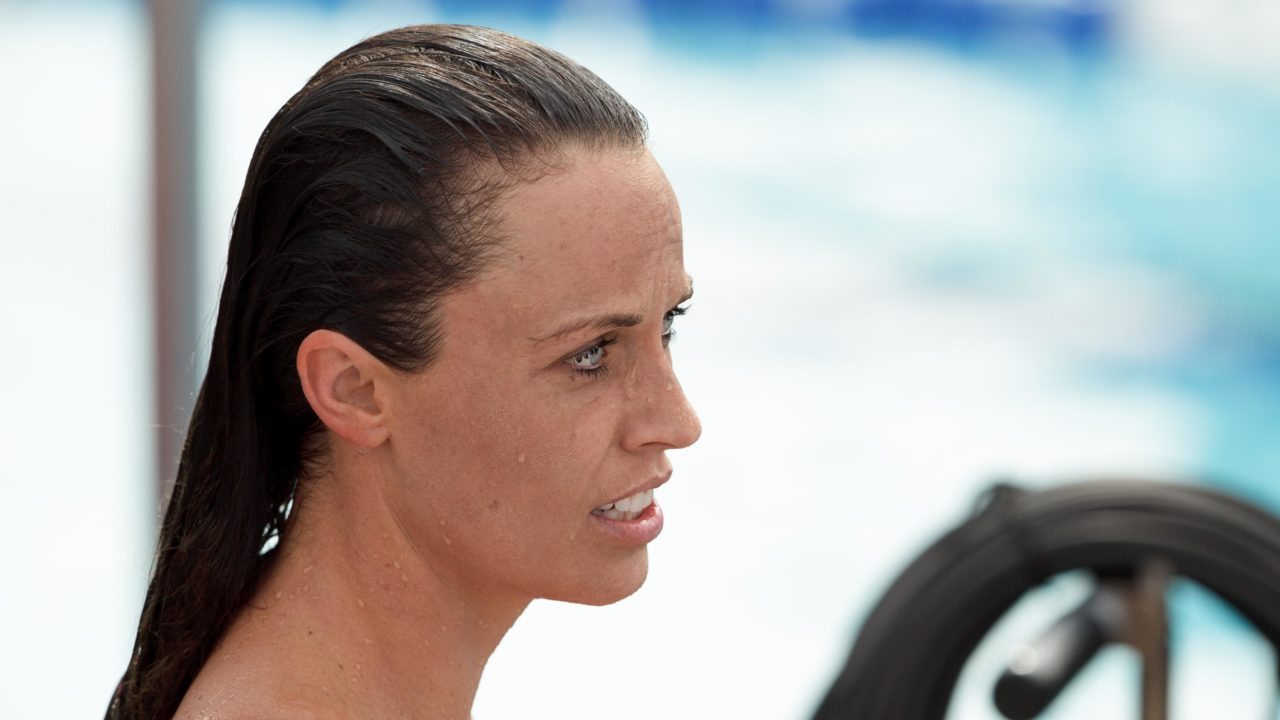 Amanda Beard had a moment of deja vu in the pool in Omaha. (Photo Courtesy: ©Tim Binning/TheSwimPictures.com)

Friday saw the first day of competition at the 2012 Swimvitational in Omaha, Nebraska – a first test for the pool that in three weeks will descend into the chaos of the US Olympic Trials.

If this meet is a warmup for those Trials, then Arizona’s Margo Geer started things off right by heating the pool up in the women’s 100 free. The short course star (likely only a few days into the beginning of her taper) swam a 54.98 to earn the first win in this pool – and set a new personal best. She becomes the 10th American to go faster than 55 seconds this year, and will sit seeded at trials just behind her college rival Liv Jensen. Both swimmers are due for breakout years in long course – and could be battling for final Olympic relay spots if they continue to improve.

Nobody was close to Geer, with comebacker Rhi Jeffrey taking 2nd in 56.06 – a quarter-of-a-second slower than she was in prelims. Wisconsin’s Beckie Thompson was 3rd in 56.63, and Arizona’s Alyssa Anderson tied her personal best from the morning with another 56.67 – this one placing her 4th overall.

Notable swims from youngsters included 16-year old Mary Schneider from Illinois taking 5th in 56.98. The swimmer, who trains with a great age group club the Academy Bullets, is probably a year away from being on a senior National Team, but has tons of potential. Winning the C-Final was 14-year old Jordan Stout from the Rockwood Swim Club in 57.95 – a best time for her. She still hasn’t hit a trials cut, but will be targeting big swims at the U.S. Open and Junior Nationals later in the summer.

In the men’s 100 free, South African Roland Schoeman won in 49.07. He’s targeting a 50 for the Olympics, but could still be a relay swimmer in this 100. Regardless of what he ends up swimming at the Olympics, this is a fantastic time for him, and the fastest he’s been since 2009. His countrymate Darian Townsend was 2nd in 49.85. The top-finishing American was Iowa’s Jordan Huff in 50.91. He’s going to be a big piece of Iowa’s rebuilding season in 2013.

Winning the B-Final was 16-year old Georgia high schooler Paul Powers in 52.44 – a best time. He won the Georgia State Championship in the 50 free last year as a sophomore and was 2nd in the 100.

After those 100 frees, things cooled off significantly.

The women’s 200 breast was won by Wisconsin post-grad Brittany Kimmitt. That’s not the Badger you’d think would win this race (Ashley Wanland was 3rd in 2:33.30), but is a breakout for her. She really didn’t make a huge impact in college – she finished a respectable 8th at Big Ten’s during her senior season – but is en route to maybe surprising people as a post-grad. Her 2:31.45 is a best time by a full second.

Amanda Beard actually touched first in that race in 2:28.23, but was disqualified after an official called her for an overwater recovery (specifically, her elbows leaving the water as she extended them forward). In a twist of fate, she was DQ’ed for an identical infraction at this same meet in 2008 – though that didn’t keep her from making the team.

And finally, Giles Smith was the winner in the men’s 100 fly in 53.24, which is his best in-season time ever. For a swimmer who is shooting for an Olympic Trials final at least, that’s a good time. Many of the Arizona swimmers (the men’s breaststrokers withstanding) look about where they should be 17 days prior to the start of Trials.

Not many interesting times! Good 200 breaststroke for Kevin Cordes. It’s very promising for the shortest distance, his best event.